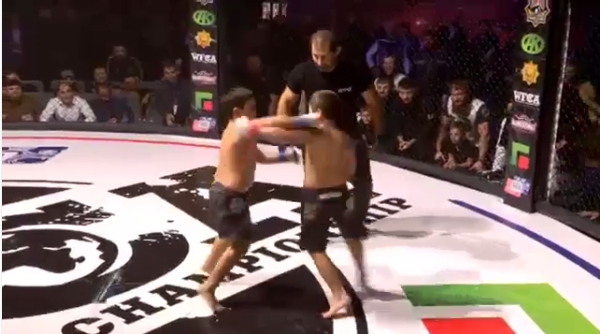 Kadyrov featured a video of his son entering the ring to music, lights and fanfare on his Instragram account.

The children who participated in the fights wore no head protection, and can be seen kicking and punching each other. All three of Kadyrov’s sons won their fights, receiving gold medals for their exploits. Kadyrov told one of his sons after sucker-punching his opponent, that he was exhibiting “real masculine character.”

Kadyrov is a colorful figure in Russia and has a tenuous relationship with Russian President Vladimir Putin. He has been linked to numerous murders and brutally suppresses any dissent. “We can’t complain. Because the second we do in person or over the internet, we’ll disappear,” one prominent Chechen told The Wall Street Journal in August.

Kadyrov’s child-fighting tournament appears to have violated Russian law, which mandates that children under 12 should not participate in competitive MMA, and that anyone under 21 years of age should be wearing protective headgear.

“I am outraged by the fact that the head of Chechnya was watching over it. Didn’t [the Chechen] sports minister tell him about the fact that children under 12 cannot participate in MMA under any circumstances,” head of Russia’s MMA Union Fedor Emelianenko told Russian state media.