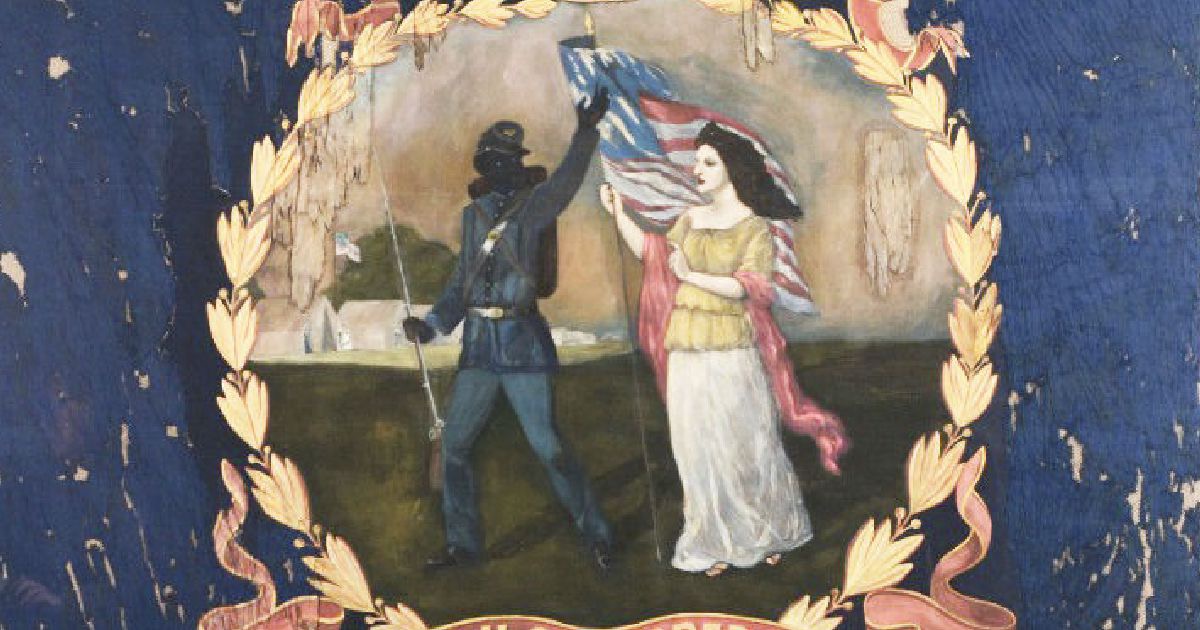 A rare artifact of the Civil War that was carried into battle by an African American regiment has been purchased at a historic price by the Atlanta History Center.

A regimental flag of the 127th United States Colored Troops that was acquired by the center is one of less than 25 known flags carried by African Americans during the Civil War.

The United States Colored Troops was a special branch of the U.S. Army that was made up of about 180,000 African Americans and formed after the Emancipation Proclamation of 1863.

The flag went up for auction on June 13 at Morphy Auctions in Denver, Pennsylvania, a city about 60 miles west of Philadelphia.

The Atlanta History Center is a Civil War museum located in Buckhead district of Atlanta that typically does not make major purchases for its collections. The purchase of the flag at $196,800 made it the highest purchase of an artifact ever for the center.

The organization’s leadership said they saw an opportunity to “expand its narrative about the often-forgotten service of the United States Colored Troops during the Civil War.”

“We want to tell the entire story of the Civil War and how it impacts our country,”said Sheffield Hale, president and CEO of the Atlanta History Center. “This flag is worth it in exhibit value alone. It’s one of those things that doesn’t need words to tell you what it is and what it represents.”

The flag is 72 inches by 55 inches, made of silk, and depicts an African American soldier carrying a rifle and waving goodbye to Columbia, the female personification of liberty.

A motto above the soldier reads: “We will prove ourselves men.” On the opposite side of the flag, the American bald eagle wears a ribbon with the nation’s motto, “E Pluribus Unum,” which means “Out of many, one.”

Before the center’s acquisition, a sizeable portion of the flag’s silk that had deteriorated was restored and framed at the Grand Army of the Republic Civil War Museum and Library in Philadelphia where it lived for decades.

It is one of at least 11 flags painted by David Bustill Bowser, a portraitist, anti-slavery activist, and son of a fugitive slave, who lived from 1820-1890. Bowser owned a thriving banner and sign business in Philadelphia, so he was chosen to design regimental flags for black union troops. Bowser also painted iconic portraits of President Abraham Lincoln and abolitionist John Brown.

“Bowser’s works were the first widely viewed, positive images of African Americans painted by an African American,” according to the Pennsylvania Historical and Museum Commission.

The 127th were formed and trained at Camp William Penn near Philadelphia in 1864. Federal black regiments were formed because they could not join state troops, said Joseph Becton, an associate of the Philadelphia African American Museum, to the AP.

Soldiers of the 127th were active, serving in missions, including the siege of Petersburg, Virginia, in 1864, and when the Confederate Army of Northern Virginia surrendered in April 1865 at Appomattox Courthouse.

Objects that represent the regiments of the United States Colored Troops are extremely rare, the Atlanta History Center notes.

The center says that it is not known how many of the soldiers of 127th were formerly ensalved, but many were volunteers, while others were drafted. It also notes that though the units were segregated and commanded by white officers, the United States Colored Troops represented the country’s “revolutionary shift from slavery to freedom and beyond.”

Other artifacts of the United States Colored Troops exist. The Maryland Historical Society in Baltimore is the closest destination to the center that holds another flag from the same military branch. The others can be found in New York, Connecticut, Ohio, and Kansas.

Joshua Nelson, a journalist and filmmaker, is a graduate of the Young Leaders Program at The Heritage Foundation.