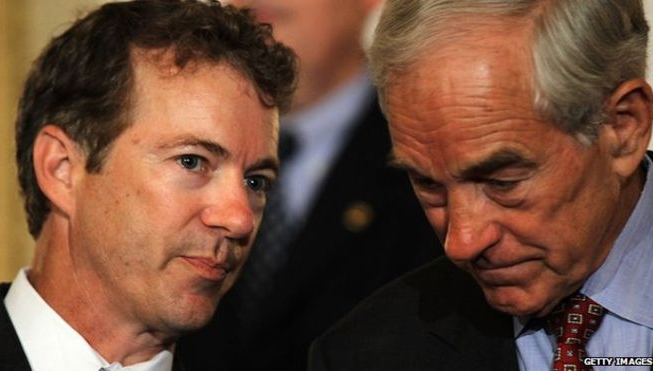 As presidents and Congresses come and go, the addiction to busting the budget remains; its voraciousness fueled by the same enabler, the Federal Reserve.

While it took our nation more than 225 years to accumulate nearly $20 trillion in debt (and much, much more if you factor in unfunded liabilities), our central bank can put Americans on the hook for trillions without blinking by simply creating whatever funds it needs out of thin air. Its status as “the lender of last resort” signs a blank check for politicians to spend to their heart’s content without worrying about the immediate consequences.

When pressed to at least provide some measure of substantive transparency for its actions, the Fed tells the American people it’s none of their business.

Though one of the Fed’s mandates is to keep prices stable, a trip to the grocery store is enough to prove its failure. The Minneapolis Federal Reserve Bank’s own website hosts a calculator that reveals that what would have cost you $1 in 1913 would now require $24.

We may chuckle when parents and grandparents tell children about the “good ol’ days” of lower prices, but the massive decline in the dollar’s value is no laughing matter for seniors whose supposed safety nests don’t stretch as far as they used to, or for frugal consumers who are punished for saving for rainy days. Politicians pile debt onto future generations’ backs, and the Federal Reserve makes sure they can’t ever hope to pay for it.

Meanwhile, Americans struggling to cover basic costs watch as favored parties receive bailout after bailout from friends in high places. If you care about income inequality, then you must start fostering change by holding the Fed accountable.

The big-spending status quo is powerfully entrenched, but a growing political coalition, driven by overwhelming support from the American people, is fighting to assert Congress’s right to know the facts about how the Fed is using its tremendous power.

Audit the Fed, which has now passed the U.S. House of Representatives multiple times and received majority support in the Senate, removes the shackles on how the nonpartisan, independent Government Accountability Office (GAO) can examine the Fed.

The bill would authorize the first-ever thorough audit of the entire Federal Reserve System in its 104-year history, including its agreements with foreign governments and central banks, discount window and open market operations, member bank reserves, and Federal Open Market Committee (FOMC) directives. Congress would require the GAO to conduct this audit within one year of the bill’s passage and to report back within 90 days of its completion.

The biggest opponent to auditing the Fed is, unsurprisingly, the Fed.

The Fed harnesses its moneymaking machine in an all-out lobbying effort against transparency on its activities. The conflict of interest, with the Fed lobbying against its own audit, should make us question whether such lobbying should be forbidden by law.

The Fed argues that: 1.) It is already audited enough; and 2.) Any further “interference” would threaten its independence and represent a takeover of monetary policy by Congress, with disastrous results.

While it is true that an outside auditor examines the Fed’s financial statements, and that an inspector general also keeps an eye on its activities, Paul-Martin Foss, President and Executive Director of the Carl Menger Center for the Study of Money and Banking, reminds us that both are appointed by and answer to either the Federal Reserve Board or the Fed Chair directly. This amounts to, as he states, the Fed saying, “[W]e can audit ourselves if we want to, so just trust us that we’ve investigated ourselves and found ourselves fully trustworthy.”

The GAO’s opinion is that, while the Fed is subject to limited audits, “no complete audit is done.” The GAO went on to say, “We do not see how we can satisfactorily audit the Federal Reserve System without authority to examine the largest single category of financial transactions and assets that it has.”

As Foss further observes, “The full audit called for by Audit the Fed would necessarily include not just a financial audit (if that were determined to be necessary), but performance and operational audits as GAO is accustomed to carrying out.”

Perhaps the Fed’s real fear is the American people finding out the extent to which the Emperor is parading around without his clothes.

“If the Fed examiners were set upon the Fed’s own documents—unlabeled documents—to pass judgment on the Fed’s capacity to survive the difficulties it faces in credit, it would shut this institution down,” Grant’s Interest Rate Observer founder and editor Jim Grant said on CNBC in 2009 – when the Fed held half the assets it does now.

In December, Alex J. Pollock, former CEO and president of the Federal Home Loan Bank of Chicago, estimated the Fed would fail if subjected to “a simple and standard interest rate stress test,” with it being “highly likely” the Fed would “be hugely insolvent on a mark-to-market basis.”

What about the Fed’s second argument? Would increased scrutiny threaten its independence or create a global economic catastrophe?

When Congress required the Fed to reveal the details of more than 21,000 transactions it made during the 2008 financial crisis that involved trillions of dollars, the sun still rose and Fed officials went about their jobs without a congressman sitting in each of their offices.

Do you remember the chaos that erupted after Bloomberg won its lawsuit to force the Fed to disclose even more details about the specific recipients of its emergency lending?

Neither do we, despite the Fed promising doom.

Though the Fed will claim that further soliciting the GAO’s opinions on its policies and procedures would cause irreparable harm, recent history proves otherwise.

After Congress expanded the GAO’s authority to allow for a one-time audit of the Fed’s emergency activities between Dec. 1, 2007, and July 21, 2010, the GAO made seven recommendations to improve the Fed’s operations, noting, “The Federal Reserve Board agreed that GAO’s recommendations would benefit its response to future crises and agreed to strongly consider how best to respond to them.”

In a letter also included in the GAO’s report, Fed General Counsel Scott Alvarez wrote, “We appreciate the GAO’s substantial efforts to review these complex programs and the understanding of these programs that your report demonstrates.”

There is no reason not to keep expecting such professionalism and expertise from the GAO.

Throughout its existence, the Fed’s manipulation of interest rates and expansion of the money supply have led to malinvestment and helped generate a devastating boom-and-bust cycle that routinely levels our economy as the market corrects course.

We hear no shortage of tales about how the Fed rescued the nation during the financial crisis, but this is the equivalent of someone pushing you into an icy lake and expecting you to thank them for saving your life after they pull you out.

Time is of the essence. The Federal Reserve cannot be allowed to continue denying full accountability to the hundreds of millions of people whose financial futures hinge on its actions.

We cannot wait until we find ourselves slipping underwater to ask the tough questions about what keeps putting us there.

With President Trump indicating his support for Audit the Fed, the window of opportunity has never been more open.

If we hope to ever rein in spending, change a failed status quo and avoid paralyzing downturns, we must not let it slip away.

Ron Paul is a former U.S. congressman from Texas. Rand Paul is the junior U.S. senator from Kentucky.

EDITOR’S NOTE: This op/ed was originally written and published for Rare.us, and is being used with expressed permission from the authors.