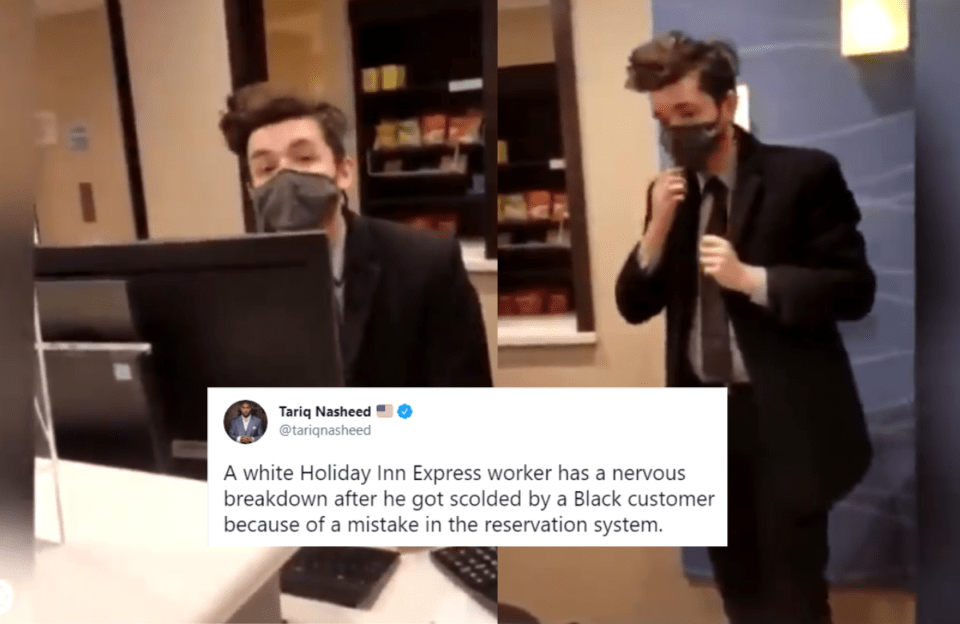 Last Sunday, a video of a Holiday Inn employee having a ‘meltdown’ while being berated by an angry customer went viral. It exploded on Twitter when self-proclaimed ‘race-baiter’ Tariq Nasheed tweeted the video, implying that the young, white employee lost control because he was racist.

A white Holiday Inn Express worker has a nervous breakdown after he got scolded by a Black customer because of a mistake in the reservation system. pic.twitter.com/KUEyqUSgsM

While we don’t know what preceded the start of the recording, about 19 seconds in the young man can be heard responding that he has “mental issues.” The man recording continued his tirade, telling the desk clerk that he was recording him. After the distraught employee began to hit himself and smash the computer monitor into his head, he began to sob, saying, “you’ve ruined my life.” The guest then attempted to follow him, laughing, as he went into a back area, presumably in an attempt to calm down.

Nasheed’s attempt to expose another instance of supposed racism instead resulted in a backlash against both the hotel guest and Nasheed. The overwhelming majority of responses expressed support of the Holiday Inn staff member and disgust with Nasheed and the man behind the camera.

Roses are red
Violets are blue
The guy who filmed this is garbage
And clearly you too pic.twitter.com/hYkqLGi62E

Why did you mention he's white & you're black in this tweet? Are you insinuating this was an act of racism? Why are you trying to ruin the life of a man who suffers from mental illness? His life is difficult enough without people like you actively trying to make it a living hell.

Although this has not been verified with the hotel management, he also stated that while he has quit the position at the hotel, the management supported him and the guest was “ejected from the hotel for escalating issues with staff and the owners.”

Some felt like people should not continue to share the disturbing video, but doing so was the only way to express support for this young man. Once considered a taboo subject, publicly talking about mental illness and how we cope with it begins to remove the stigma that has long accompanied it. Seeing real life examples of the struggles of those with mental illness elicits increased empathy and understanding, making us better as individuals and as a society.

What was meant for evil has been used for good. Shortly after the video, people began looking for ways to help the devastated hotel employee. Jeremy Hambly of The Quartering set up a GoFundMe which amassed over $30,000 in the first 24 hours. He eventually made contact with the man in the video, who we now know is named Caleb. He transferred the GoFundMe account to Caleb as donations continued to pour in.

Just had about a 30 minute phone call with Caleb (Holiday Inn Guy) what an amazing person, so kind & so thankful for all your support. He is getting me his information so I can pass off the GoFundMe directly to him. 🙂 So proud of you all

1.Caleb Has Taken Over The GoFundMe
2.Holy Shit?!?!
3.Keep It Up! pic.twitter.com/hiRNHoALZP

As of Wednesday afternoon, the fund has skyrocketed to over $90,000.

Are You Democrat or Republican? Your car reveals everything