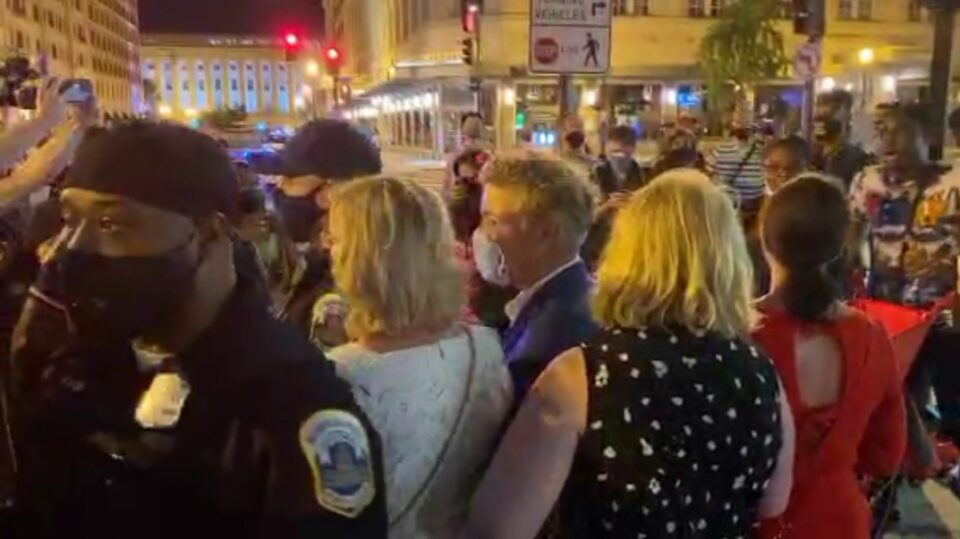 Rand Paul has been fighting for police reform since he got to Congress.. and it didn't matter tonight.

The entire confrontation was recorded by Jack Murphy in a 17 minute clip who stated that he had cautioned Paul to walk a different direction, but still attempted to continue to his destination.

In the video, protesters surround and chant at the Pauls until police show up to escort them to their hotel, using their bicycles as buffers between the senator and the protesters. Along the way, Kelly Paul appeared to lose a shoe which was taken by a protester and waved in the Senator’s face.

Clearer video from the incident also emerged showing a police officer protecting the Pauls being shoved and falling backwards, with Rand Paul stopping to steady the officer and prevent him from falling over backwards.

Watch the short clip below.

Rioters have surrounded Senator @RandPaul and @KelleyAshbyPaul outside the White House tonight. This madness needs to end @realDonaldTrump pic.twitter.com/auFBJmUkQS

Just got attacked by an angry mob of over 100, one block away from the White House. Thank you to @DCPoliceDept for literally saving our lives from a crazed mob.

We were surrounded and unable to move until @DCPoliceDept arrived with officers on bikes creating a moving barricade to get us to safety.

Watch the full 17 minute video from Jack Murphy below, from the altercation beginning to Rand and Kelly finally arriving safely to their destination.

Top 4 Simple Reasons Why You Should Hire a Corporate Lawyer