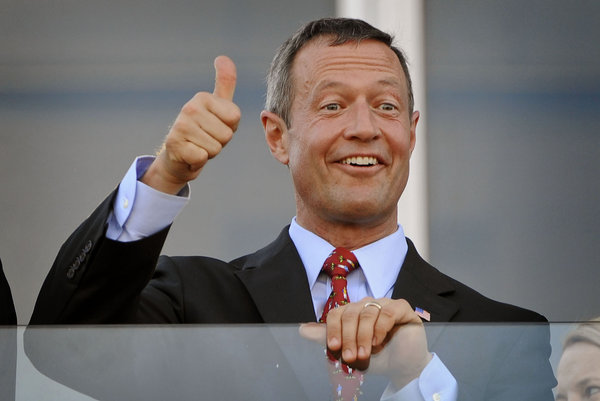 Democratic presidential candidate Martin O’Malley may have endured the lowest point of his long-shot presidential bid Monday night, when he held a campaign event in Iowa and only one person showed up. And that one person wasn’t even an O’Malley supporter.

The winter storm pounded the Midwest Monday night, canceling many campaign events, but O’Malley forged ahead, hitting each of his scheduled appearances.

During a Tuesday morning appearance on MSNBC’s “Morning Joe”, O’Malley revealed that when he reached his final event in tiny Tama, Iowa (population 2,800), only a single person had chosen to come.

“We decided to plow through — quite literally some times,” O’Malley told MSNBC’s Nicolle Wallace on “Morning Joe.” “The very last event of the night we actually had a whopping total of one person show up, but by God, he was glad to see me.”

That one person was a man named Kenneth, who braved the fury of winter because he hasn’t chosen which Democrat to back and wanted to hear O’Malley’s pitch.

While the incident may seem a little embarrassing, O’Malley’s campaign has worked hard to spin it as a positive, “only-in-Iowa” incident that showcases the candidate’s commitment. The campaign sent the media a reporter’s Tumblr write-up of O’Malley’s event, highlighting excerpts they believe show O’Malley positively.

“O’Malley was in his element: practicing retail politics and having a one-on-one conversation with an Iowa caucus-goer, about everything from the Syrian refugee crisis to reducing incarceration rates, both topics that sparked Kenneth’s interest,” blogger Sarah Beckman wrote in one highlighted excerpt.

In his element or not, O’Malley couldn’t win over Kenneth, not right away anyway. Afterwards, Kenneth was still unsure how he’d vote.

But though Kenneth wasn’t ready to give O’Malley his vote, he encouraged the candidate by saying he suspected polls showing him 45 points behind could be wrong.

“And I’m ahead of him now!”O’Malley said in reply.

It’s not clear that’s the case, though. Before a surprising Iowa result vaulted Carter to the front of the pack, he was still polling at 4 percent nationally. O’Malley, on the other hand, most recently polled at 3 percent support, in a field far less fractured than the one Carter competed against.

O’Malley: Only Humans Suffer from Unemployment