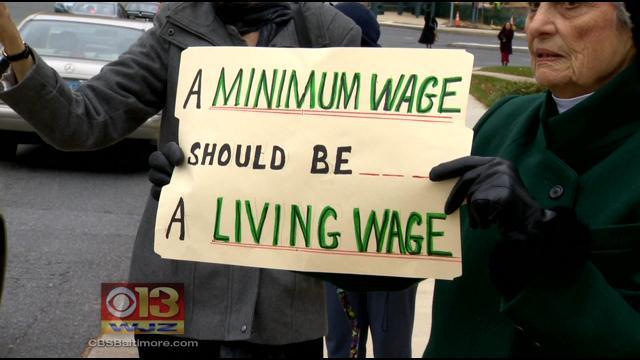 Baltimore is the latest major American city to vote on raising its minimum wage to $15 an hour.

The city council passed the measure Monday evening, voting 11 to three to raise the city’s minimum wage to $15 an hour by the year 2022.

The minimum wage across Maryland was set to increase to $10.10 by 2018, but members of the city council have been pushing for a $15 increase for months.

“It means some justice for the working people who have worked so hard to build this city and can’t earn enough at their jobs to make ends meet,” Clarke said.

The council’s vote sends the issue to Mayor Catherine Pugh, who has not indicated whether or not she plans to sign the measure.

“Mayor Pugh will make her decision based on what she believes is in the best interests of Baltimore residents, not what is the most popular decision or most expedient,” the mayor’s spokesman Anthony McCarthy said.

The mayor’s office has remained consistent that a desire to raise minimum wages must be balanced with financial consequences. Baltimore’s public schools alone face a $130 million deficit, according to the Baltimore Sun.

Seattle, Wash., raised its minimum wage to $15 in 2014, followed by San Francisco and Los Angeles. Democratic New York Gov. Andrew Cuomo signed into law a new $15 minimum wage for his state in 2016, and the University of California proposed to pay its low-wage employees $15.

Activists and union leaders who are a part of the Fight for $15 movement have anticipated an uphill battle under the Trump administration, but the groups are looking to take advantage of what they perceive as an uptick in activism.