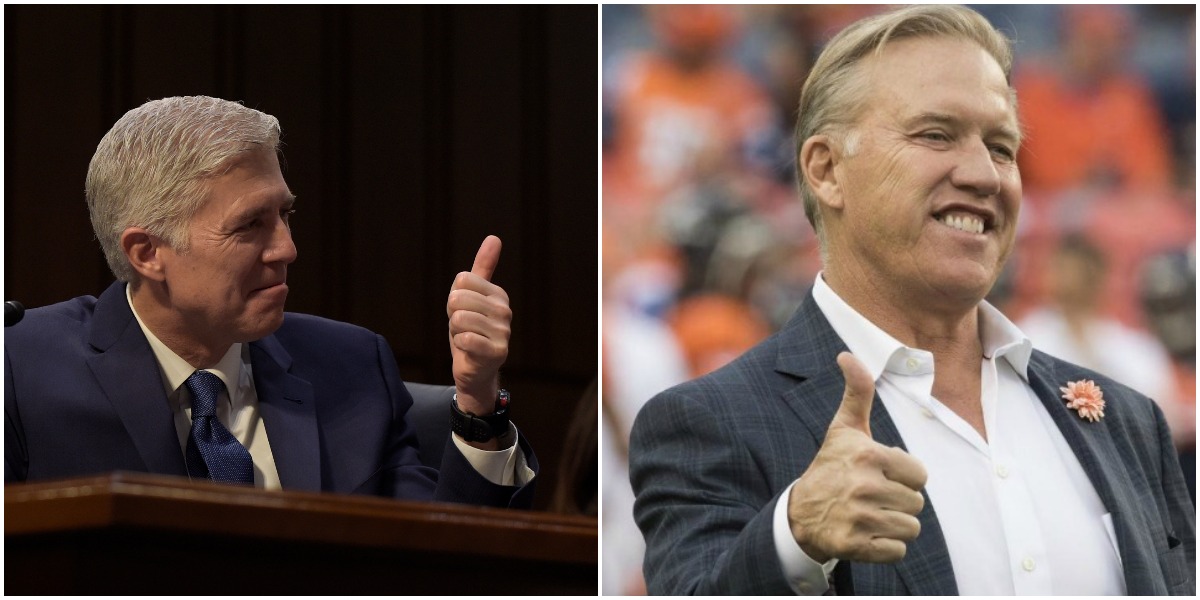 The Colorado Springs Gazette tweeted a copy of the letter in which Elway state, “”Neil is a big Denver Broncos fan, and I can tell you I’m a big fan of his.”

The letter, combined with the use of the teams logo, unleashed a storm of tweets which were full of snark, passive aggression, and disdain for the NFL legend.

Well, I was on the fence, but John Elway endorses him? Surely he's qualified to be on the Supreme Court. https://t.co/DxWtmqckcY

No way, I'll never confirm Gor … Wait, what? @johnelway says I should?! Consider it done ✅.

With all due respect, stay in your lane and just worry about football. You obviously don't respect or care abt women and POC. @johnelway https://t.co/wDuPAJoJDP

Huh, didn't know Elway was such an open bigot and opponent of worker's rights.

As a Democrat and a Cleveland Browns fan, this is yet another reason for me to hate John Elway. #TheDrive #TheFumble #TheTheft

Jocks should stick to sports. Only CTE sufferers would endorse Gorsuch. #FascismForeverClub

of course he supports a nazi

There were a few people who came to Elway’s blind side.

Wow. I may actually have to start rooting for the Broncos.

@BradfatherSpeak elway is a smart man

In his statement,  Elway emphasizes that Gorsuch is seen as a Western voice, as it relates to gun rights and public lands issues on a court dominated by Eastern judges and currently split between so-called liberals and conservatives, reports SportingNews.

SportingNews reported that the Bronco’s organization did make an official statement on the matter explaining that Elway’s comments were “independent of the team.”

Not Broncos letterhead. Was written on John's personal letterhead (see left margin) & his endorsement is independent of the Denver Broncos. https://t.co/9DYZS0Aarq

US Limits Carry-on Electronics for Travelers From 8 Muslim Countries