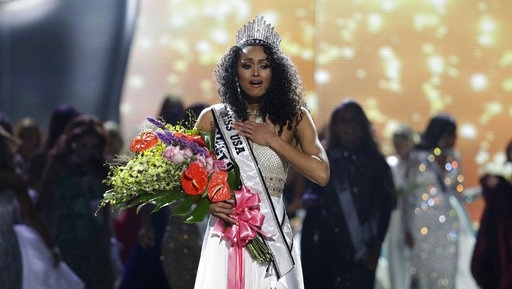 A 25-year-old scientist from the District of Columbia who works for the US Nuclear Regulatory Commission was crowned Miss USA Sunday — and she did it after making some controversial comments about political issues during the competition, reports the New York Post (NYP).

Kara McCullough, who fits into the rightfully beloved STEM world, is creating a whirlpool of emotional outcries following conservative answers to questions she gave enroute to her crowning as Miss USA 2017.

See, McCullough explained that she doesn’t consider herself a “feminist” and that people do not have a “right” to health care.

“I’m definitely going to say it’s a privilege,” McCullough said, when asked if access to medical care was a right, as liberals such as Sen. Bernie Sanders say, or a privilege, as many conservatives say, reported the NYP.

She then added: “As a government employee, I’m granted health care and I see firsthand that for one to have health care, you need to have jobs.”

Later in the competition, when the question of “feminism” was proposed to the contestants, McCullough responded that she likes to “transpose” the word feminism to “equalism,” according to NYP.

“I don’t want to call myself a feminist,” McCullough said. “Women, we are just as equal as men, especially in the workplace.”

McCullough, who graduated with a chemistry degree from South Carolina State University, said after the contest: “I believe we’ve come a long way and there is more work to be done. I think domestically we are making progress and I do believe that we will become equal one day,” said NYP.

Following her statements, many liberals took to Twitter to criticize the contestant from the District of Colombia, utilizing the hashtag “#MissUSA”

#MissUSA Miss DC just lost me with that answer….Affordable healthcare is a privilege? Girl bye. pic.twitter.com/Q5mU7PIlx1

DC just disqualified herself with that answer #MissUSA

Do not take your political advice from this #MissUSA. Healthcare is a right, not a privilege. https://t.co/O7nnQw8IqV

#MissUSA Ms. District of Columbia is CANCELED‼️ saying health care is a privilege and not a right‼️

In response however, many did stand in unity with McCullough:

> Isn't a feminist and has conservative views

A black scientist (chemist) who wants to inspire children to pursue STEM careers is now #MissUSA.

This is what happens when smart women major in radiochemistry instead of feminist studies. They actually learn! #congrats #missusa https://t.co/uY4RfOvoV1

No, #MissUSA didn't misunderstand the question. Healthcare is a privilege not a right. Perhaps y'all misunderstood the Constitution

McCullough will now move on to represent the United States at the Miss Universe pageant.

“I’m extremely thankful for this opportunity,” she said after the event, which was held at the Mandalay Bay Convention Center on the Las Vegas Strip, reports NYP.

“I just want to encourage so many women nationwide to find their passion in any subject possible and understand that nothing is difficult if you really, truly put the work in for it.”

Obama Admits His ‘Red Line’ In Syria ‘Was An Imperfect Solution’