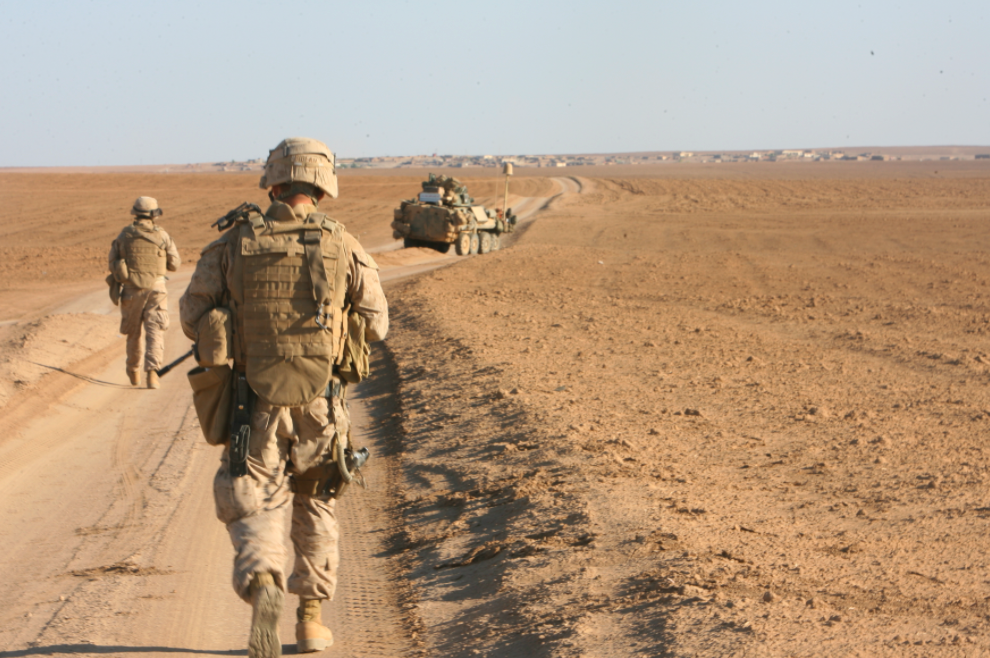 I’ve written versions of this essay for − literally − decades.  Predating the War in Afghanistan, the entirely notional War Against Terrorism, and 9-11.  War is a problematic thing.  There are a zillion ways to fight wars stupidly and ineffectively, only a few ways to fight them properly.  US foreign policy has embarked on a Master Plan, transcending party, to fight wars stupidly and ineffectively.  We’ve been doing this for decades, hence my essays.

Stupid, ineffective wars should not be the calling card of the world’s and history’s most potent military force, but alas it is.  At this writing of the same old essay, we’ve been notably militarily involved in:

I’ve deliberately excluded the dozen or so myriad smaller on-going military engagements that almost no one knows about.  We don’t need to wrap ourselves around the axle of what constitutes a real military engagement.  We have quite enough to discuss without the side-show.

Quibbledicks will note I’ve assigned Iraq to Barry Hussein when they believe it should belong to Dubya.  Dubya did indeed have an Iraq of his own as did Daddy H-Dub, but I will remind everyone that Barry Hussein notoriously extricated us from Dubya’s Iraq, and then almost immediately reinserted US military might into the power vacuum that had been filled by ISIS … the inevitable and predictable consequence of our evacuation in the first place.

…at least I predicted it, back in ‘04/’05.  But power vacuums are not necessarily a bad thing; it keeps an enemy fighting among itself.

The one aspect of this that is most incredible to casual observers − and everyone who does not comprehend military doctrine is a casual observer − and virtually all libertarians fail to comprehend military doctrine − is the staggering length of these military engagements.  How can the children of our first-deployed troops to Afghanistan be nearing the age where they can, themselves, be deployed to Afghanistan?  Aren’t we the world’s most potent military power?  Is this still our daddy’s war?

As one of the few libertarians who actually understand military doctrine, I have to admit that these are good questions.

The answer, of course, as I said above, is that we are fighting wars, as a nation, very very stupidly, abandoning all semblance of comprehension of military doctrine.

Military doctrine is the collected wisdom, the best-practices, of ten thousand years of human civilization’s experience in fighting among itself.  Some things help you fight better, others don’t.  A war that lasts for sixteen years, in this day and age, is being fought by someone very poorly.  That someone, with regard to the interminable presence in Afghanistan, is the United States and its NATO enablers.

The US and Europe are full of Generals who’ve studied the military tactics of European and American Generals.  They are very adept at European-style, set-piece warfare, where units are discreet, and can be represented − chess board style − with markers on a terrain grid or a grease pen on a glass panel, and tallied in a spreadsheet.  Such wars are won by overwhelming force shattering enemy units, rendering their unit effectiveness to zero.  When enough units are rendered ineffective and cannot be replaced by new units, the sovereign government employing those shattered units becomes politically defenseless and it loses the war.  This is the Order of Battle preferred by those who fight wars by spreadsheet.  It is also preferred by those who design wars for computer games.

The only problem with this, though, is that neither Afghanistan, nor its spreading cohort of War Against Terrorism cousins, is a European-style, set-piece war.  US Generals need to put away the spreadsheets, drop the grease pens, and put the chess pieces on the shelf.  They need to read the next chapters of Sun Tzu and Clausewitz and learn to see beyond the next tactical military objective.  Traditional military objectives are beyond worthless.

Unit effectiveness is irrelevant in this enemy.  Shattering the unit is pointless.  There is no sovereign state behind it that cares about adequate defenses of its perimeter; it has no perimeter.  The world is its perimeter.  We cannot outflank the world.  We can only kick its ass.

A US/European-style war would require that we obliterate the population fueling the war in order to impose on it a political loss.  That population is, of course, islamism.  The relevant fact about islamism is that it encompasses the entire muslim religion.  I don’t want to hear that “only a few muslims are true islamists”.  While superficially true, it is wholly irrelevant.  People who spout that nonsense are willfully ignorant, determinedly suicidal, and willing to take the rest of us to a premature grave for their ignorant idealism.  They are as self-deceptive in their own right as our Generals are.

“Yabbut… yabbut… we didn’t tolerate dissent during, say, World War Two!!  It’s the same thing!!”  False.  We fight European-style, set-piece wars, which are not the same thing.  If you want to figure out why our wars are being fought stupidly by our Generals with misplaced preconceived notions about the enemy they’re fighting then you, as critics of those wars, have to drop your preconceived notions about that enemy as well.

The undeniable fact of the matter is that European-style, set-piece warfare does not, and will not, work against a determined non-European-style enemy because they refuse to acknowledge political defeat as a necessary consequence of military defeat.  That answer isn’t going to change until the enemy changes.  The enemy isn’t going to change any time soon.  Sixteen years of Afghan war is all the proof anyone should need.  Get used to it.

Overwhelming battlefield force for the purpose of imposing political acknowledgement of military defeat will. Not. Work.  Yet that is the battle plan embarked upon in 2001, renewed a few years later, renewed once again by Barry Hussein, and renewed yet again last week by Donnie Combover.  The general consensus of US and NATO Generals, highly adept at European-style warfare, pointed us in this direction.  If only we can take one more hill and deny the enemy another piece of tactically advantageous terrain they’ll realize the futility of their plight and stop fighting …

This enemy does not care about dead or crippled soldiers − not even their own.  This enemy does not care about territorial gains or losses.  This enemy fights for the sake of fighting.  It is, to them, a holy war.  If only there were a word for it, … like jihad or something.  Even then it would be useless when trying to explain to westerners saturated in the European-style, set-piece warfare model; even critics of this paradigm believe military defeat imposes necessary political consequences, and they will not abandon this belief even as it fails to happen.

There are valid reasons for embarking on war against those who have declared us their enemy and are actively attacking us.  But when they don’t fight wars the way we do, the only way to defeat them is to fight wars the way they do.  We should be smart enough to adapt, yet we absolutely refuse to do so.  We do not need to mirror the underlying ideology and adopt a similar self-righteous theo-fascism, but we need to stop playing our weaknesses into their strengths.

Our weakness is the belief that a militarily defeated enemy is also politically defeated.  Sixteen years of Afghanistan, eight or nine years of Dubya’s version of Iraq, and hell, even the entire Vietnam war are proof to the contrary.  Every single one of these is a string of almost exclusive military victories for The Good Guys® [yes, even Tet] − and look what became of the politics.

When we militarily defeat an enemy we assume their acknowledgement of consequential political defeat, and our impulse is to stick around, help them up, wipe off the blood and dust, repair their schools, hospitals, roads and churches, and show ourselves to be gracious in victory.  This is what we did for nazi Germany and imperial Japan.  Yet when we try these things on an enemy which does not concede political defeat, we do little more than paint targets on our own backs and we wonder why our previous enemy does not understand that the war is over.

The answer is trivially simple: the war is not over.  We did not attain the political victory that we believe we got; we simply racked up a series of likely lopsided military wins.

Our strength is military force.  We are very capable of rapidly moving in, kicking an enemy’s ass, leaving him with dead bodies and broken infrastructure.  If we are to engage the enemy we insist on engaging because they insist on engaging us, and do so effectively, we must use our strength and abandon our weakness.

If we are to embark on a generalized War Against Terrorism, then the long-term strategy must be to take military action to our enemy, overwhelm that enemy on his field, and immediately leave and come home.  Overwhelming military victory takes about six months, give or take.  Leave the dead bodies where they are.  Leave the destroyed schools and hospitals in broken chunks.  That’s now their problem.

If they persist in continuing hostilities, take another six months to go kick their ass again.  A series of six month wars spaced several years apart will be far less costly than a single war decades long against an enemy which does not play our game.

The alternative is to allow them to use our weakness against us in the form of perpetually dodging IEDs, trillions of dollars in ongoing and recurring cost of re-establishing foreign infrastructure − that they are more than willing to destroy out from under themselves, and multiple generations of our soldiers lost to the same military adventure.  This is what we’ve been doing, and it doesn’t work.

The other alternative is to permit them to make our field the terrain for their war.  This is what Europe is beginning to allow.

I’ve said it multiple times in multiple ways over the past decades: if you’re going to play war, do it properly.  Properly is what works; properly is not what is palatable enough for your conscience to live with.  Conscience is irrelevant in war.

If you are unwilling to play war and play it properly, for any reason, including having a conscience that you cannot avoid, then stay completely out of it.  But if the enemy thinks you are his enemy regardless − as this enemy has said countless times and repeatedly shown himself willing to act upon, even before “we turned them all into terrorists” − then be prepared to lose your life, nation and liberty.  You can keep the cold comfort of a conscience in the grave.

America is not a Free Country

Kasich Considering Teaming Up With Democrat For 2020 Run