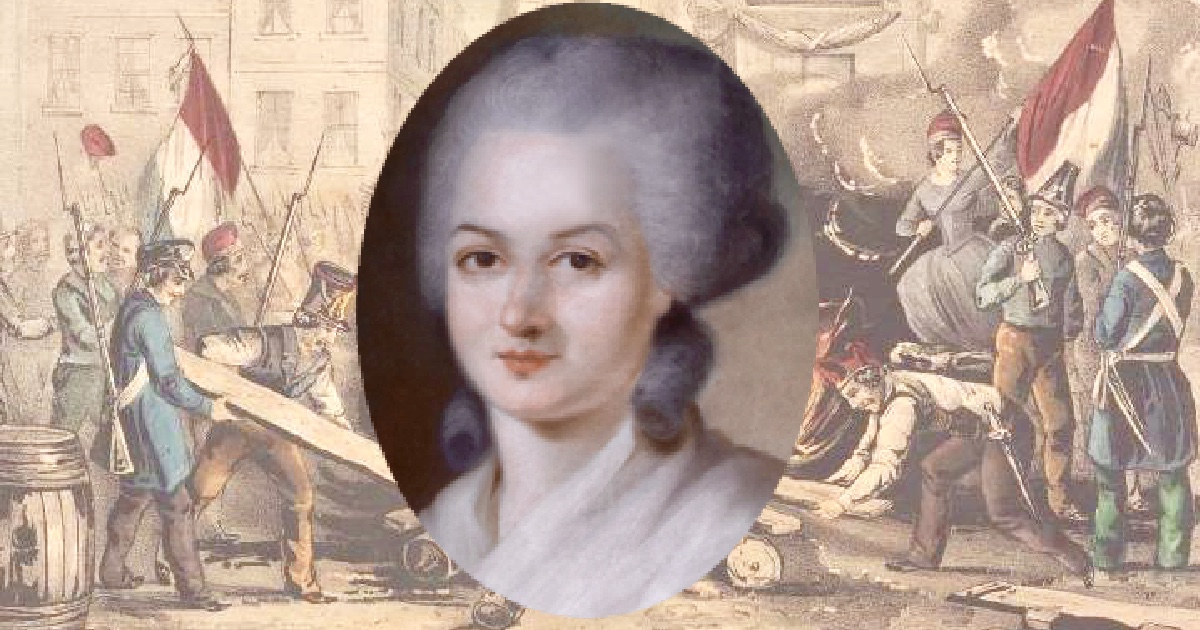 Despite the tendency of French historians to depict the events of 1789-1799 in a more favorable light than they deserve, heroes of the ghastly French Revolution are few in number.

Hundreds of thousands of people perished in a decade-long spasm of violence, tyranny, hyperinflation, and war—with precious little to show for it. Britain’s Glorious Revolution of 1688 accomplished far more lasting good than the French mayhem of the 1790s.

The French Revolution Was Anti-Woman

The French Revolution produced no admirable generation of “Founders” as in America. Many of the noble ideals of its Declaration of the Rights of Man and of the Citizen, issued within a month of the storming of the Bastille in July 1789, were largely trashed by the radicals who commandeered events and imposed the dreaded Reign of Terror. It all ended in a coup masterminded in 1799 by Napoleon Bonaparte, who crowned himself emperor five years later. When he was exiled after Waterloo in 1815, the Bourbons were restored to the French throne.

As I wrote here, Edmund Burke was spot-on when he lambasted the Revolution. He saw it as the deadly fruit of fuzzy-headed intellectuals deploying power to impose their academic abstractions. “What is the use of discussing a man’s abstract right to food or to medicine?” he asked. “The question is upon the method of procuring and administering them. In this deliberation I shall always advise to call in the aid of the farmer and the physician, rather than the professor.”

Clark writes that “the Revolution was one long campaign to enforce male supremacy.”

What about women? Didn’t they win some long-sought freedom from oppression in the male-dominated society of the ancien regime? Not much. In his splendid book, The French Revolution and What Went Wrong, historian Steven Clarke says these minor advances for the female gender are the extent of it: daughters were enabled to inherit as much as their brothers, divorce was allowed, women over 21 could finally marry whom they wanted without parental consent, and females were given permission to sign legal documents as witnesses.

“But apart from those concessions,” writes Clarke, “the Revolution was one long campaign to enforce male supremacy.” Indeed, every single one of many female political societies was dissolved by law in 1793. Two years later, women were banned from attending any political meetings, and female gatherings of more than five for any purpose were declared illegal.

“Get back to your chores!” was the unmistakable message.

A Heroine with Integrity and Honor

The Revolution produced at least one hero, however, and it was a woman.

History buffs might be thinking, “He must be referring to Charlotte Corday!” She was the woman known for one decisive act and almost nothing more—the stabbing of a bloodthirsty, lunatic, fake news journalist, Jean-Paul Marat, in his bathtub. Corday said she “killed one man to save 100,000.”

Though it’s tempting, my choice for the greatest hero of the Revolution is not Corday. It’s Olympe de Gouges. She possessed more integrity and honor than any of the big-name male rabble-rousers of her day.

(For an excellent account of the French Revolution and its savage turn, see my FEE colleague Dan Sanchez’s article, “How Nationalism and Socialism Arose from the French Revolution.” In a recent conversation, I asked Dan if he could name a real hero of the period. He suggested perhaps the Marquis de Lafayette, of American Revolution fame, might be considered such. I agree that Lafayette was a voice of reason in a sea of ridiculous fanaticism, but he spent most of the Revolution in exile or as a prisoner of the Austrians. He would be my second choice after Gouges.)

Born in 1748, Gouges earned a national reputation as an accomplished playwright and an outspoken opponent of the slave trade before her 30th birthday. She was among the earliest defenders of the rights of women, demanding the same as those for men. Growing up in a society in which women hadn’t yet graduated to the status of second-class citizens, she knew what she was talking about.

Forced to marry when she was 16, she later said this of the “beau” selected for her:

I was married to a man I did not love and who was neither rich nor well-born. I was sacrificed for no reason that could make up for the repugnance I felt for this man.

Mr. Gouges died within a year under unusual circumstances. We’ll have to leave it at that for now. She never remarried.

Death threats resulted from one of her earliest plays, The Lucky Shipwreck, about the terrors of slavery and the slave trade. She narrowly escaped being locked up in the Bastille, but the powers-that-be settled on simply banning the play. Her work inspired riots in Paris and across the Atlantic in the Caribbean.

In one of her anti-slavery plays of 1788, a Gouges character prophetically declares:

The power of one Master alone is in the hands of a thousand Tyrants who trample the People under foot. The People will one day burst their chains and will claim all its rights under Natural law. It will teach the Tyrants just what a people united by long oppression and enlightened by sound philosophy can do.

Gouge was very much a revolutionary, but not the bloodthirsty, vengeance-seeking, power-hungry type that would take over in 1793. She earned great fame in her day for declaring, “Women, isn’t it high time that we too held a revolution?”

Clarke depicts her as “fairly moderate in her politics,” noting that she endorsed a constitutional monarchy on the order of Great Britain’s, with drastically reduced powers for the king. She even spoke up against the trial and execution of Louis XVI in 1792-93, preferring exile to regicide. In addition to asserting that women were entitled to the same rights as men, her message was humane, anti-violence, and supportive of ending special privileges granted by the state.

Her Fight for Equal Rights for Women

Gouge despised both customs and laws that advantaged some at the expense of others because she believed every individual was entitled to the upward mobility their character, abilities, and ambitions would naturally give them if unobstructed. Clarke writes:

In 1791 Gouges penned her most famous text, the Declaration of the Rights of Women and the Citizen, a reaction to the male-only declaration at the heart of the new Constitution. Her text opens with the forceful line, “Man, are you capable of being just?” and goes on, “Tell me, who gave you the sovereign right to oppress my sex?”

Two years into it, the Revolution ostensibly devoted to “Liberty, Equality, and Fraternity” needed a mid-course correction. Gouges was determined to do what she could to see it live up to its ideals.

Her Declaration followed almost verbatim the original one enshrined in the short-lived Constitution of 1791, but she essentially feminized it. Wherever men alone were emphasized, she included women.

To the radicals like Jean-Paul Marat, Georges Danton, and Maximilien Robespierre, this was more than a little annoying. This upstart woman was daring to challenge the direction they were charting for the Revolution. Amid their calls for ever more violence, Gouges was shouting, “Blood, even that of the guilty, if shed cruelly and profusely, sullies revolutions forever.”

She publicly denounced Marat as “an abortion of humanity” and Robespierre as “loathsome, a disgrace to the Revolution.” They were dragging the country, she rightly claimed, down the path to a new form of dictatorship and senseless war against the rest of Europe.

Imprisoned for three months with no access to legal counsel, she was subsequently tried for treason on November 2, 1793, and guillotined the next day. That earned her the status in history as the second woman in revolutionary France, after Marie Antoinette, to lose her head to a basket.

Biographer Sophie Mousset, in Women’s Rights and the French Revolution, quotes an anonymous Parisian witness to the execution of Gouges:

[She] had thrown herself in the Revolution, body and soul. But having quickly perceived how atrocious the system adopted by the Jacobins was, she chose to retrace her steps. She attempted to unmask the villains through the literary productions which she had printed and put up. They never forgave her, and she paid for her carelessness with her head.

What that observer saw as “carelessness” would be far more aptly described as courage. This was a woman who gave her life for what she thought to be right, for things like equal rights, individual liberty, and limited government. She faced death with as much steely fortitude as any man.

Once again from Steven Clarke’s book comes this passage. It cites one of the more fanatic revolutionaries who, shortly after Gouges was killed, wanted to be sure that women got the message:

Pierre Gaspard Chaumette, the public prosecutor for Paris, wrote a lecture to women saying that: “The man-woman, the impudent Olympe de Gouges, the first to set up women’s societies, abandoned the care of her household to go into politics, and committed crimes [by which he meant, speaking her mind and criticizing the Revolution’s worst leaders].”

Talking of the women who were demanding equal rights, he went on: “All these immoral beings have been eliminated by the avenging blade of the law, and you want to imitate them? No, you will only be worthy of esteem if you force yourselves to be what Nature intended.”

Can you imagine Chaumette today getting through a guest appearance on The View? He would surely be guillotined, verbally at the least.

Three cheers to Olympe de Gouges. She was ahead of her time, a hero in a time and place that produced so few.

Lawrence W. Reed is President Emeritus and Humphreys Family Senior Fellow at the Foundation for Economic Education and author of Real Heroes: Incredible True Stories of Courage, Character, and Conviction and Excuse Me, Professor: Challenging the Myths of Progressivism. Follow on Twitter and Like on Facebook.

Is Meryl Streep Right in Saying That Women Can Be Pretty Toxic?