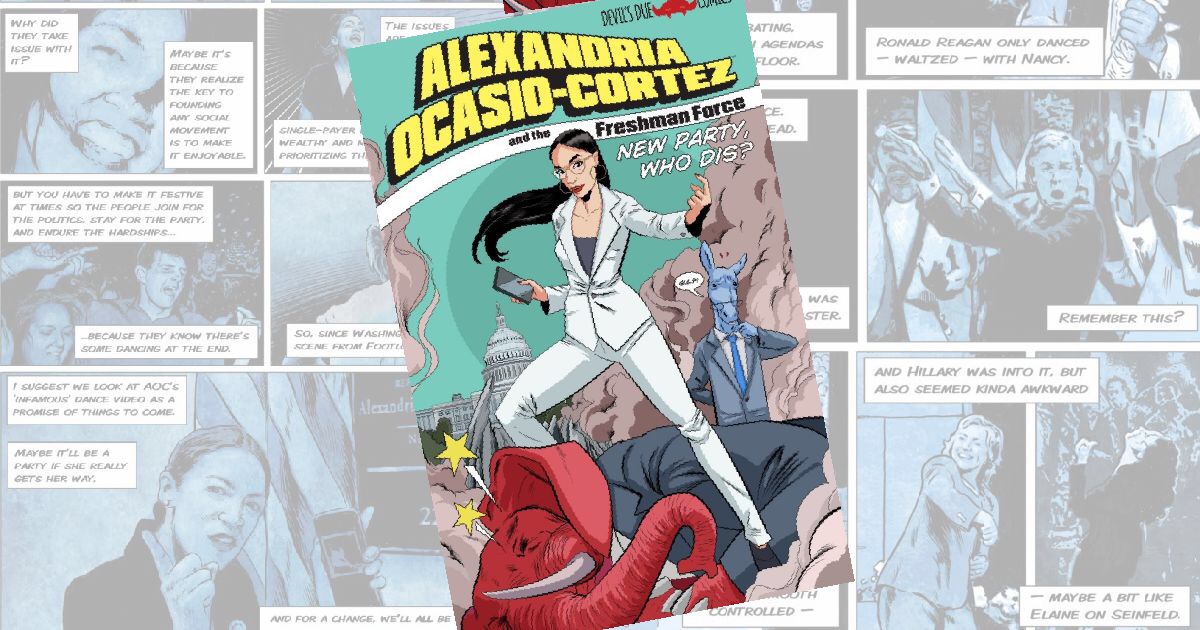 It looks like the Green Doofus is about to save the fictional world of comic books from the impending doom of “climate change” with her powers of government bans to stop cow farts.

This is not a joke; the Freshman Democratic Congresswoman is about to get her very own star role as a superheroine in a new satirical comic book entitled Alexandria Ocasio-Cortez and the Freshman Force: New Party, Who Dis?”

The 29-year-old former bartender turned Democratic Representative from New York, who defeated the district’s longtime Congressman, Rep. Joe Crowley, is featured in a promotional picture for the comic wearing a white pantsuit and holding a cell phone while she stands triumphantly over a downed large red elephant.

There has also been another image released in which Ocasio-Cortez is wearing a Wonder Woman type outfit holding a sword as she stands over a giant red elephant with her foot on its neck and the U.S. Capitol Building in the background.

The Comic will be published by a small Chicago-based publisher called “Devil’s Due.” The comic is set for release on May 15th,

“It’s Alexandria-Ocasio-Cortez and the ‘Freshman Force’ of Congress vs. the establishment in this all-new commemorative comic,” the website for the new comic book says. “Comic creators converge to celebrate the election of the most diverse group of freshman congresspersons in history, and spare no-one in this satire that takes aim at Washington.”

“There’s just something about Alexandria that resonates with so many people,” the book’s creator, Josh Blaylock, told CNN, adding that the comic book will be “a collection of stories that all embrace the theme that we’re excited about all of the energy and positive change this new crop of congresspersons is going to bring.”

Among the creators who will bring this project to life are the well-respected artists and writers such as Jill Thompson, Robert Sikoryak and Tim Seeley.

“Some of the stories are really sweet; some are completely absurd and satirical; some are cathartic and venting,” Blaylock told the news outlet.

President Barack Obama has also been featured in comics by Devil’s Due, which turned him into “Barack the Barbarian.”

Ocasio-Cortez is apparently a comics fan.

FACT CHECK: Did The National Debt Double Under Obama?