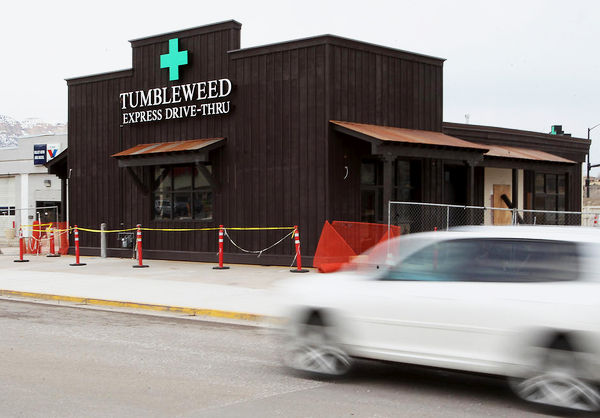 The first business in the nation to offer legal marijuana at a drive-thru window is opening Thursday in Colorado on the unofficial cannabis holiday 4/20.

The business, called Tumbleweed Express, turned a rundown building previously used for car washes into a drive-thru marijuana store in Parachute, a town in western Colorado. Officials in Parachute originally granted a license to the business in February. The store had planned to open in March but later pushed the grand opening to coincide with April 20, the annual marijuana holiday celebrated by smokers, reports CBS San Francisco.

The drive-thru will serve customers between 4 p.m. and midnight Thursday through Monday. Tumbleweed Express, owned by Green Cross Colorado LLC, will need to follow strict rules governing the substance, including barring anyone under 21-years-old from the premises even if they are in the backseat of a car.

“I didn’t set out thinking this would be national news,” Mark Smith, the company’s CEO, told CBS San Francisco. “I didn’t have some big epiphany. I just saw a need for our customers.”

The Tumbleweed Express is an offshoot of Smith’s Tumbleweed stores, which first opened in February. State law mandates the sale of marijuana be done indoors, so the drive-thru is built in a way where cars can enter the building.

Marijuana is a contentious issue in that area of the state, but the local economy strongly depends on revenue from legal sales. Parachute previously banned marijuana businesses in their community despite the liberal outlook on weed in the state. The marijuana industry in Colorado sold a record amount of weed in 2016, eclipsing $1 billion in sales for the first time. Officials repealed the ban in June 2015 to the ire of some, but marijuana sales are now a key part of the local economy.

“The really good news is that other businesses are benefiting from it,” Parachute Town Manager Stuart McArthur told Post Independent. “We think the drive-through is a very creative and innovative idea.”

France Claims It Has Proof Assad Was Behind Chemical Weapons Attack

Sessions Blasted By State Gov. Over Attempt To Interfere With Medical Marijuana