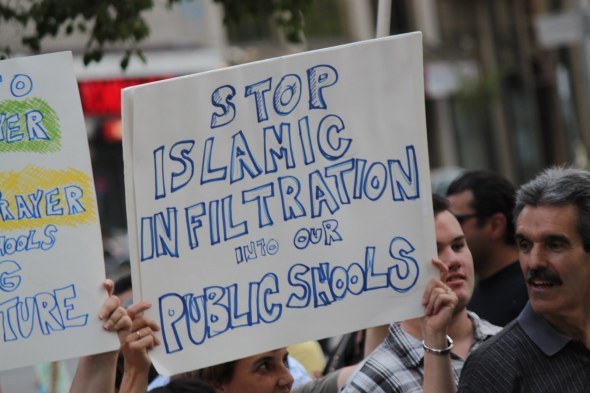 “Muslims showed tolerance by…,” asks a fill-in-the-blank style question on a 7th grade world history test at Olmsted Falls Middle School in Ohio, according to a picture provided to The Daily Caller News Foundation by an anonymous source.

The choices are “a. accepting other people’s religious beliefs,” “b. converting others to Islam,” “c. allowing only Christians to practice their religion,” and “d. conquering the Berbers.”

The answer is “a. accepting other people’s religious beliefs.”

The answer does not account for the fact that Muslims taxed Christians and Jews to maintain their religion — forced conversion and death were the only alternatives. This is dictated in the Qur’an, as reported by Forbes: “Fight those who do not believe in Allah or in the Last Day and who do not consider unlawful what Allah and His Messenger have made unlawful and who do not adopt the religion of truth from those who were given the Scripture – [fight] until they give the Jizyah willingly while they are humbled.”

Olmsted Falls previously showed 7th graders “30 Days: Muslim and America,” a film that portrays a man performing Muslim rituals and characterizes Muslims as victims and people of other religions as bigoted oppressors, as reported by Thomas More Law Center.

The video instructs students to speak up if they hear Islam defamed. The class did not show students any videos demonstrating how they can conduct traditions from other religions.

The school stopped showing the video after the Thomas More Law Center threatened a lawsuit.

The Daily Caller News Foundation reached out to Olmsted Falls for comment on the question. Dr. Jim Lloyd, superintendent of Olmsted Falls City Schools, replied that the district had no comment.

Ossoff Only Earned 1.3 Percent More Than Clinton In Georgia’s 6th