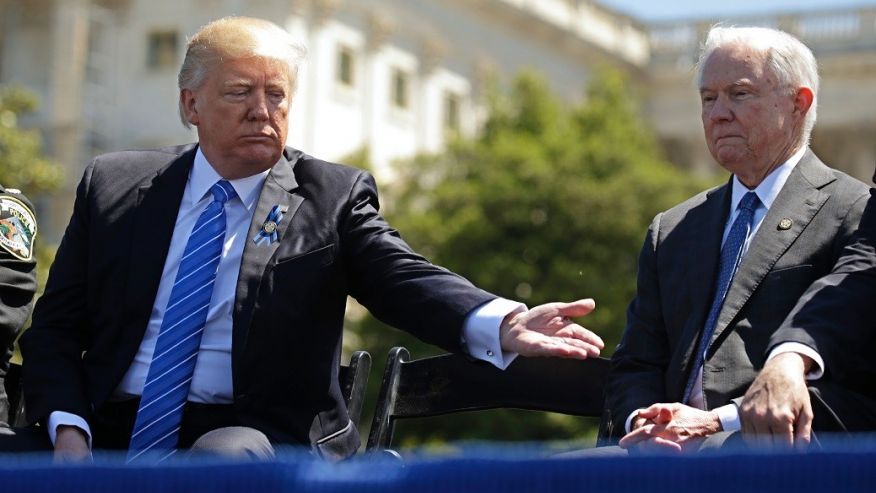 Trump hit Sessions hard in an interview last week with The New York Times saying he would not have appointed Sessions Attorney General if he knew Sessions would recuse himself from the Russian meddling investigation. On Monday Trump called Sessions “beleaguered” in a tweet. Tuesday, Trump tweeted that Sessions took a “very weak position” in pursuing Hillary Clinton’s private server and emails.

After making known his own frustrations with Sessions recusal in the Russian investigation on his radio show Monday, Rush Limbaugh described Trump calling Sessions “beleaguered” as “a little bit discomforting” and “unseemly for Trump to go after such a loyal supporter this way.”

Jeff Sessions was the first Senator to endorse Donald Trump in the 2016 campaign. His chairmanship of the Senate sub-committee on immigration had the effect of legitimizing Trump’s promise to “build a wall” and end illegal immigration. Trump described the endorsement as bringing him into the “mainstream.”

Tucker Carlson called the attacks on Sessions “self-destructive” saying it’s a “worrisome sign the president may be forgetting who is on his side.” “Lay off Sessions. He’s your friend” advised Carlson.

On his radio show Monday, Levin expressed concern that the “president and his staff will make a terrible mistake in pushing Jess Sessions out the door.” On Facebook, Levin reminded the President that it was “YOU” that said the administration would not pursue charges against Hillary Clinton.

Shortly after the election, Donald Trump told The New York Times he was no longer interested in prosecuting Hillary Clinton for her use of a private email server. “I don’t want to hurt the Clintons, I really don’t. She went through a lot and suffered greatly in many different ways, and I am not looking to hurt them at all. The campaign was vicious” said Trump.

Breitbart‘s Adam Shaw hammered Trump, saying his tweet on Sessions “weak” position in pursuing Clinton only serves to “highlight” Trump’s “hypocrisy on the issue.” Shaw’s article recognizes Sessions as one of the “vital pillars” of dispensing Trump’s immigration agenda, and his attacks could undermine Sessions ability to implement it.

Mark Krikorian, executive director of the Center for Immigration Studies (CIS), one of the leading think tanks supporting Donald Trump’s immigration agenda said “If an early supporter like this is thrown under the bus, then who is safe? You can imagine what the other cabinet secretaries are thinking” reports The New York Times.

“The story Trump is telling himself is convenient for creating a scapegoat, but it’s also largely untrue” wrote The National Reviews editors. “That the president is taking out his pique on Sessions shows just how cheaply he holds loyalty.”

National Review’s Andrew McCarthy called Trump’s “rant” against Jess Sessions an “interesting bit of revisionist history.” McCarthy acknowledges that Trump has a point in saying Sessions should not have recused himself, but points the finger at Trump for hiring Deputy Attorney General Rod Rosenstein. “It is Rosenstein whose order appointing Robert Mueller fails to set limits on Mueller’s investigative jurisdiction, thereby authorizing the fishing expedition that has Trump so ballistic” writes McCarthy.

Prominent conservative Victor Davis Hanson wrote in National Review that Sessions is the “epitome of both” loyalty and competency, and “it’s past time to let Sessions do his job and move on.”

President Trump and his advisors are privately discussing the possibility of replacing Jeff Sessions, according to a report in the Washington Post. One person close to Trump told the Post that he asked how axing Sessions “would play in the conservative media.”

It doesn’t appear that it would play well.

Sessions and Trump are no longer speaking according to a report late Tuesday in Politico. A senior White House Official told Politico of Trump’s desire to fire Sessions “but doesn’t want the confrontation.” “[Trump] doesn’t mind the long negative storyline. He will torture him every single day.”

Sessions has sent word to the White House he has no intention of stepping down.