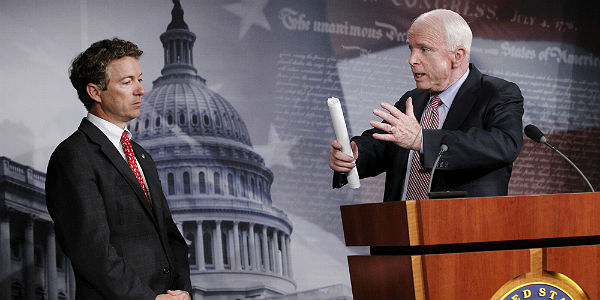 Although the National Defense Authorization Act was a key item on the agenda for McCain, Paul stepped in to block the bill by requesting two amendments be added to the legislation, namely one on prohibiting indefinite detention and one on the authorization of the use of military force to fight the Islamic State.

McCain’s frustration with Paul stems from his desire to pass the NDAA as soon as possible, mostly because he leaves to Arizona on Monday to begin cancer treatment, according to sources who spoke with CNN. As CNN noted, the fact that McCain is leaving Monday helps to explain why GOP Sen. Mitch McConnell would let the NDAA vote occur in the midst of a heated debated on health care reform.

“For 55 years in a row, Congress has passed the National Defense Authorization Act, which provides our men and women in uniform with the resources, capabilities, and pay and benefits that they need to perform their missions on behalf of the American people and keep our country safe,” McCain, chairman of the Senate Committee on Armed Services, said in a statement. “This legislation is more vital than ever.”

“The highest responsibility of every member of Congress is to do what they think is right for the nation. It is unfortunate that one senator chose to block consideration of a bill our nation needs right now, the National Defense Authorization Act,” McCain added. “We must uphold our solemn obligation to provide for the common defense and give our men and women in uniform the training, equipment, and resources they need to defend the nation. Our brave service members – many now serving in harm’s way – deserve nothing less.”

Sergio Gor, Paul’s communications director, told The Daily Caller News Foundation that Paul’s resistance to moving forward derives from his push for two amendments to be added to the major bill.

“Senator Rand Paul requested two bipartisan amendments, one on ending indefinite detention and one on AUMFs. He looks forward to working with leadership and the committee to get this done soon,” Gor said.

The Senate NDAA is now likely to be pushed back as far as September.