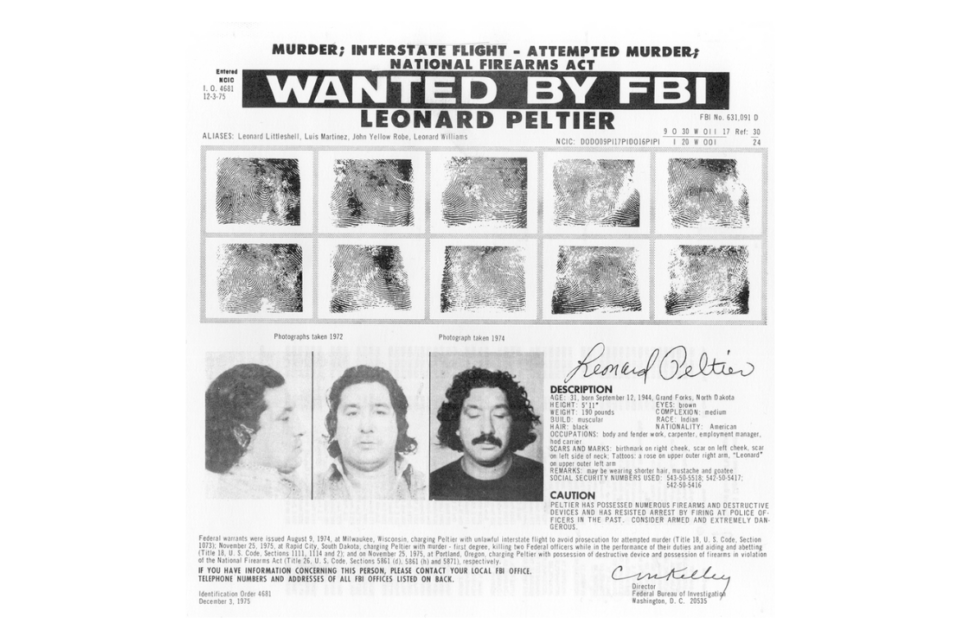 Criminal justice reform is an important topic for Libertarians. Not only do they want to change the laws to get rid of nonsensical and failed prohibitionist policies, such as the War on Drugs, but they also want to retroactively release anyone who’s been imprisoned for things they shouldn’t have been charged for in the first place.

This usually takes the form of a pardon list that’s fairly uniform across all Libertarian minds. Edward Snowden, Chelsea Manning, Ross Ulbricht, and Julian Assange are the usual suspects. But recently, Libertarian vice presidential nominee Spike Cohen called for the release of someone else: Leonard Peltier.

For those familiar with Peltier’s story, it shouldn’t be one bit surprising to hear a Libertarian call for his release, but the issue is that not too many are familiar with him. Peltier was a prominent Native American activist with the American Indian Movement (AIM). The first national director of AIM, Russell Means, came in second behind Ron Paul for the Libertarian presidential nomination in 1987. In 1977, Peltier was convicted of murdering two FBI agents.

The only issue? He didn’t actually do it.

The two FBI agents did indeed die, and it was during a shootout on the Pine Ridge Reservation in North Dakota, where Peltier primarily lived. The two agents were reportedly following a man named Jimmy Eagle onto the reservation, as Eagle was wanted for questioning in connection with a robbery. At some point in their tailing of Eagle, a shootout ensued that resulted in both agents being shot dead. As a result, the FBI arrested Peltier and two other AIM members, Rob Robideau and Darrelle Butler.

Are you confused, yet? It only gets worse.

For context, AIM at the time was very similar to the Black Lives Matter movement today. AIM was formed in Minneapolis, Minnesota in 1968 as a direct response to police brutality being perpetrated against Native Americans. They gradually expanded their scope to focus on broader issues of civil rights for Native Americans, and their frequent use of protests garnered the movement some staunch political opposition.

So when the FBI arrested three AIM leaders instead of the person they were allegedly there for in the first place, suspicions were raised. But the timeline leading up to it was even more suspicious. Robideau and Butler were arrested first, while Peltier fled to Canada, claiming he was being framed as a way to retaliate against AIM.

While Peltier hid in Canada, Robideau and Butler were tried in an Iowa federal court and ultimately found not guilty on the basis that they killed the FBI agents in self defense. At the same time, though, Peltier was extradited from Canada based on testimony from his girlfriend, Myrtle Poor Bear, that she had witnessed Peltier murder the two FBI agents. This was a surprise to everyone from Pine Ridge, given that nobody knew Peltier and Poor Bear had been dating.

This was because they weren’t dating. Days later, Poor Bear recanted her testimony and said that the FBI had coerced her into signing the affidavit they used to extradite Peltier. In Peltier’s ensuing trial, Poor Bear attempted to testify to that fact, but the judge ruled against it under the argument that she was not mentally competent.

Speaking of Peltier’s trial, it was a textbook example of a miscarriage of justice. Whereas Robideau and Butler had been tried and acquitted for the exact same thing in Iowa, Peltier’s trial was in South Dakota, with a completely different judge and jury. Evidence that had not been introduced in the previous trial was allowed in this one, and Peltier was not allowed to give his own self-defense testimony unlike Robideau and Butler.

Perhaps most central to the FBI’s argument against Peltier was testimony from a ballistics expert that tied the shell casings from the murder scene to Peltier’s own rifle. The expert explained that an actual ballistics test was not performed because the weapon was damaged, and this was enough to implicate Peltier in the murders. However, years later it was revealed that the test was indeed conducted and that it proved the shell casings did not come from Peltier’s rifle, which could very well have been the key to exonerating Peltier.

Instead, he was convicted and sentenced to two consecutive life sentences. Peltier’s application for parole was later denied in 1993, but the US Parole Commission stated that they “recognize[d] that the prosecution has conceded the lack of any direct evidence that [Peltier] personally participated in the executions of the two FBI agents.”

Yes, you read that right. The US Parole Commission more or less admitted there was no evidence to support Peltier’s conviction in the first place, and yet they denied him parole. As a result, Peltier sits in prison to this day. He’ll be eligible for parole again in 2024, at which point he’ll 80 years old – if he’s still alive at that point.

It’s likely that Peltier, whose prosecution can be described as nothing other than political, will die in prison for a crime that he not only didn’t commit, but that he has proven he didn’t commit. The events that led to his conviction were flawed and corrupt at every step, yet this man will die in prison. Thus is the nature of the criminal justice system in America.

It’s why Cohen ends his call for Peltier’s immediate release with this:

The facts of the case make it clear: Peltier never should have been imprisoned in the first place, and after spending the last 43 years behind bars for a crime he did not commit.

As Libertarians, we believe that, when power is concentrated into the hands of very few, it will lead to harmful, abusive, inequitable outcomes more often than not. The federal government’s treatment of the Natives, which continues to this day, and the FBI COINTELPRO program to destroy the lives of anyone who dares fight back against their aggression, are perfect examples of this.

For more information on Peltier’s case, read In the Spirit of Crazy Horse by Peter Matthiessen and watch the documentary Incident at Oglala, available on Amazon.

5 Useful Insights That The Best Instagram Tracker Can Provide