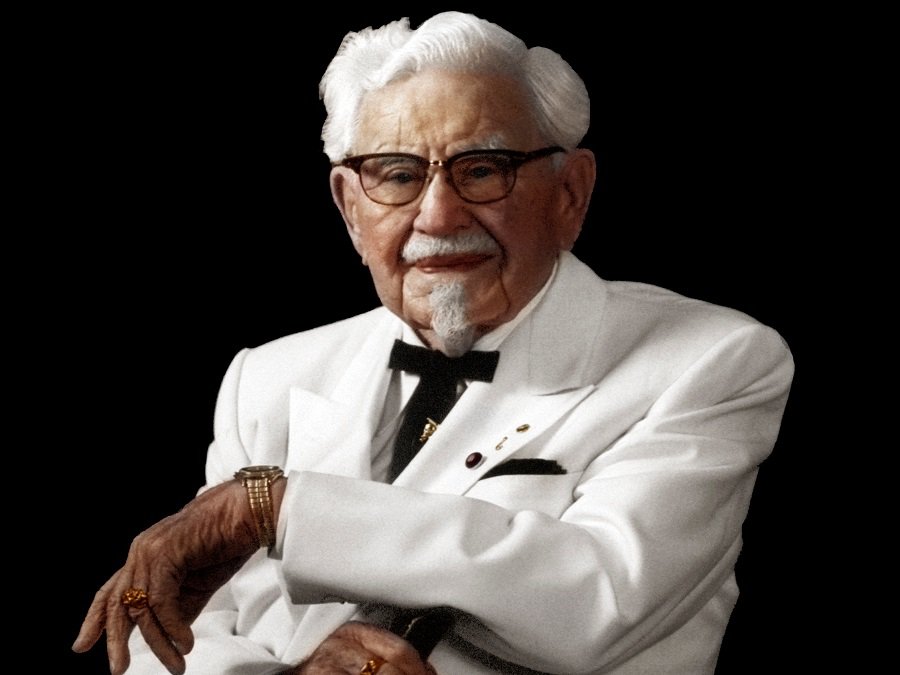 Most people are familiar with Kentucky Fried Chicken, or KFC as it’s commonly known. But few today are aware of the story of the man behind the restaurant: Colonel Harland Sanders. Born in Indiana in 1890, Sanders was the oldest of three. After his father’s death, Sanders began looking after his younger siblings when he was just five years old. His early experience and skill at cooking no doubt helped his business ventures later on in life.

Sanders began working as a farmhand at the age of ten, which was his first job outside the house. As he says here, Sanders gained a sense of the importance of hard work upon being fired after a mere month of working there. At age thirteen, he dropped out of the seventh grade and left home, working at various jobs for the next few years.

When he was just sixteen years old, Sanders joined the Army and was honorably discharged the next year. For the next several years, he worked many jobs for different railroads, during which time he married Josephine King, his first wife. For the next ten years, he worked a variety of jobs all around the country. Having studied law in his spare time, Sanders practiced law for three years in Little Rock, Arkansas. Afterwards, he went through brief stints working for the Pennsylvania Railroad, selling life insurance, and working in sales. His first major business venture, a ferryboat company, was a success. In 1922, two years after he started the company, he sold his shares and invested the money in a business that manufactured acetylene lamps, which ultimately failed due to competition from a manufacturer of electric lamps.

Sanders first got his feet wet in the restaurant business in 1930 when he sold homemade meals at a Shell service station he ran in Kentucky. His food was well-received, and, after adding a restaurant to the station so he could better serve his customers, he enjoyed regular business for most of the 30’s. It was also during this time that Sanders was made a Kentucky colonel, a title which he bore for the remainder of his life.

In 1939, Sanders experienced both success and tragedy. The success was his opening up a North Carolina motel; the tragedy was the burning down of his Kentucky restaurant. Despite being able to rebuild a much larger restaurant, he had to close down his motel in the early 40’s. The decade wasn’t a total loss for him, however, as he developed his famous Secret Recipe during those challenging years. Sanders finished up the 40’s by divorcing his wife in 1947 and marrying Claudia Ledington-Price two years later.

The 1950’s were when Sanders began seeing the first signs of his eventual monumental success. Several restaurant owners began franchising his food, and his limited income and savings after selling his Kentucky restaurant at age 65 lead him to seek more franchise opportunities. By the mid-1960’s, his efforts, the early ones involving sleeping in his car while trying to find interested restaurant owners, resulted in his opening restaurants in all across the U.S. as well as in four other countries. After selling the corporation in 1964 for $2 million (which is equivalent to more than $15 million after adjusting for inflation), Sanders spent the rest of his life managing his Canadian franchises and being the brand ambassador for KFC.

Sanders’s death at the age of 90 from leukemia in 1980 signaled the end of an amazing man. His life reflects many values which are important to libertarians. The most obvious is the value of hard work, which he did not only through his many jobs, but most notably through working his small roadside restaurant into a global franchise. Despite his difficulties, he never gave up or sacrificed quality for expediency or monetary gain. His hard work paid off not just for himself and his family, but also for the hundreds of thousands of people over the years who have worked at KFC. As many economists have pointed out, the best way to help someone out both in the short-term and the long run is to give them a job, which Sanders did both before and after his death. Further, he did what he could to help others get where they were heading. A driver who picked him up early on inspired him to do the same for other hitchhikers. Additionally, he often gave college students full scholarships, a practice which lives on through the KFC Foundation. This charitable spirit puts him in good company with steel magnate Andrew Carnegie, who gave much of his fortune away to good causes, and is something libertarians espouse as a better and more moral way to help people in need than the welfare state.

Despite all he accomplished throughout his life, Sanders remained humble and always strove to do more. In this clip from when he was 75, an age at which most people have long since settled down, he expressed a desire to keep going. That drive helped him during the difficult times and lead to one of the most successful and recognizable restaurants in history. Sanders’s life shows us what we can do with a solid work ethic, a good product, and a goal to hit. Think about that the next time you take a bit of his famous chicken.