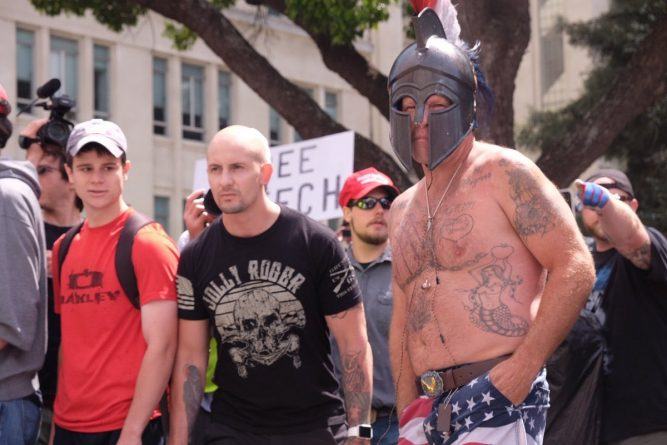 For the third time this year, Trump supporters and Antifa clashed on the streets of Berkeley, California. The two forces met Saturday during the pro-Trump Patriot Day rally.

Berkeley Police have arrested at least 15 people this morning and afternoon, after antifascists met Trump supporters at a pro-Trump rally, reported CBS News.

Police attempted to maintain order with poles and fence mesh, but the barriers did not stop the two sides from violently engaging.

Trump supporters had organized a Patriot Day rally, starring Lauren Southern, a former reporter for conservative Canadian outlet The Rebel Media and Kyle Chapman, a man who achieved internet stardom as “Based Stickman” after assaulting a member of Antifa with a stick at the March 4 scuffle in Berkeley, among others.

Berkeley police have confiscated banned items such as knives, flagpoles, and sticks used as weapons, according to CBS San Francisco.

Soros funding groups inside the United States like #Resist who hired paid protesters and caused violent riots like #Berkeley pic.twitter.com/WMfpJMVNao

Street fights everywhere in Berkeley. This is so nuts. pic.twitter.com/SZoc0MdxyE

CA Bay Area Cities Call for Impeachment of the President