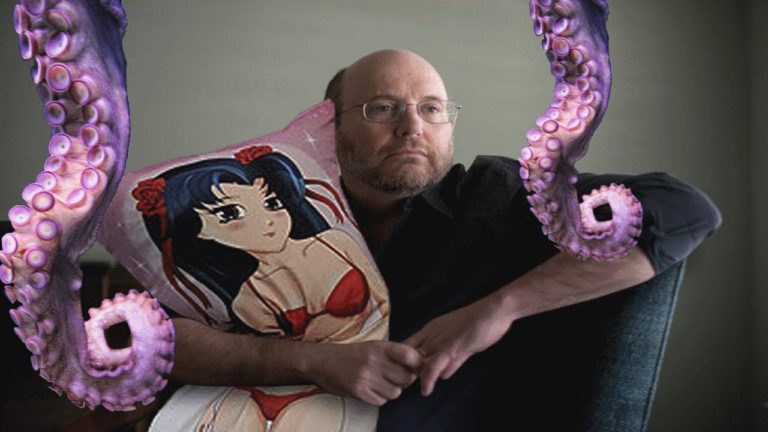 What in the hell is wrong with Kurt Eichenwald? The Former MSNBC and Vanity Fair contributor has been constantly obsessing over Parkland survivor Kyle Kashuv. Things came to a head when Eichenwald sent an unhinged email to Ben Shapiro, which Shapiro immediately tweeted out.

Ben Shapiro delivers a 6 minute explanation of the email on his YouTube channel below:

Eichenwald’s email to Shapiro claimed that Parkland teen Kyle Kashuv was working with Ben Shapiro and Fox News and various trolls in order to trick people into attacking Kashuv. This is despite the fact a quick glance of Kyle’s Twitter Account clearly indicates he’s a Parkland student. This is also despite the fact that voicing a difference of opinion on an issue is not trolling. The email also claimed that Kashuv was delusional, and in need of psychiatric care. Eichenwald also claims that he had a psychiatrist diagnose Kashuv on Twitter without his knowledge and sending a prognosis carelessly in an email, which if true (doubtful) would be as Joe Biden would say…. “A big f***ing deal”.

The ordeal began on March 30th when Eichenwald attacked Kashuv on Twitter in now deleted Tweets. 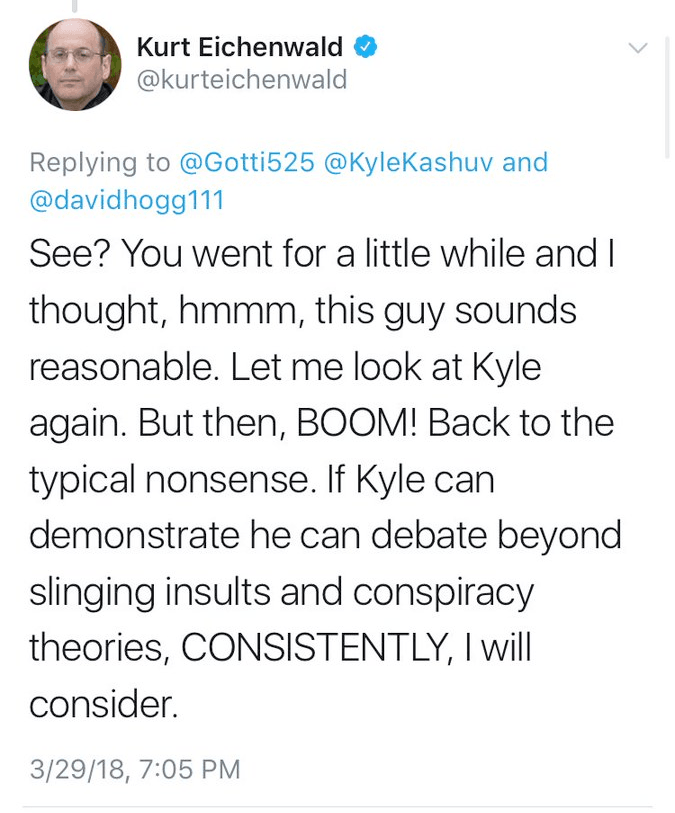 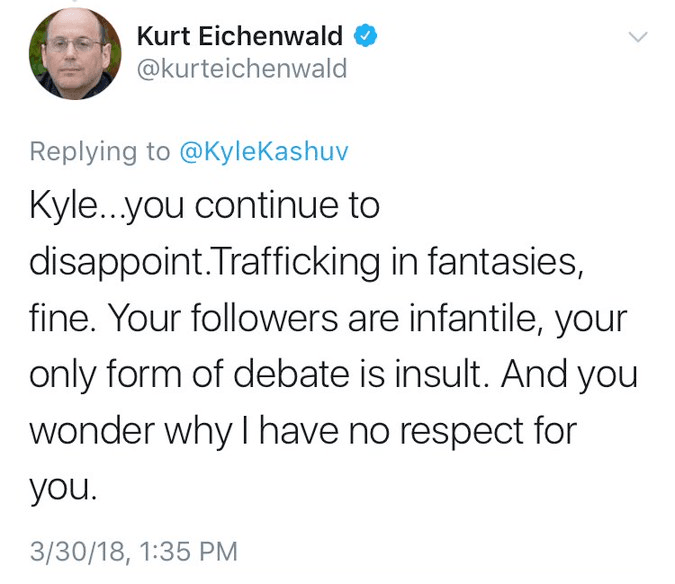 The only problem was, Kashuv hadn’t actually attacked Eichenwald until after these Tweets. According to Eichenwald, he had mistaken Kashuv for the African American adolescent conservative CJ Pearson.

WAIT! @KyleKashuv. I apologize. I thought you were someone else who keeps challenging me to a debate with insults. I probably have in the past. This is the first tweet where I know who you are. Nothing else I said is relevant.

I owe an apology to @KyleKashuv. I have no idea how many times I have commented to him. There is a high school kid who has a podcast who keeps challenging me to debates with insults. I mixed up their names. Please ignore every tweet Ive sent. They were written for someone else.

On a more serious note, Kurt: If you made a mistake and you’re truly sorry, apology accepted. We should all be more forgiving — including you (and others) of Laura Ingraham.

When will you and MSNBC do the same for Laura? https://t.co/x8W5mkD85T

Kashuv in the above tweet accepts the apology, but reminded him that he himself went on the attack against Laura Ingraham for poking fun at David Hogg for being rejected from colleges. Calling Eichenwald out on this similarity set him off, leading to the emails he sent to Ben Shapiro.

Eichenwald claimed in this conspiracy of his, that it was all an elaborate attempt to de-legitimize the boycott against Laura Ingraham. Nobody is attempting to de-legitimize it. The question is whether the left will hold themselves to the same standards. The claim of de-legitimization of outrage against Ingraham is proof enough that Eichenwald clearly does not hold himself to the same standard. It essentially claims that he views his attacks as legitimate, based purely on his identity politics.

In case you’re wondering what Eichenwald’s standard is that he doesn’t hold himself to, here it is:

Hopefully the Laura Ingraham blow-up will teach conservatives: You are not "debating" gun control when you insult survivors of a mass slaughter for advocating laws you dont agree with. You are just being infantile bullies.

So not only does Eichenwald not hold himself to the same standard, but he’s pushing the envelope in attacks against Kashuv in an attempt to be exempted from his own standard by making things up. This is insane. But here is where things get interesting. As it turns out, Eichenwald does not have contracts with MSNBC or with Vanity Fair like he claimed. He used the Vanity Fair logo in his email signature to Ben Shapiro when he stated he was writing an article about Kashuv in this dreamed up conspiracy.

Statement from a Vanity Fair spox: "Kurt Eichenwald is not a contributing editor at Vanity Fair."

So since Kurt was clearly not a current contributing editor, I only thought it prudent to ask a question of Eichenwald. If he was not contracted with Vanity Fair, which his email signature falsified, then who in the world was he writing an article for about his dreamed up conspiracy? Well, he blocked me on Twitter just for asking.

There was one clever response to my question though.

In reference to Kurt stating he had a psychiatrist evaluate Kashuv’s tweets:

The common advice to Eichenwald appears to be, disappear for a while.

But seriously, the tentacle jokes will never get old.

Fact or Crap? A Review on the Legitimacy of FinMarket