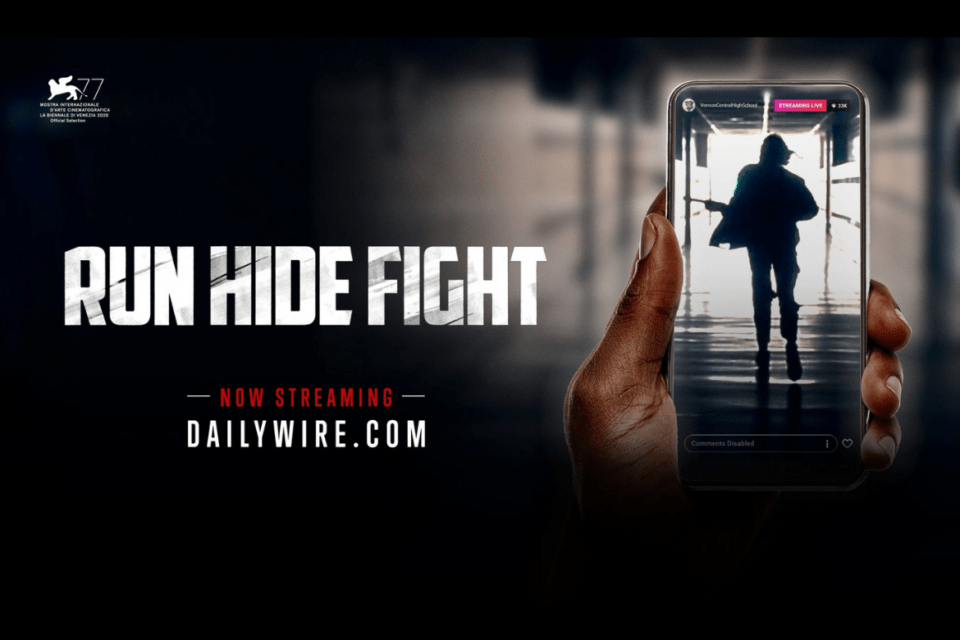 “Run Hide Fight” is an American action thriller film written and directed by Kyle Rankin. The movie’s release has generated mixed reviews and controversy because it is distributed by The Daily Wire, a conservative media site co-founded by Ben Shapiro.

In “Run Hide Fight,” 17-year-old Zoe Hull fights to save herself and her fellow students when shooters hold them hostage, livestreaming their killing spree as they terrorize her high school. It is notable for two reasons: it is surprisingly better than people expected from a politically conservative news website; and, the disparity in ratings between the the audience at 93% out of the more than 1,000 viewers on Rotten Tomatoes, and a rating of 23% from 13 Tomatometer critics.

In a review for The Spectator, Deborah Ross criticized the film as having “no psychological depth beyond offering up the occasional cliché – one of the shooters was bullied at school, for instance.”

One of the theories of why people commit crimes is the sociological theory of crime, which says that people commit crime because of the social and environmental factors around them. Bullying isn’t a good environment for someone dealing with biological and psychological problems. The best movie line to describe this phenomenon comes from Joker: “What do you get when you cross a mentally ill loner with a society that abandons him and treats him like trash? You get what you f**kin’ deserve!”

Film critic Jonathan DeHaan admitted enjoying the movie, but only if it could be watched without subscribing to The Daily Wire. “It’s usually pretty easy to avoid The Daily Wire but they’re in the movie distribution business now, with “Run Hide [Fight]” marking their entry in this new arena. Big deal, right? Who cares? You just want to watch a movie. But suddenly, The Daily Wire has made just watching a movie a morally complicated, politically charged act. Ughhh. …If the opportunity arises for you to see Run Hide Fight without subscribing to The Daily Wire (which, unfortunately, is the only place the film is currently available), I’d encourage you to check it out.”

In fact, that’s one of the underlying themes from negative reviewers. They don’t like that it is distributed by The Daily Wire. Another common complaint is that it doesn’t touch on mental health the way they wanted. Not only did critics not like that the movie is being distributed by conservatives, but they also don’t like what they say is the implied message—the way to solve the school shootings problem is with more guns.

In one of the more positive reviews from the Tomatometer critics, Rob Hunter headlined his critique with, “’Run Hide Fight’ Delivers the Best and Meanest ‘Die Hard’ Knockoff in Years. If you can stomach the premise and ignore the outside controversies, what you’ll find here is a highly satisfying little action movie.”

I watched “Run Hide Fight” and found the acting, plot, and themes to be surprisingly well done. Even the negative reviewers agree that the aspects of the thriller movie they liked are the acting and the story. I definitely recommend watching it, and would personally rate it 8/10. The only thing I would have changed was the ending, which I won’t spoil.

After their first foray into film, I’m excited for the latest developments with Gina Carano and what she will bring to The Daily Wire team. Now, if only The Daily Wire could buy the rights to Star Wars, then Ben Shapiro could destroy The Empire with facts.

How and Why to Use and Choose BBQ Mats?

Hit by a Fire Truck: Who Pays the Damages?