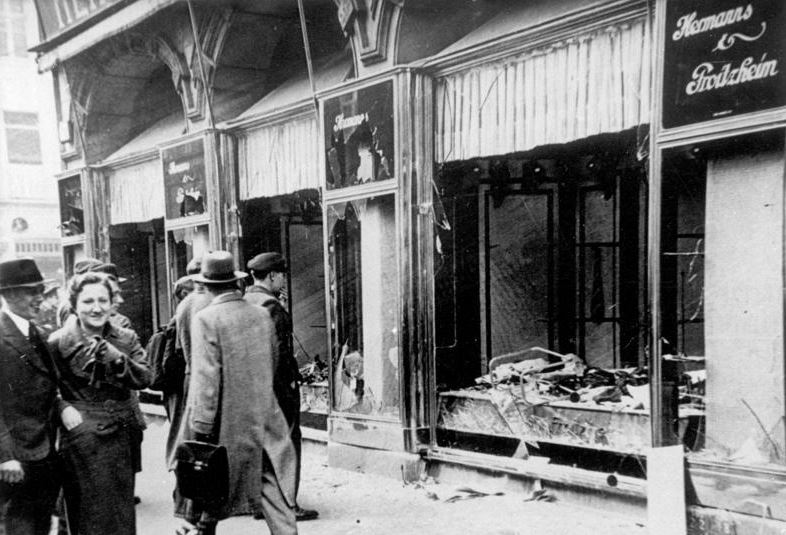 November 9th marks the eightieth anniversary of Kristallnacht, or the Night of Broken Glass, in Germany. Earlier that month in 1938, a young Jew of Polish descent, Herschel Grynszpan, having learned of his family’s forced expulsion from their home in Hanover, Germany, bought a revolver, entered the German embassy in Paris, and killed Ernst Van Roth, a minor official who ironically was under investigation by the Gestapo, possibly for sympathizing with the Jews.

Van Roth’s death set off a firestorm of Nazi hatred and anti-Semitism in Germany. On November 9 and 10, thousands of Jewish businesses, synagogues, homes, and cemeteries were ransacked or vandalized. The rampaging mobs destroyed countless valuable books, manuscripts, and works of art. Over 100 Jews were murdered—some say the figure is much higher—and many others were beaten or humiliated.  Thousands boarded the trains for concentration camps.

During the ensuing months, some 115,000 Jews who could afford to do so left Germany, though many later faced Nazi oppression and death when the armies of the Third Reich invaded neighboring countries.

One little known fact about Kristallnacht is that the savagery and brutality of those who attacked the Jews roused widespread dismay and condemnation among the German people, including some in the Nazi party. Aware of the protests from other countries and the hostility of many Germans to its treatment of the Jews, the Nazi propaganda machine made efforts to repress news of the destruction, allowing it to be reported in Germany only on local levels.

These days, anti-Semitism is again on the rise in some European countries. Though violent assaults against Jews are down in the last few years, incidents of harassment and threats have increased. In Germany, Jewish community centers, schools, and synagogues have round-the-clock police protection. France has seen a rise in the number of Jews immigrating to Israel, citing as one of their reasons fear for their safety and that of their children. The Guardian reports that in 2017 incidents of anti-Semitism in the UK reached record highs, occurring at the rate of four per day. These attacks range from vandalized cemeteries to swastikas painted on businesses and synagogues, from anonymous phone threats to catcalls in the street.

Those who know more than I about the cause for this increase in hatred blame the neo-populists and radical Islamists. (The latter carry out the great majority of violent attacks and killings.) Some of those on the Right have voiced their prejudices against Jews. Some imams and members of the Islamic community have called for death to the Jews.

Recently, some have blamed Donald Trump and the move of the American embassy to Jerusalem for causing an uptick in these incidents. Perhaps, but Europe’s longstanding dislike of Israel, fueled by Muslim immigrants from the region, surely bears the greatest responsibility for this present situation.

Dr. Moshe Kantor, president of the European Jewish Congress, offers an additional explanation. He believes that anti-Semitism has entered a new phase, that bigotry has regained respectability among certain groups. Of the Holocaust, he says, “As the memory fades, we risk forgetting, and if we do then there is the very real risk of the past repeating itself.”

Looking at this situation as an outsider, I detect one other contributing factor to this rise in anti-Semitism. (And it’s not just a European phenomenon, but worldwide.) The governments of European countries are quick to attack the anti-Semitism, perceived or real, of what they dub “Far Right” groups opposed to immigration. On the other hand, they all too often turn a blind eye to Islamic anti-Semitism, fearful of being labeled racists or bigots.

Is it time to call this problem what it is instead of dancing around the issue?

This post Kristallnacht: Are We Experiencing the Modern Version? was originally published on Intellectual Takeout by Jeff Minick.