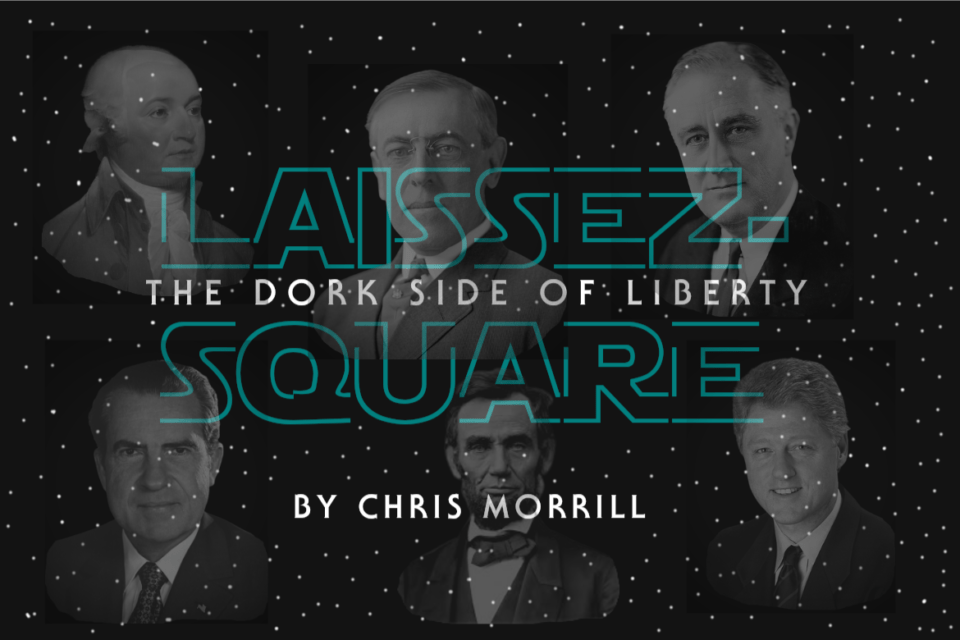 The night before the election, Libertarian Party presidential nominee Jo Jorgensen tweeted that, in her opinion, neither Donald Trump nor Barack Obama was the worst president of all time. She instead awarded that dubious title to Woodrow Wilson.

This touched off a separate Twitter conversation between a friend and I about who we personally considered the worst. Libertarian types can find something to complain about in every single person who has ever held that office, or soon will. But since saying “Well, they all suck” is a bit of a cop out, I chose to instead identify the suckiest and least suckiest presidents. Then I thought: “I should take this and make it into a column.” And so I did.

This isn’t a list of the most or least libertarian presidents; I instead tried to take a more Gestalt approach and evaluate them in a big picture way. To complicate matters a bit further, I’m going to split the shit list into two categories: worst presidents by policy and worst presidents by corruption and/or general incompetence.

Our second president was also our very first one-term president, and for good reason. His backing of the Alien and Sedition Acts alone warrants his appearance on this list. He sucked up to monarchist Britain in their war against republican France, and was a little too enthusiastic about monarchism and Federal power in general.

The original hotheaded, threatening, perpetually angry president. Think Trump, but with a military background. If Twitter had existed back then, one can only imagine Jackson being quite prolific there, rage-tweeting during his morning constitutional and the wee hours of the night.

Despite being a Southerner, he had no particular love for the South, especially South Carolina. (Which was awkward, considering that his first Vice President was South Carolina firebrand John Calhoun.) The Civil War almost started about thirty years early because of the Nullification Crisis. Jackson defended tariffs, threatened the Supreme Court, and laid the groundwork for the Trail of Tears.

Old Hickory was the worst thing to happen to Native Americans since smallpox. In spite of this, the town next door to me is named after him. As proof that some folks are impervious to irony, they named their high school’s sports teams…the Indians.

This one is going to get me in some trouble, because after all, Honest Abe freed the slaves, and everyone agrees that slavery is bad.

Lest you think the Great Emancipator was some enlightened champion of racial equality, as it turns out he held quite a low opinion of Black folks through most of his life. Right up until the first shots were fired at Fort Sumter, he was willing to allow slavery to continue in places where it already existed, having tacitly endorsed the Corwin Amendment.

It would be harder to question Lincoln’s motives if he had just come out and said, from the start, that freeing the slaves was the ultimate goal. That’s not how he played it, though.

A skeptical person might be tempted to think that the Emancipation Proclamation was more of a toothless public relations move than an act of pure goodwill. Or a ploy to keep France and/or the United Kingdom out of the war.

Far be it from me to be a skeptic, though.

Dr. Jorgensen had a point: Wilson was a rolling disaster spread over two terms.

Under his presidency, America was saddled with such things as the federal income tax, the Federal Reserve system, and Prohibition. (Though to Wilson’s credit, he was at least mildly opposed to Prohibition.) He entered the country into World War I after promising to keep us out, and then sowed the seeds for World War II with his pie-in-the-sky contributions to the Treaty of Versailles. His lust for foreign intervention might make him the honorary first neocon. And oh yeah, he was the most overtly racist president besides those who, you know, actually owned slaves back in the day.

If there is an anti-intellectual undercurrent to American politics, it may be because of eggheads like Wilson.

I present to you the father of the modern welfare state. He implemented the New Deal, which set the precedent for government writing checks to individual people for doing…nothing. FDR virtually created the concept of “make-work.” He tried to pack the U.S. Supreme Court (an idea which is somehow now back in vogue in certain circles.) He took the United States off the gold standard.

While I do not believe he knew in advance about Pearl Harbor, let’s just say I doubt that he was terribly upset about it. During the World War II he desperately had wanted, he interned numerous citizens of Japanese, Italian, and German descent. Seeing himself as more worthy than George Washington, he served a preposterous three terms and part of a fourth.

If FDR gave birth to the modern U.S. welfare state, LBJ took that baby and gave it steroids. Medicare, Medicaid, and food stamps can all be traced back to his “Great Society.” He escalated the Vietnam War. Certain aspects of the Civil Rights Act of 1964 are troublesome to libertarians from a “freedom of association” perspective.

Reputed to possibly be America’s first gay president, Mr. Buchanan is mostly known for staring at his navel as Southern states started to secede following the election of Abraham Lincoln. (Though, that could also be viewed as a good thing from a certain point of view.) He also thought that the Dred Scott decision was just hunky-dory.

Not only was he the first Vice President to ascend to the Oval Office, he was the only Vice President chosen from a different party than that of his Presidential candidate. He was allegedly drunk at his own swearing in.  What could possibly go wrong?

John Wilkes Booth, that’s what. A Southern Democrat ends up in charge of Reconstruction for almost four years. Hilarity ensued. It would have made a decent sitcom if sitcoms had been around in the 1860s.

His fights with the Radical Republican Congress culminated with his impeachment in 1868, in which he escaped conviction and removal from office by one vote. And he definitely violated the law that spurred his impeachment, even if the Supreme Court would much later cast doubt upon its validity.

Alleged to have his own drinking problem (not that there’s anything wrong with that), Grant’s two administrations suffered from so many scandals that the scandals have a rather lengthy Wikipedia page all to themselves. A good time was had by all in D.C. under the former general; the South, not so much.

While Grant himself was never personally implicated in any of the many misadventures of his administrations, he gave his underlings very long leashes which they took full advantage of.

Actually a fairly popular president, Harding had the good luck to die in office before most of his shit hit the fan. But hit the fan it did, including the amusingly titled Teapot Dome kerfuffle.

His Vice President would have to clean all that up; but we’ll talk about him next week.

People forget how popular Tricky Dick was before things hit the skids. He had served as Vice President for eight years under Eisenhower, then ran for president three times, losing (barely) the first time and then winning twice.

Less than two years before being ran out of office, he had won forty-nine states and a whopping 520 electoral votes. And though he was despised by the left, he was actually fairly liberal for a Republican. For goodness sake, he’s the president that got us out of Vietnam. They should’ve loved him for it.

Alas, Watergate was what it was and he had to go. His Vice President also had a mess to clean up, but didn’t do quite as good a job as Harding’s #2.

I’ve seen some folks jokingly call Bubba “the most conservative president of the twentieth century.” There’s some truth to it. He’s the last president to balance a budget, for example. How much of that was him and how much was a hostile Republican Congress is debatable.

Despite all of his political skills (which were considerable), Clinton was and still is a scumbag. And not just because of his horndog nature. Like Grant, he has his own Wikipedia page devoted to the various scandals. His wife contributed several of her own, but did not have the charisma to escape electoral consequences like he did.

His impeachment was well warranted. Folks like to say it was “just about sex,” while conveniently forgetting that he perjured himself about that same sex (a material fact if there ever was one) in the Paula Jones civil case while he was serving as President. Which, y’know, should be discouraged.

I have to put an asterisk on this one, since he’s still president and it takes several years for these things to flesh out or fully come to light. Furthermore, I still need to write a post mortem on his presidency if/when he ever actually concedes or leaves office. But hoo boy: this has to be one of the most disorganized, chaotic, feckless, and downright crazy administrations in American history. If not the absolute craziest.

His impeachment was also warranted, though I will admit that the case was not as cut-and-dried as Clinton’s was (or should have been.)

If Congress would actually convict and remove a president every now and then, perhaps we wouldn’t have to deal with such an imperial presidency.  Maybe they’ll actually convict next time they have the chance? Don’t bet on it. As George Carlin said: “It’s a big club, and you ain’t in it.”

Next week we’ll look at the least harmful of our chief executives.