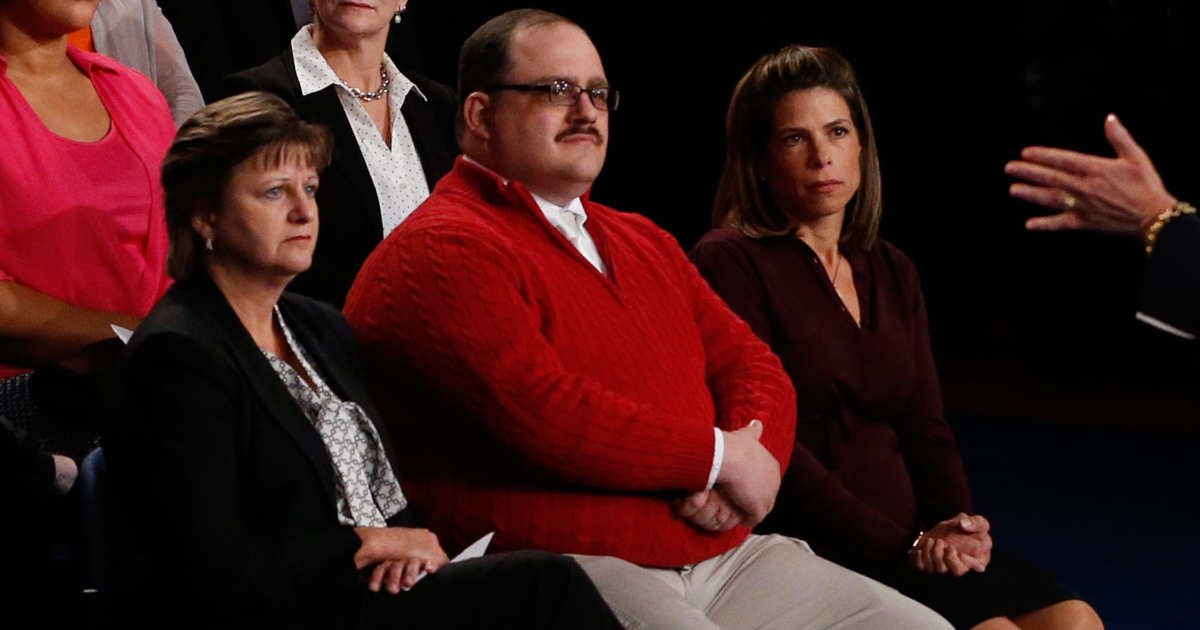 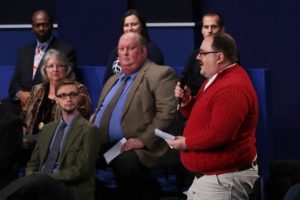 The highlight coming out of the second presidential debate did not happen to be any substantive policy, or shocking revelation from the candidates. No, it happened to be, Ken Bone, one of the many undecided voters who questioned Republican candidate Donald Trump and Democratic candidate Hillary Clinton.

Bone, who was at the debate to help decide which of the candidates he would vote for, put up with a 14-hour sequester in order to get the opportunity to ask the presidential candidates a question on energy.

What steps will your energy policy take to meet our energy needs, while at the same time remaining environmentally friendly and minimizing job loss for fossil power plant workers?

As it would turn out, Bone, while in the spotlight and asking his question, started his trip to internet stardom.

Viewers of the town hall debate fell in love with Bone. Comments about his mustache, his outfit, and his use of a disposable camera began to whirl on Twitter.

Be the Ken Bone you want to see in the world.

Seeing a lot of Harambe/Ken Bone comments so I’m wondering who will go as Harambe DRESSED as Ken Bone for Halloween?

His camera may be disposable but Ken Bone is not. #kenbone #debates https://t.co/XyVhMHejXH

Bone has had memes created in his honor, auctions of fake mustaches, versions of his sweater selling out at various store outlets, and even has celebrities working in his honor.

Stephen Colbert loves Ken Bone as much as you do—and has the song to prove it https://t.co/7GXRkxJ8mh

There is an 85% chance that Ken Bone married his high school sweetheart and just completed his first 5K.

Nice sweater @kenbone18. U should get it in blue. Come to the crib and smoke 1 wit Tha Dogg

Hillary Clinton’s official Twitter page even made mention of the new star.

At the debate, the impeccably dressed Ken Bone asked a great question about meeting our energy needs. Hillary’s response: pic.twitter.com/iaT5yVYW7K

Now, through his new found fame, Bone has begun to receive a flurry of media requests from Jimmy Kimmel Live to Fox and Friends. During his appearance on the former, host Jimmy Kimmel had a lot of questions for Bone, most importantly whether or not he had decided who he was voting for. His response was pretty honest, and told us a lot about his personal philosophy.

Kimmel- Are you still undecided as a voter? I know that is why you were there in the first place.

Bone- Everybody doesn’t like it that much, but I think I am more undecided than I was before. I had to kind of put my head down while Mom and Dad were fighting over Thanksgiving dinner last night.

Kimmel- Are you like an indecisive person in general?

Bone- Uh, not usually. This is an unusual political cycle, it’s been so negative, and I try to really base most of my decisions on positive things and neither of them have given me any. Donald Trump is maybe more in line with my economic interests because I work in coal, electricity, but I would really hate for anyone’s rights to be taken back. We’ve fought so hard to get marriage equality and rights expanded to more Americans and I couldn’t… it would be unconscionable for me to see those taken away by a Supreme Court Justice appointed by Donald Trump.

It seems like Mr. Bone may be a libertarian and not know it, as with the Libertarian Party, he could have both fiscal responsibility and social freedoms.

Regardless of where Bone decides to vote in the end, his breakout during a Presidential debate and his honest comments about the debate point to a glaring flaw in this election. The major party candidates have been completely overshadowed by a fun loving, humorous gentleman simply because he was the single positive aspect of the debate.

The mudslinging and ad hominem attack campaigns appear to have worn voting Americans down. Couple that with the fact that both major candidates have prominent negative polling numbers, and you’re left with the rise of Ken Bone as the savior of the debate.

Check out some of the other hilarious tweets sent out regarding Ken Bone below:

Ken Bone is the new Damn Daniel. Give it a week. Damn Ken Bone back at it again in the red sweater

I made this ya mans ken bone lmao https://t.co/XicGpfFBPv