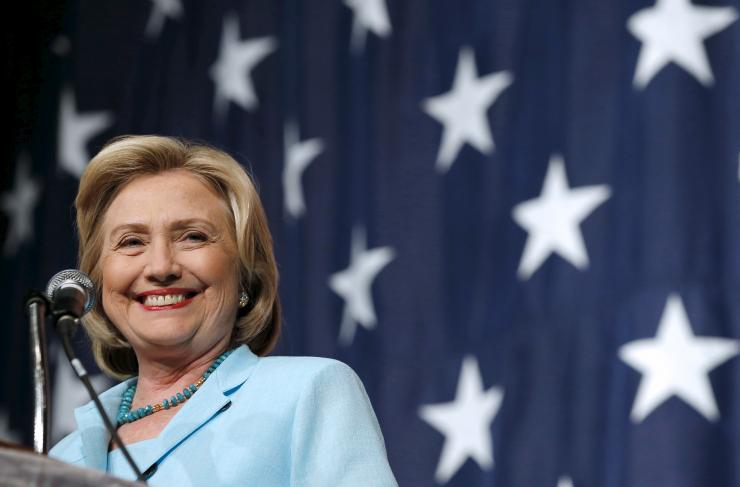 New York Times reporter Mark Leibovich appears to have been working for the Hillary Clinton campaign in the summer of 2015 when he wrote a story for NYT Magazine called Re-Re-Re-Reintroducing Hillary Clinton.

After recording and transcribing the interview, Leibovich emailed the Clinton campaign’s Director of Communications, Jennifer Palmieri, to request portions of the interview to use in the article.  Palmieri forwarded the email conversation to John Podesta.

The first message in the exchange was Palmieri contacting Leibovich, which clearly communicates that Palmieri had access to the transcript of the interview. She complained that she couldn’t access the transcript from her iPhone on the place in order to “cut and paste.”

In her sign off to Leibovich, she wrote, “Pleasure doing business!” 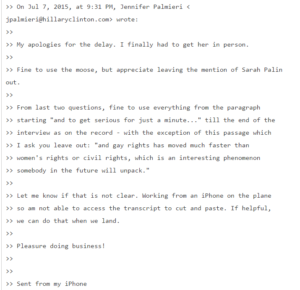 Leibovich didn’t find the email clear, and asked about other things he wanted to use.  He included several exchanges of banter he’d recorded with Clinton: an Alaskan encounter with a moose, an experience on a blind date, the psychological damage done by Internet use, relating to people, being a “normal person,” and “running as a woman.”

He indicated that Palmieri could veto the use of any or all of the conversations. 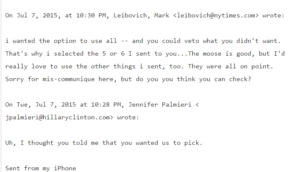 Granted, Leibovich’s article is a fluff piece designed to humanize Clinton and make her more relatable to voters. It included an alleged pen pal of Clinton’s from her high school days who saved letters that thee then-Hillary Rodham wrote to him. Here is Leibovich’s description of the letter:

In one, she described her wish of being a little girl again and her childlike sense of being alone in the universe. ‘‘Everyone else would disappear’’ if she turned around quickly, she wrote. ‘‘I’d play out in the patch of sunlight that broke the density of the elms in front of our house and pretend there were heavenly movie cameras watching my every move.’’ She wrote of how she craved all of the excitement and discoveries of life without losing ‘‘the little girl in the sunlight.’

I’m not sure if this description of young Hillary Rodham makes for future presidential material, but perhaps some readers found it compelling in some way.

One wonders if those who read the article when it was published had any idea that the piece was scripted by the campaign and that the reporter was apparently doing business with the campaign in some way.

At the very least, Leibovich’s article is a violation of the New York Times Standards and Ethics, and he should be summarily dismissed from the publication.

Alex Jones and Christopher Cantwell are Cancerous to Liberty Movement