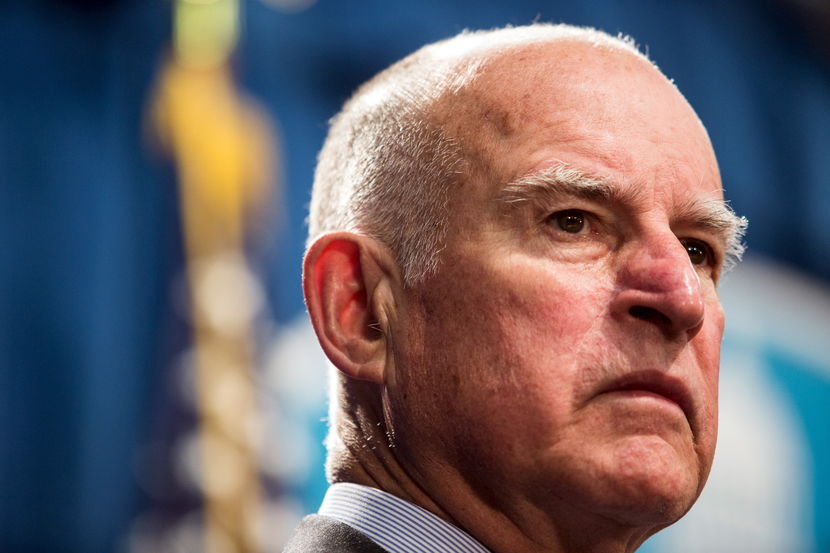 California Gov. Jerry Brown called climate change a threat to humanity Thursday in a desperate attempt to get California lawmakers on board his beleaguered plan attacking man-made global warming.

Brown is trying to shame his fellow Democrats in the California legislature into getting on board his mission to extend the state’s cap-and-trade program. His pleas have had little effect on Democrats, many of whom are still licking wounds incurred from their decision to dramatically increase the state’s gas taxes.

“America is facing not just a climate crisis with the rest of the world, we are facing a political crisis,” Brown told lawmakers at the first public hearing intended to discuss reducing carbon emissions. Failing to act on the measure, he added, would mean giving in to climate change, which he called a “threat to organized human existence.”

“This isn’t for me. I’m going to be dead. It’s for you. It’s for you and it’s damn real,” he said, while turning to the crowd in the Senate Environmental Quality Committee hearing. Brown’s pitch is part of a months-long effort to transform himself and the state of California as a type of anecdote to what he sees as President Donald Trump’s threat to the climate change movement.

Brown’s ire was raised after Trump moved to detach the U.S. from the non-binding Paris climate agreement, a move that activists and Democrats called monstrous. The Democratic governor, who is getting termed out in 2018, forged a complex coalition of states committed to approving planks of the deal shortly after the president’s move.

The non-binding agreement, which former President Barack Obama signed in 2015, commits each country in the deal to lower greenhouse gas emissions that scientists believe are causing man-made global warming. Nicaragua and the U.S. are among the handful of countries that have chosen to opt out of the agreement.

Democrats might be thrilled with Brown’s anti-Trump rhetoric, but they worry that the governor’s efforts on cap-and-trade could thrust already vulnerable lawmakers out of the frying pan and into the fire.

Kip Lipper, an environmental advisor for Senate leadership wrote in an email in May that there were “no plans to take up a cap and trade reauthorization bill anytime soon.” He noted that lawmakers are “gas tax weary” about the possibility of shoving through another vote so quickly after their unpopular move to raise the state’s gas tax for road repairs.

Californians have signaled their disdain for Brown’s signing of the Road Repair and Accountability Act, which imposes 12-cent per gallon increase on citizens, and raises the tax on diesel fuel by 20 cents a gallon.

Some of the gas tax’s opponents even contributed signatures for a recall effort against Democratic state Sen. Josh Newman for his support of the bedraggled laws, and another lawmaker is moving forward on an initiative to repeal the unpopular gas tax. Democrats have changed some of the rules governing recalls to help supply cover for Newman.

Environmentalists, meanwhile, believe Brown and other Democrats watered down the cap-and-trade legislation too much to pull in weary Democrats. Some of the provisions within the program allow companies free allowances throughout the next decade.

The deal will reduce the free allowances by 40 percent, starting in 2030.

California is slated to sell-off allowances through auctions starting this August. The state is doling out some allowances for free to help them remain competitive and avoid price spikes for consumers. Industry groups say the provision will help California residents dealing with already high gas prices.

Companies can also offset their emissions through projects designed to mitigate the effects of greenhouse gases. Money from the program goes into a greenhouse gas reduction fund propping up energy conservation efforts, and housing projects, as well high-speed rail, a pet project Brown has pushed for years.

Some Democrats have issued support for both Brown and the carbon emission reduction plan. Obama-era EPA Administrator Gina McCarthy and former Deputy Administrator Bob Perciasepe, for instance, endorsed the cap-and-trade extension in a letter to reporters Thursday

“A quick and positive vote from the state Legislature to extend its historic cap-and-trade program will be a critical leap forward for our country,” they wrote.

One of California’s most recognizable Democrats suggested the legislation would help wing Trump on the global warming issue. “[The legislation] incentivizes the private sector to reduce its carbon footprint and the revenue generated is used to invest in programs that enable even further emission reductions,” California Rep. Nancy Pelosi, said in a Thursday statement.