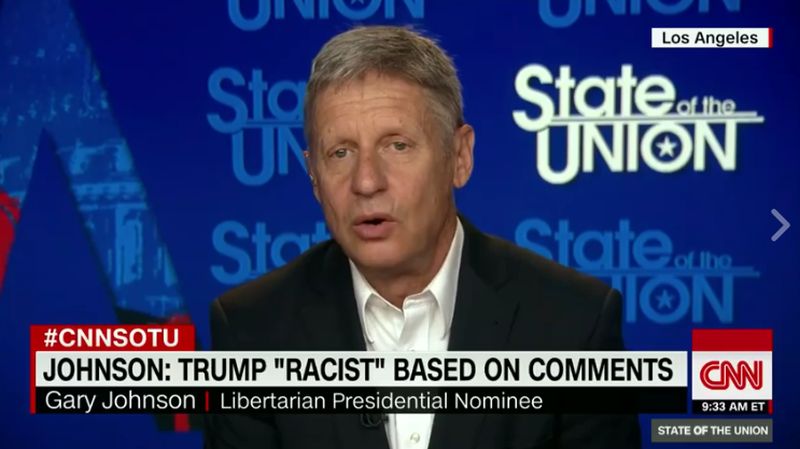 Throughout the 2016 presidential campaign, Donald Trump has built his appeal on inflammatory statements. While acting as an equal-opportunity offender, most of these remarks have been at the expense of minority communities, such as Hispanic and Muslim Americans. Libertarian candidate Gary Johnson isn’t letting him get away with it.

“The stuff he’s saying is just incendiary,” Johnson fired off on the CNN show State of the Union. Johnson was agitated with Trump’s characterization of Mexican immigrants as “murderers and rapists,” and laid into Trump on those grounds. As Johnson stated, with the support of many statistical studies, immigrants are actually less inclined towards crime than native-born Americans.

The pivotal moment in the interview came when host, Brianna Keilar, acknowledged that Trump’s remarks may be incendiary, but questioned whether or not Trump himself was actually a racist. “Based on his statements, clearly,” Johnson replied. Johnson went on to conflate Trump with “the definition of racism.” You can watch Johnson’s response below:

This interview came on the heels of a Trump rally where an audience member asked about replacing Transportation Security Administration employees who wear, as she put it, “hibi-jabis.” Instead of rejected such ignorant and Islamophobic remarks, Trump simply replied, “I understand.”

Throughout Trump’s entire campaign he has embraced similar controversial situations, and subsequently reaped the rewards of media attention. In the past, a rally member inquired, “when can we get rid of them?” in regards to Muslim Americans in this country. Once more, Trump offered no rebuke and even went so far as to say, “we need this question!”

When Trump’s GOP colleagues took aim at the front runner, they all met their demise in the polls and slowly but surely dropped out of the race. While other high ranking members in the GOP, such as Paul Ryan, have called him out on this, it generally has been to little avail. There seems to be little political benefit to pushing an agenda in the GOP that doesn’t discriminate on the basis of heritage and religion.

This is where Johnson has a golden opportunity to separate himself. While he and his running mate, former Massachusetts Governor William Weld, are both former GOP members, they are far removed from the abrasive elements of the party that Trump has rallied. For all of the rank-and-file members who would otherwise leave the party, Johnson-Weld provides an option for fiscal sanity without the racist frills. In Trump’s case, the fiscal sanity qualification can be called into question in its own right.

Johnson may not be leading in the polls, or even at a point to qualify for the presidential debates, but he is providing some sanity into an otherwise ridiculous race. If he keeps it up, and remains unafraid to call out bigotry as he encounters it, he could attract enough tolerance-minded Americans to bring libertarian ideology to the main stage.