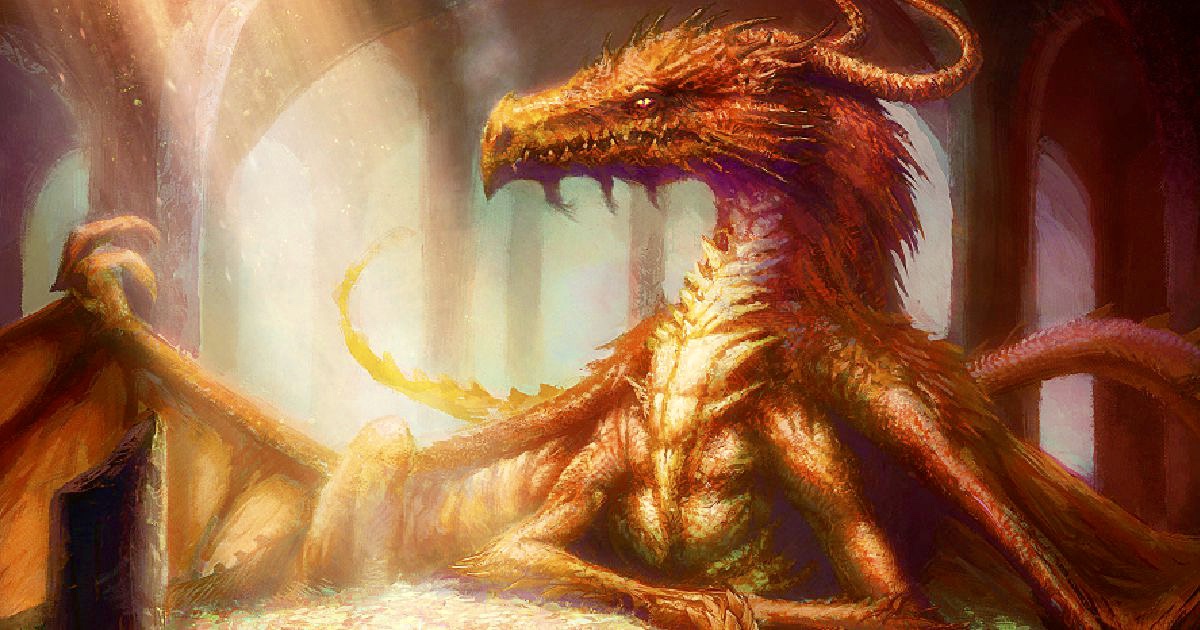 Are billionaires human dragons? That was the hot take of one person on Twitter: 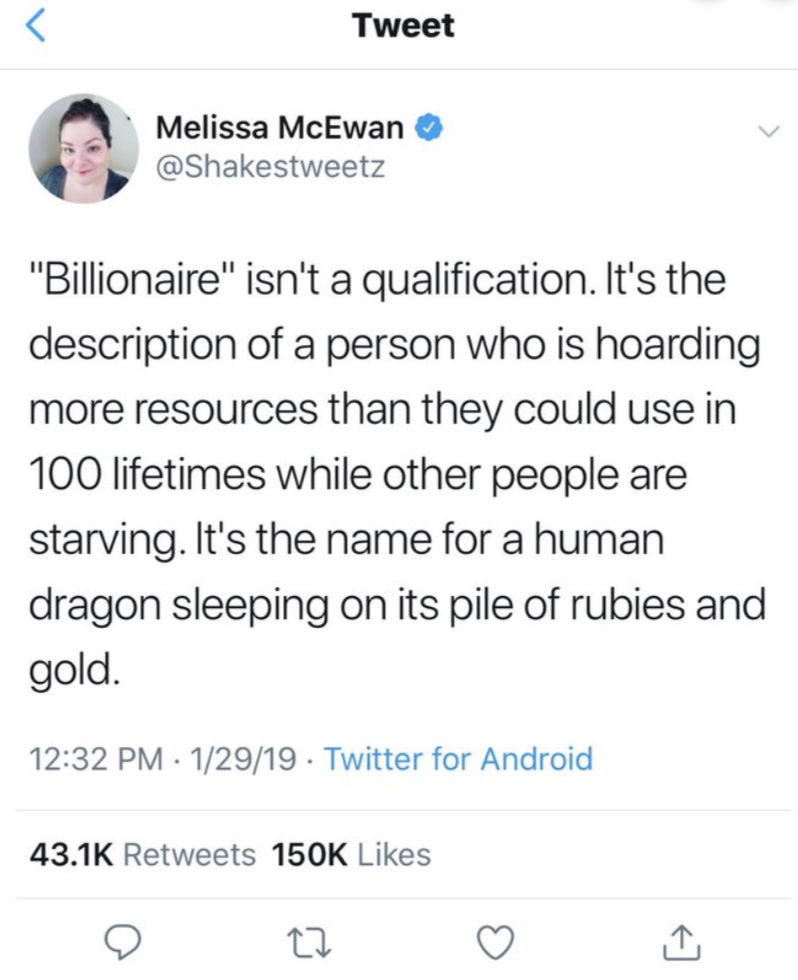 And look how many people agreed with her! 43 thousand retweets and 150 thousand likes when this screenshot was taken.

So what does that make Amazon CEO Jeff Bezos? Is the richest man in the world the ultimate monster? Is Bezos basically Smaug, the big, bad dragon from The Hobbit? Let’s compare the two to find out.

First, let’s consider Smaug. What’s he all about?

In the movie The Hobbit: The Desolation of Smaug, we first meet the beast when Bilbo the hobbit sneaks into his lair. And what does Bilbo see? Treasure. Lots of it. A pile of gold, just like in the viral tweet. A pile so big that Bilbo has to literally hike over it. 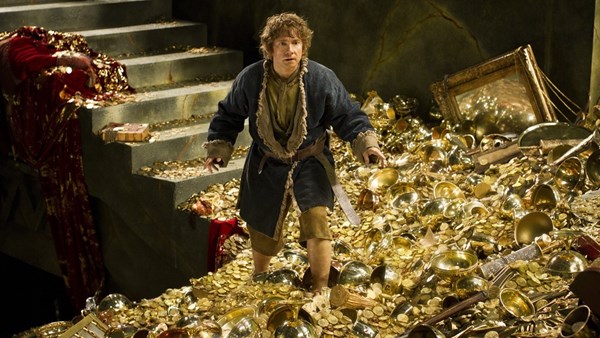 That’s pretty typical of dragon stories going back thousands of years. So let’s call that:

Dragon Quality #1: Has a treasure stash of epic proportions.

Looking for a powerful gem, Bilbo accidentally causes a mini-avalanche of gold, revealing a giant eye. It’s the eye of Smaug. And it’s closed. The dragon is sleeping, just like in the tweet. All that loot, and he’s too busy snoozing to even enjoy it.

That’s another classic bit in dragon stories. So now we have:

Then the eye opens (a freaky moment in the film) and Smaug emerges.

He calls Bilbo a thief and says he won’t give up a single coin. Then he tries to charbroil and eat our hobbit hero.

Talk about a greedy jerk. There are humans living in poverty nearby. And Bilbo’s homeless dwarf friends really need some of that treasure. Plus, it’s rightfully theirs anyway. Years ago, Smaug massacred their kingdom, stealing their home and their resources.

Finally, that gives us:

It’s understandable to worry that billionaires act like dragons. After all, a handful of them have a very large percentage of the world’s wealth. Meanwhile, many Americans are struggling to pay their medical bills and make their student loan payments. Some are even homeless. And many people around the world are indeed starving, as the viral tweet points out.

But let’s look more closely at what Jeff Bezos has and does, and see how many dragon qualities he actually has.

#1: Does Bezos have epic treasure? Well, yeah, he’s the richest man in the world, like we said. His net worth is about $108 billion. That would definitely buy enough bling to hike over.

So, is Bezos at least one-third dragon?

Not necessarily. There’s something crucially different between Smaug’s treasure and Bezos’s.

Smaug’s treasure is mostly made up of coins and luxury goods: jewelry, golden goblets, etc. In other words: money and goods for personal use (which economists call “consumption goods”).

Now, Bezos surely has plenty of cash and plenty of “lifestyle stuff”: 5 mansions, at least one private jet, etc. But 95 percent of his $108 billion treasure is made of… Amazon.

What does that even mean?

Well, those billions aren’t about money in the bank. They are the value of the big chunk of Amazon he owns.

And what is Amazon made of? Again, we’re not just talking about piles of money and luxury goods here. We’re talking about a business. For example, there’s the massive operation that takes the Amazon.com orders you and I make: warehouses full of computers processing oodles of data every day. Then there’s all it takes to fulfill those orders: facilities that cover acres, 100,000 electric delivery trucks, etc.

Those are the kinds of things that make up most of Bezos’s treasure: not stuff for personal use, but stuff that is made to make other stuff. Economists call such stuff “capital goods.”

That is a very different story from the dragon legends. We don’t usually picture dragons sitting on banks of servers and fleets of trucks.

So to be fair, we should make a revision:

Dragon Quality #1 (revised): Has epic treasure made mostly of money and personal goods.

And that’s definitely not Bezos.

What Amazon Is About

How about Dragon Quality #2? Does Bezos just “sleep” on his vast wealth? If that was his way, he couldn’t have built it up in the first place. Here’s a photo of his office in 1999:

If Bezos was a slacker, he couldn’t have built his business from a dinky desk and a spray-painted sign to the third most valuable company in the world. With a vast, complicated operation like Amazon, you can’t just coast and assume things will go well. Running a business like that is crazy-expensive. And his customers aren’t forced to buy from him. As CEO and part-owner, Bezos has to pay careful attention to the business and make lots of tough decisions, or things can go downhill fast. Big companies slide from the top into bankruptcy all the time. Just Google “Sears.”

Finally, does Jeff Bezos hog desperately-needed resources for his benefit alone? It’s true that the wood and glass that goes into his mansions can’t be used to house the homeless.

But remember, his treasure is mostly business resources. And it’s not like Bezos uses his forklifts to go for joy rides around his warehouses. The only way he can get any benefit from all those machines and buildings is by using them to deliver goods to customers. So his Amazon customers (310 million in 2016) benefit from his treasure, too. Think about how much you’ve appreciated seeing Amazon boxes at your doorstep and multiply that by 310 million.

Yes, he gets paid for those deliveries. But he reinvests most of that back in Amazon. Plus he shares a lot of it with his workers (647,500 as of the beginning of 2019, making Amazon the second-largest private employer in the United States), since he can’t put those capital goods to use without help.

So, hundreds of millions of customers and hundreds of thousands of workers benefit from the way Bezos puts his treasure to work. That’s not exactly “hoarding.”

What’s the takeaway? Of course Jeff Bezos is imperfect, just like everyone else. But he is no human dragon: no moral monster lazily hogging valuable resources for his benefit alone. He is an active producer carefully putting resources to work and creating value for hundreds of millions.

In other words, he is a successful entrepreneur. And that makes him more hero than monster.