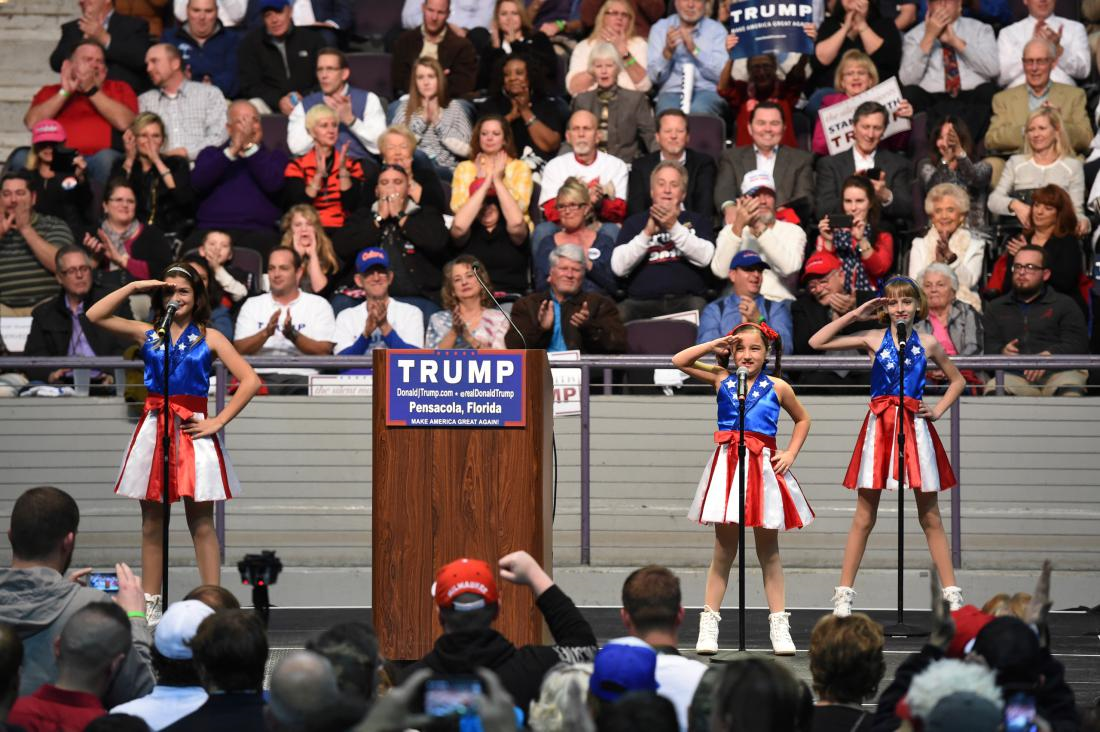 The USA Freedom Kids became an overnight sensation last week after performing at a Donald Trump rally in Pensacola, Florida on January 13th. The group of young girls, who have been dubbed everything from cheerleaders to the Trump Youth, sang and danced in front of a cheering crowd wearing matching red, white, and blue dresses.

Many in the media, on Twitter, and even on my Facebook wall compared the performance to Nazi and North Korean propaganda. However, there is one big difference between the USA Freedom Kids and the disturbing products of fascism they are being compared to: these young stars were not compelled by government force to sing in endorsement of Trump; rather, they took the job to boost their careers and make money. They’re young capitalists. And now, their song is being sold on iTunes and Amazon.

Still, most of the web doesn’t see that, and has been mocking the group since their videoed performance went viral.

“When you cast your vote, consider Jeb. Jeb is an option! …

Jeb’s dad was president, and his brother was too.

Now everybody hates him, how would that feel to you?”

Okay, it’s pretty funny. But if people have a problem with children singing about politics they (most likely) don’t understand, then Kimmel’s video is clearly only adding to the problem. However, I don’t think that’s what people are actually concerned about. It’s also pretty ironic to see Vanessa Hudgens, a child star herself, making fun of the young performers.

Not anywhere on the internet could I find a ‘way to go, girls!’ They did great; they deserve to be commended.  It takes a lot of talent to perform (especially at that age) in front of that many people, and their outfits are awesome. Very patriotic. Trumps cheerleaders? Alright. As a college cheerleader, I wish I looked that good.

Sure, there is plenty about Trump, his politics, and even the song lyrics to be concerned about. For example, it’s odd that Trump derides “enemies of freedom” while promoting policy which would cancel “any visas to foreign countries which will not accept their own criminals,” detain all undocumented immigrants until they can be returned to their home countries, and end birthright citizenship. It’s as if he doesn’t care about individual autonomy, government spending, or the Constitution. However, there is no reason to mock the young performers who excelled taking advantage of an opportunity (and who likely made a killing doing so).

Michael Moore Teases Trump for Being Afraid of Megyn Kelly