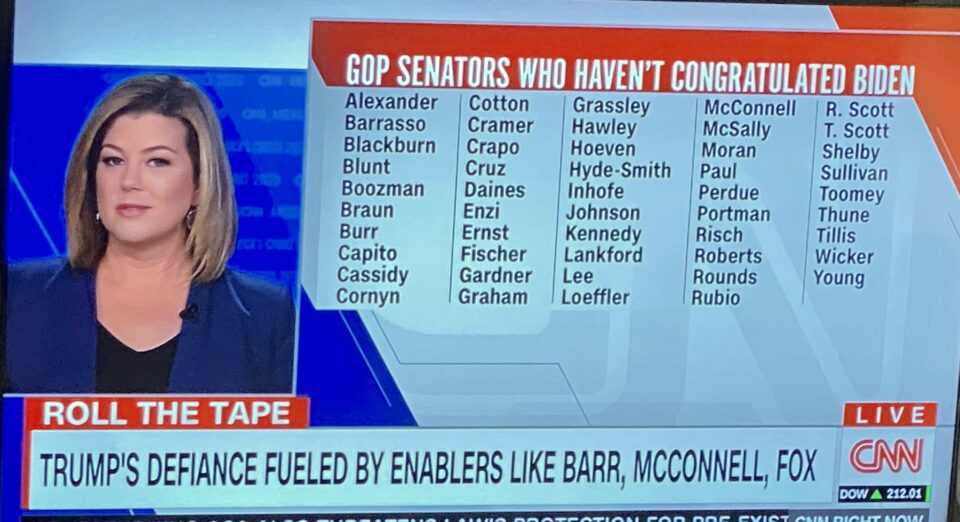 Several media figures and Democrats have called for lists to be made of President Donald Trump’s “sycophants” or supporters following the presidential election, suggesting that these lists will be used in the future to hold the president’s supporters accountable.

“Is anyone archiving these Trump sycophants for when they try to downplay or deny their complicity in the future,” Democratic New York Rep. Alexandria Cortez asked Friday, the day before media outlets called the presidential race for Biden. “I foresee decent probability of many deleted Tweets, writings, photos in the future.”

Ocasio-Cortez is not the only one asking for evidence of Trump supporter’s “complicity.” CNN’s Jake Tapper suggested that Trump and his followers should be careful of behaving in a way that might impact their future employment.

“I truly sympathize with those dealing with losing — it’s not easy — but at a certain point one has to think not only about what’s best for the nation (peaceful transfer of power) but how any future employers might see your character defined during adversity,” Tapper said.

Washington Post columnist Jennifer Rubin also warned that Republicans “now promoting rejection of an election or calling to not to follow the will of voters or making baseless allegations of fraud should never serve in office, join a corporate board, find a faculty position or be accepted into ‘polite’ society.”

Journalist Glen Greenwald predicted before the election that rather than settle the nation’s divisiveness, a Biden presidency would spur the media to target Trump supporters. The Intercept co-funder emphasized that several highly successful media companies found their place during Trump’s presidency based on dramatized fear narratives — and that these media companies must find a way to keep this fear narrative alive or face cancelled subscriptions.

“They’re going to continue to say, [if] not maybe Trump, at least his movement, still pose this existential threat,” Greenwald said during an October podcast with Joe Rogan.

“So many institutions are profiting — I don’t just mean financially, in terms of power and control — from elevating fear levels over right-wing fascism, over white supremacists, domestic terrorism, whatever you want to call it,” the journalist said.

“The same exact thing is happening now, which is: people in media have had their careers saved. I know cable hosts who were on the verge of being fired because nobody was fucking listening to their dumb shows in 2007 and 2008, when all they were doing was talking about how great Obama was, because who wants to listen to that?”

Greenwald’s predictions may have been fulfilled in part. Days after Election Day, former Obama spokesman Hari Sevugan highlighted the start of a “Trump Accountability Project” intended to “make sure anyone who took a paycheck to help Trump undermine America is held responsible for what they did.”

Sevugan, who also served as national press secretary for the Democratic National Committee and as deputy campaign manager for former presidential candidate Pete Buttigieg, tweeted Friday that White House staff had begun looking for jobs, adding, “Employers considering them should know there are consequences for hiring anyone who helped Trump attack American values. Find out how at the Trump Accountability Project.”

.@kaitlancollins just reported WH staff are starting to look for jobs. Employers considering them should know there are consequences for hiring anyone who helped Trump attack American values. Find out how at the Trump Accountability Project.https://t.co/7z4tDKsSQb

“We must never forget those who furthered the Trump agenda,” the Trump Accountability Project website says. “We should welcome in our fellow Americans with whom we differ politically. But those who took a paycheck from the Trump Administration should not profit from their efforts to tear our democracy apart.”

The progressive Lincoln Project has repeatedly used it’s Twitter platform to target those affiliated with President Trump. On Tuesday, after multiple inquiries from the Daily Caller News Foundation, a Twitter spokesman told the DCNF that the Lincoln Project’s Twitter account would be locked until it deleted a tweet doxxing two Trump lawyers.

“Here are two attorneys attempting to help Trump overturn the will of the Pennsylvanian people,” the Lincoln Project tweeted with a picture of attorneys Carolyn McGee and Ronald Hicks. The tweet, which included the attorneys’ phone numbers and emails, added, “Make them famous,” with a skull and crossbones emoji.

Conservative figures on social media reacted strongly to the suggestion of making lists.

“While you’re a terrible person for doing this, Democrats putting Trump supporters and Republicans on lists is a great issue for us to campaign on in Georgia, so thanks,” NRSC Senior Advisor Matt Whitlock told Sevugan Friday in a tweet regarding the Trump Accountability Project. “Keep up the great work.”

“The list making at @CNN has begun,” warned radio host Chris Stigall in a Tuesday tweet above a screenshot of CNN. The photograph shows a long list of “GOP Senators Who Haven’t Congratulated Biden” above the caption, “Trump’s Defiance Fueled By Enablers Like Barr, McConnell, Fox.”

“To some insiders, the attacks have emboldened their campaign to find examples of ballot and voting fraud,” wrote the Washington Examiner’s Paul Bedard. “Still, it is true that for many inside the administration, finding a job will be difficult, no matter what. There are about 4,000 administration-related jobs, and those will go to Biden. While there are a few new Republican congressional members, it isn’t enough to absorb all those positions.”