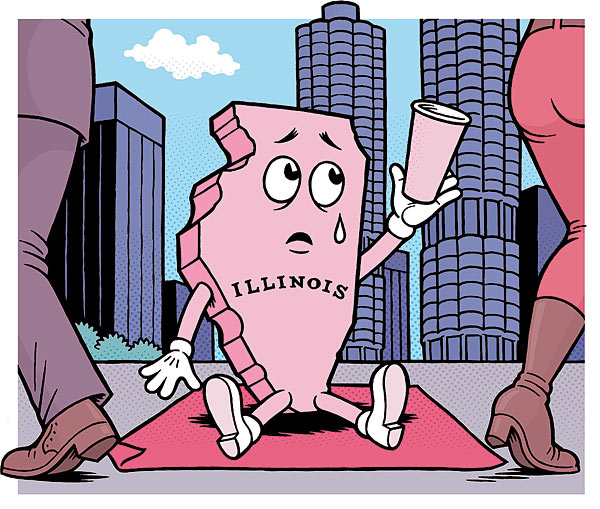 Illinois is on the cusp of becoming the nation’s first state to carry a “junk” bond rating, as Springfield’s unprecedented budget impasse stretches into its third year.

Ratings agency S&P Global recently warned Illinois that it will likely lose its investment-grade rating if Republican Gov. Bruce Rauner and state Democrats can’t scrape together a spending plan by midnight Friday. Illinois has been operating without a budget since 2015, accumulating $6 billion in additional debt over the past year alone, reports Bloomberg.

A junk rating would exacerbate Illinois’ enormous debt problem, which is already one of the worst of any state after decades of fiscal mismanagement.

“If they miss this window, then they drop off a big cliff,” Richard Ciccarone, the Chicago-based president of Merritt Research Services LLC, told Bloomberg. “They would jeopardize their ability to maintain the services of the government, throwing it into serious crisis, and that provides a justification for a downgrade below investment grade.”

Illinois hasn’t approved a full-year budget in the past two fiscal years, operating instead on a series of continuing resolutions while Rauner and his Democratic foes wrangle over the state’s legislative agenda. State House Speaker Michael Madigan has refused to budge on Rauner’s policy wish list, which includes a property tax freeze, reforms to the state’s workers’ compensation system, and term limits on elected officials.

Amid the stalemate, Illinois’ fiscal condition has continued to worsen. Springfield now owes nearly $15 billion in unpaid bills and faces a massive unfunded pension liability estimated at $150 billion. The debt burden is so heavy that interest on pension debt alone costs about $9 billion each year, according to the Illinois Policy Institute.

If Illinois is downgraded to junk status, many institutional investors and mutual funds would be prevented from buying the state’s bonds, and borrowing costs would climb even higher. Yields on Illinois 10-year bonds now stand at 4.8 percent, the highest of any of the 22 states that Bloomberg tracks.

“If we don’t have a budget deal in place by midnight on June 30, it is almost a guaranteed certainty, because the credit-rating agencies have already said as much, they will downgrade us into junk-bond territory, and then good luck trying to climb out of that,” state comptroller Susana Mendoza told reporters in Springfield Thursday. “People need to understand this is really happening.”

This War of Mine Smashes The ‘Excitement’ Of Anarchy