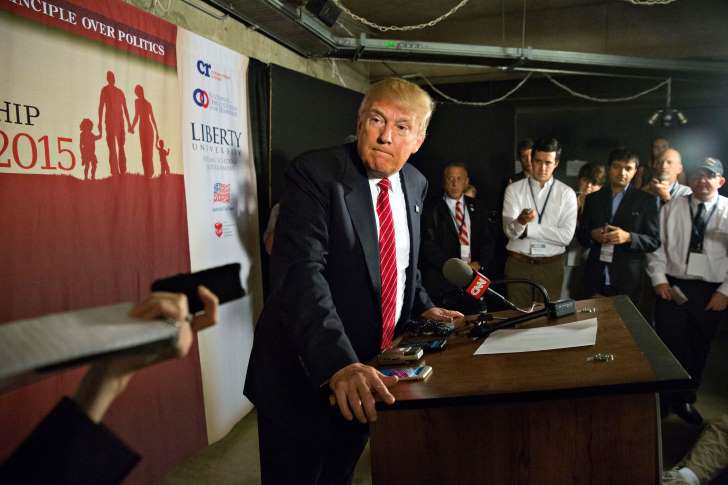 Donald Trump’s brutal honesty has been accused of going too far in the past. Still, his status as a successful real-estate mogul, reality TV show celebrity, and political outsider who many believe is capable of becoming POTUS, appears to have crossed a line with his mostly conservative supporters (who usually relish in his candor).

Trump took an opportunity to shoot back at Arizona Senator John McCain, who called Trump supporters who came to a recent Arizona rally, “crazies”. This insult to his supporters inspired anger in Trump, who then made a statement attacking whether or not the former Vietnam POW and 2008 GOP Presidential candidate, could be considered an actual war hero.

McCain, a twenty plus year career senator may only have a 30% approval rating from his state of Arizona, and 55% disapproval from the GOP overall, yet many individuals are disgusted over Trump’s accusation that because McCain was simply a POW during the Vietnam War, he does not warrant the title of actually being a war hero. Most of the GOP presidential contenders jumped in moments after Trump’s attack on McCain’s military service.

Sen. Marco Rubio of Florida had this to say:

“This is not just an insult to John McCain, who clearly is a war hero and a great man, but it’s an insult to all POWs, to all men and women who have served us in uniform, who have been captured in battle,” Rubio said. “And this somehow makes the assumption that somehow, if you are captured in battle you’re less worthy of honors than someone who isn’t. It’s not just absurd. It’s offensive. It’s ridiculous, and I do think it is a disqualifier as commander-in-chief.”

Vocal Trump adversary Gov. Jeb Bush jumped on the opportunity to pitch in his five cents worth on his personal Twitter account:

Enough with the slanderous attacks. @SenJohnMcCain and all our veterans – particularly POWs have earned our respect and admiration.

Along with other GOP candidates such as Gov. Bobby Jindal, Sen. Lindsey Graham, and Gov. Rick Perry, the only contender to appear as sympathetic to the mogul was Sen. Ted Cruz of Texas, who defended McCain’s service while remaining silent on Trump’s statements.

This move caused some pundits to consider that Cruz may have possibly been not as offended by Trump’s statements. Cruz reiterated his refusal to feed the media’s appetite for Republican on Republican fighting amongst the 2016 candidates getting ready for the primaries. This move by Ted Cruz however may have won some Republican voters over to the Cruz camp for his poise in dealing with the matter, since Cruz and McCain have had an aggressively hostile relationship since McCain referred to the freshman senator as a “whacko bird”, when McCain insulted Cruz publicly throughout the Senate chamber to other GOP peers (McCain also showed hostilities to Senators Rand Paul and Mike Lee, philosophical and political allies of Cruz).

Trump did receive some support from the veterans community, like Joel Arends, chairman of Veterans for a Strong America, who said the comments “has nothing to do with Mr. Trump’s high regard for the military or veterans as a whole. Mr. Trump is supporter of the U.S. military and of America’s veterans. It is well known that when Mr. Trump is attacked by a detractor, he swings back.”

Trump has made it clear that he believes he is a champion of veterans; on his presidential campaign page he currently has an entire paragraph dedicated to one story in particular:

Mr. Trump has long been a devoted supporter of veteran causes. In 1995, the fiftieth anniversary of World War II, only 100 spectators watched New York City’s Veteran Day Parade. It was an insult to all veterans. Approached by Mayor Rudy Giuliani and the chief of New York City’s FBI office, Mr. Trump agreed to lead as Grand Marshall a second parade later that year. Mr. Trump made a $1 million matching donation to finance the Nation’s Day Parade. On Saturday, November 11th, over 1.4 million watched as Mr. Trump marched down Fifth Avenue with more than 25,000 veterans, some dressed in their vintage uniforms. A month later, Mr. Trump was honored in the Pentagon during a lunch with the Secretary of Defense and the entire Joint Chiefs of Staff.

He also took the opportunity from all the attention surrounding this incident to further elaborate on his animosity towards McCain, when his campaign staff released this statement regarding McCain’s lack of efforts to help with veteran’s causes:

“I am not a fan John McCain because he has done so little for our veterans, and he should know better than anybody what the veterans need, especially in regards to the (Department of Veterans Affairs),” Trump said in the statement. “He is yet another all-talk, no-action politician who spends too much time on television and not enough time doing his job and helping the vets. He is also allowing our military to decrease substantially in size and strength, something which should never be allowed to happen.”

While McCain has championed charities and other projects to help provide aid and assistance to military veterans, his voting record has often been spotty* at times in regards to bills aimed at veterans:

Where in the world was Trump when McCain was serving?

Many have jumped in to shed light on the terror and sacrifice endured by John McCain during his time in Vietnam, including conservative contributor Rick Robinson from Rare.com in his recent article:

In 1967, Lt. Commander McCain was on board the aircraft carrier USS Forrestal when an electrical malfunction caused a deadly fire. While assisting another pilot’s escape from the deck, a bomb exploded. McCain was hit with fragments in the chest and legs.

A year later, as a part of Operation Rolling Thunder, John McCain was shot down over North Vietnam during his 23rd bombing mission. When he ejected from the plane, he broke both arms and a leg. Locals crushed his shoulder with the butt of a rifle and stabbed him with a bayonet, before sending him to the prison known as the Hanoi Hilton. 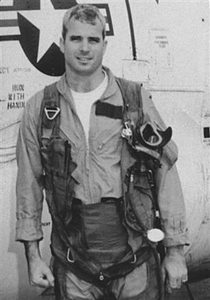 I’ve never been to a Trump resort to enjoy their room service, but I’m guessing the service is a bit nicer than the treatment McCain received at the Hanoi Hilton.

McCain has time and time again written extensively about his time in captivity, spawning a biopic and several documentaries detailing the struggle for survival he had dealt with.

In the aftermath of Trump’s statements about McCain, reporters and journalist began to question how Donald Trump was able to avoid the draft in Vietnam;  As one site was recently able to discover about Trump’s dodge of the draft:

The son of a wealthy real estate developer, Trump received four student deferments that were followed by a 1968 medical deferment that came a few months after he graduated from the University of Pennsylvania’s Wharton School.

After denigrating McCain during remarks today at the Family Leadership Summit in Ames, Iowa, Trump faced reporters’s questions about his lack of service. Asked about the last of his five deferments, Trump said that his disqualifying medical condition was a bone spur in one of his feet (he could not remember which one).

What it all comes down to…

One GOP candidate did not receive much attention when commenting on the Trump/McCain matter, that being the popular conservative Dr. Ben Carson:

“It depends on your definition of a war hero. I think he has done some wonderful things, certainly the history is consistent with what we would consider a war hero…So do we take that away from him because some people disagree with him politically? I think that’s probably a stupid way to do things.”

The comments made by Trump were unwarranted and insulting, not simply to McCain but to all men and women serving in the US Military who have sacrificed their relative safety and well being for the service of their nation.

John McCain’s record is far from pretty, and though he may not be a friend to either civil libertarians or Tea Party conservatives, to target a man’s faults and ill decisions is one thing, but to then attempt to soil heroic acts of bravery simply to earn political points is simply weak on any count.