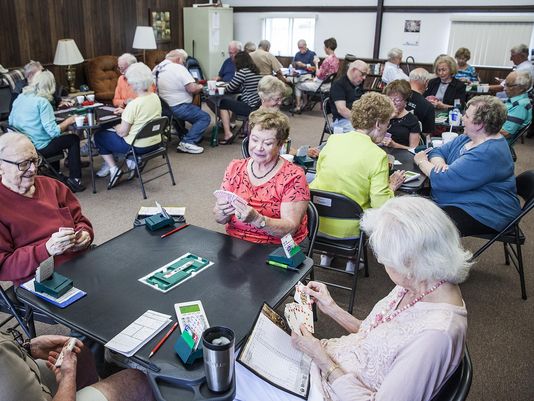 In Muncie, Indiana, a group of senior citizens is being targeted by the state for their illegal game of euchre.

One group of about 50 seniors at the Delaware county Senior Citizens Center gets together weekly to play a card game called euchre, calling it “Vegas on West Eighth Street.” Players pay a couple bucks to participate and win prizes like packs of cookies or rolls of toilet paper, but since gambling is illegal in Indiana, the state has ordered that their games come to an end.

“Someone called (the state) and was concerned,” said Judy Elton, director of the senior center. “If you pay to play and win prizes, that’s considered gambling. We thought that only applied to cash prizes. These people only win a pack of toilet paper or a can of peaches.”

So then last week, the Indiana Gaming Commission contacted officials of the senior center and told them the illegal activities must stop.

Players each pay $2.50 to play, one dollar is paid to the center and the rest is collected to purchase future prizes.

“The euchre club gives us a part of what they take in,” Elton said. “That’s usually about $30 for a three-hour session.We’re not talking about a great deal of money here.”

The executive director of the gaming commission in Indiana, Sara Tait, disregarded initial questions from The Star Press and said, “Our general practice is not to provide substantive comments for stories.”

“The gaming commission received a complaint and contacted the center to educate them on the law,” Tait said.

Elton said she and the members of the senior center’s board are concerned about the loss of revenue, despite it being a small amount, if the seniors decide to continue to play without paying.

“We’re doing everything we can to comply,” Elton said. “We’re not trying to step on anybody’s toes.”

A member of the Vegas on West Eighth Street group, Wilson, says he doesn’t see what’s wrong with the game.

“We play five games and we have snacks, then play five more games,” Wilson said. “Whoever has the high score gets to come up and pick a prize. We use the money to buy the prizes with and we buy sympathy cards or go out to dinner if there’s money left. We all get our money back.”

But dadgummit if the state doesn’t like it, you can’t have it.

Betting On Politics: A Game of Skill or Chance?