–  Families across the United States are refraining from their usual daily routines of school, sports, play dates, and extra-curricular activities.

–  Former”latch key” kids offer wisdom on how to entertain yourself during the coronavirus quarantine.

As the United States grapples with social distancing and stay-at-home orders, a generation of “latch-key” kids offer wisdom on how they entertained themselves in the days before Netflix, social media, and cell phones.

Families across the country are refraining from their usual daily routines of school, sports, play dates, and extra-curricular activities as President Donald Trump and the White House coronavirus task force encourage U.S. citizens to stay home whenever possible.

Gen Xers share how they entertained themselves growing up, and suggest that children can play outside, play card or board games, talk on the phone, and more.

“The Gen X Code” author Geoff Woliner highlights his generation’s approach to the coronavirus in a new book in order to “help everyone channel some Gen X pragmatism and perspective as a way to keep their cool and manage their anxiety during this crisis.”

“Over the last month,” he told the Daily Caller News Foundation, “I’d noticed two camps starting to form in the reaction to this virus, those who were panicked and spreading the doomsday alarm as loudly as they could, and those who had a more matter-of-fact, ‘This sucks, but we’ll get through it’ approach.”

“Almost uniformly, the ones in the practical, latter camp were Gen Xers,” he added.

What Did Latch Key Kids Do To Entertain Themselves?

Woliner grew up as a latch key kid in Queens, New York where he jokes that he and his friends formed their own “United Nations after-school, peer-babysitting service.”

“It was myself, my brother, the Taiwanese kids, the Jamaican kids, the Russian kids, the Haitian kids and the Israeli kids all getting each other into progressively more and more trouble,” he said. “We proved that a lack of discipline and burning desire for mischief was truly universal.”

Woliner would eat microwave pizza, binge “on more than our share of Doritos,” play video games, hold “impromptu wrestling matches,” and made lots of home movies “to act out different characters.’

“We even dabbled in adult themes like homelessness, childhood cancer and international espionage,” he said. “It’s really amazing what creativity gets ginned up when you’re stuck in the house because of a snowstorm.”

Susan Mueller, a 53-year-old former dietician, says she “most definitely” was a latchkey kid.

“My parents divorced when my sister and I were young and were raised by our Mother,” she told the DCNF. “Back then, child support payments were not as generous as they seem today, so my Mom had to work.”

Mueller says she and her sister were “always outside, even when it was minus 20 and a pile of snow everywhere.”

“We were always either biking, roller-skating, making go-carts with neighborhood kids etc,” she said. When they were stuck in the house, Mueller and her sister would read, listen and dance to music, watch TV, play cards or board games with each other and their friends, and write letters to penpals.

“I also loved old black and white movies, and on Saturdays and Sundays, there was this program called Saturday and Sunday matinee, and they’d play all these old movies. Cary Grant, Bing Crosby, Spencer Tracy…you name it. Movies like Gone with the Wind, Gigi, My Fair Lady, Breakfast at Tiffanies…as I’m typing you, I’m getting flooded back with good memories,” she said. “It was a Zenith TV and you had to physically get up to turn the channel.”

40-year-old former latch key kid Thomas Williams, who is a soldier in the Texas Army National Guard and also works as a full time police officer, said he never stayed inside if he could help it as a child.

“I stayed outside all the time if I wasn’t in school,” Williams told the DCNF. “In the summers my sister and I were left with a chore list the filed up two pages of a yellow legal pad. Some were individual and some were joint chores. It forced us to work together and figure things out as there were no instructions.”

Williams says he played baseball “more than the kids from The Sandlot,” adding, “If there’s something a typical farm boy from Texas would do, I did it.”

His parents let him and his siblings make anything they wanted for breakfast and lunch, and he usually had cereal for breakfast and sandwiches and chips for lunch during the school year. William’s family always ate dinner as a family.

“During the summer it was cereal for breakfast, usually forget to eat lunch because I was busy playing outside or just running into the house to get an oatmeal cookie or other snack and then right back out,” he said.

51-year-old Kevin Whisman doesn’t consider himself a “true” latchkey kid, since his mother worked part time while his father worked in a Steubenville, Ohio steel mill. Whisman said he was allowed to “go both in and outside when both parents were out.”

“The neighborhood was pretty tight so we all kind of watched out for each other,” he said. For meals, he ate lots of snacks, lunch meat, and hot dogs.

Whisman said that that to entertain himself all day, he played outside: biking, playing football and baseball, and more. Inside, he would do “lots of reading” and listen to records, tapes, and the radio. He would also play with erector sets and matchbox cars.

“By the army 80’s I started getting into computers,” he adds.

Chief cooperating officer at the Conservative Partnership Institute, 42-year-old Wesley Denton, says that he would use his free time to play outside with his brothers. If he were stuck inside, he would play Atari, Commodore 64, play with transformer or GI Joe toys, play board games, or watch VHS movies.

“My mom stayed at home for most of my childhood, which was awesome,” he said. “She eventually owned a restaurant with my grandmother and then started a real estate career, so probably would fall somewhere in the “latchkey” world during middle/high school years.”

Denton says he spent most of his time outside.

“Mostly just went outside and found something to do with brothers or neighborhood friends,” Denton said. “We had a marsh and creek behind our house where we’d fish or build rafts or general mischief. Build forts in the woods across the street, play sports in someones yard, or ride bikes to the local pantry gas station for candy and baseball cards.”

“And of course with so many boys, we entertained ourselves with fighting a good bit of the time, just a few scars and ER trips along the way,” he adds.

After a friend challenged him to create a COVID-19 pandemic album, Denton created the Spotify playlist “Smile,” full of “pandemic/quarantine related” songs, such as the Beatles’ “Here Comes the Sun” and Sam Cooke’s “What A Wonderful World.”

“I was feeling nostalgic being at home so much, so I just limited this to my Gen Xer memories mostly from the 70s/80s/90s,” he wrote in a Facebook post. “Which explains the album cover with me and 3 of my brothers playing Atari at home.”

“You may notice a cover photo of 4 kids playing Atari, I’m the baby on the right with 3 of my brothers,” he told the DCNF. 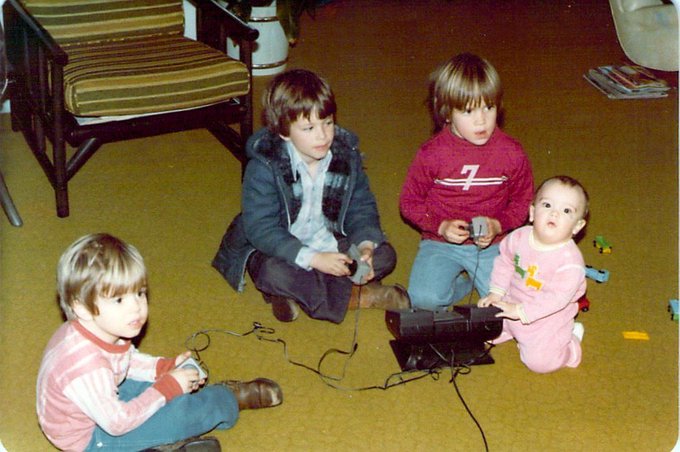 “My brother Ray in the blue jacket passed away after years of fighting leukemia, not too long after that was taken, he was 8 and I was about a year old. My brother Matt, in red shirt in the photo, was killed by a drunk driver in 2012 at age 40. My brother Andy is on the far left of the photo, and my baby brother Noah was born a couple years after that photo was taken.”

Gen X Offers Advice To Those Stuck At Home

These Gen X folks also have plenty of advice for the those stuck in their homes weathering out the coronavirus pandemic. Denton suggests family walks, chores, and more.

“I’ve got four kids (elementary to high school) and my amazing wife keeps them pretty busy with schoolwork, chores, exercise and free time to play outside,” Denton said. “We try to take family walks most days. Lots of yard work, basketball, board games and movies on the weekends.”

Williams says that the number one thing people should be doing is reading.

“After that I’d say just go outside,” he says. “Find an outside hobby that combines being outside with some form of exercise and learning. Examples being, fossil hunting, bird watching, gardening, geocaching or dozens of other things.”

These periods of quiet time and isolation provide a great opportunity for people to get to know themselves, Muller says. The former dietician said that her husband is currently working from home and her kids are also home doing virtual school — and that she is “loving it.”

“I’ve got a great family and bloody hell are they funny,” she said.

“I don’t think people know themselves, if that makes sense,” Mueller adds. “You have to like being in your own company…I think that’s why so many people are having a hard time being stuck at home away from others.”

Woliner suggests focusing on the people around you.

“They’re more interesting than you probably give them credit for,” he says. “Ask them questions about the strangest stories and characters they’ve ever experienced/been around. Then take it on a ride. Imagine if that character did x, y, z…how would that end up? And let your imagination run wild.”

“We’re so used to consuming the creativity of others these days that we’ve lost the art of making it on our own,” he adds. “We’re all a lot weirder than we realize, which in times like these, can be a great thing.” 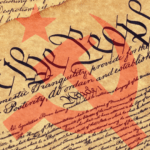 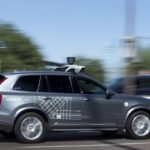 What do you need to know about vehicle warranties?