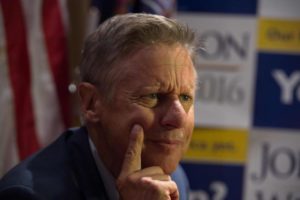 Libertarian candidate for President, Gov. Gary Johnson has been dragged through the mud recently by major media outlets for his supposed “gaffes” on foreign policy.

First on his suggested list of “gaffes” was Johnson’s appearance on MSNBC’s Morning Joe when he was posed with a “gotcha” question posed by panelist Michael Barnicle. With no previous conversation on foreign policy or even a hint that the discussion was moving to it, Barnicle blindly asked Johnson the in-depth question, “What would you do about Aleppo?” To which Johnson responded confusedly.

Second on the list was Johnson’s again supposed inability to answer a question. Set forth by MSNBC’s host of Hardball Chris Matthews, the question asked to Johnson was, “Who is your favorite foreign leader?” Again, Johnson was slightly confused by the question, and unable to quickly respond to the inquisition. And again, the media ate this up to publicly shame the former governor for his “apparent lack of foreign policy or relations.” The media loves to completely ignore the fact that most world leaders hold a view of government that is diametrically opposed to Johnson’s view of limited government, which would make it nearly impossible to find someone in world leadership who he would “admire.”

Finally on the list was a statement that Johnson made on MSNBC with host Andrea Mitchell. Johnson, in defending himself from the previous two comments made, told Mitchell that:

You know what? The fact that somebody can dot the i’s and cross the t’s on a foreign leader’s geographic location then allows them to put our military in harm’s way…Five days after the interview Andrea, I still can’t think of a world leader that I respect. I mean, having never been involved in politics before, I will tell you I held a lot of people in this country on pedestals thinking they were role models. I got to meet them up front and personal and found out they were empty suits. They weren’t about issues. They weren’t about doing what was best. They were about getting re-elected. . . .We put our military in this horrible situation where we go in and support regime change. They get involved in civil wars where hundreds of thousands of innocent people are in a cross fire. We’re literally shooting at ourselves because we support both sides of conflicts, Syria as an example. We wonder why our men in service and women suffer from PTSD in the first place. It’s because we elect people who can dot the i’s and cross the t’s on these names and geographic locations as opposed to the underlying philosophy which is ‘let’s stop getting involved in these regime changes.’ . . .You should have a working knowledge of what is going on, and what is going on are politicians that beat their chests, that claim to know about what we should be doing. And because you put them forward as being knowledgeable, that we then put our trust and faith in politicians that put our men and women, service men and women, in harm’s way. They’re getting killed. They’re getting maimed. They’re getting injured. They’re getting psychologically damaged for the rest of their lives.

Now the media may see his honest and supposed “gaffes” as horrid offenses which could never be committed by a presidential candidate, however even with his “flaws,” Gov. Johnson’s foreign policy is still light years ahead of his political opponents.

Johnson, even with his missteps, is still the only voice for a sane foreign policy that is on all 50 state ballots. In fact, Republican Donald Trump and Democrat Hillary Clinton share a very “more of the same” approach to their foreign policy, as they both believe in interventionism and aggression around the world. Meanwhile, Johnson believes in a strong and fiscally responsible military which will unleash the full force of its might if the nation is threatened.

Trump and Clinton agree with having our troops occupy land in foreign nations, as well as funding both sides of every conflict (as Johnson pointed out in his interview with Mitchell) are necessary to military strength. Beyond that, they both believe in foreign aid to nations with which we may have serious ideological differences. Johnson on the other hand believes that we need to bring our troops home from abroad. He believes that as a nation, we tie our hands by offering foreign aid to countries who would actively fight against us, especially when as a nation we already have a budget deficit and spending problem.

The greatest importance that should be taken from this honest and human conversation about foreign policy is the fact that Johnson is the only one of the 3 candidates who sees our troops as people first and a military tool second. Trump and Clinton talk a good game in terms of respecting the troops, but the truth is that both would not hesitate to send our mothers, fathers, brothers, sisters, sons and daughters to war for things we have no business being involved in, such as the Syrian Civil War, Libya, or even Iraq and Afghanistan. This is not to suggest that Johnson does not understand that war is a terrible necessity when under attack or under immediate threat or even that he is too naive to think that it is never an option. It should simply suggest that he is the only candidate of the three who will look at the faces he sends to war, and fully understand that their involvement is one hundred percent necessary to solve the conflict.

The next time that there is a serious contention on foreign policy, do not let the media drive your narrative. Instead, ask yourself: if elected to be the next commander-in-chief, who will look at foreign policy with honesty, humanity and have the right people around him to decide if our troops and our nation need to be involved?

If you still are unsure about your answer… maybe you should look at who the troops support most. According to the Military Times:

Among the entire military force, Trump leads Johnson 37.6 percent to 36.5 percent, within the study’s 2 percent margin of error. Democratic presidential nominee Hillary Clinton trails as a distant third-place choice, with only 16.3 percent of troops’ support.

Colorado Mandates Labels to Protect Kids from Weed, But Not Booze