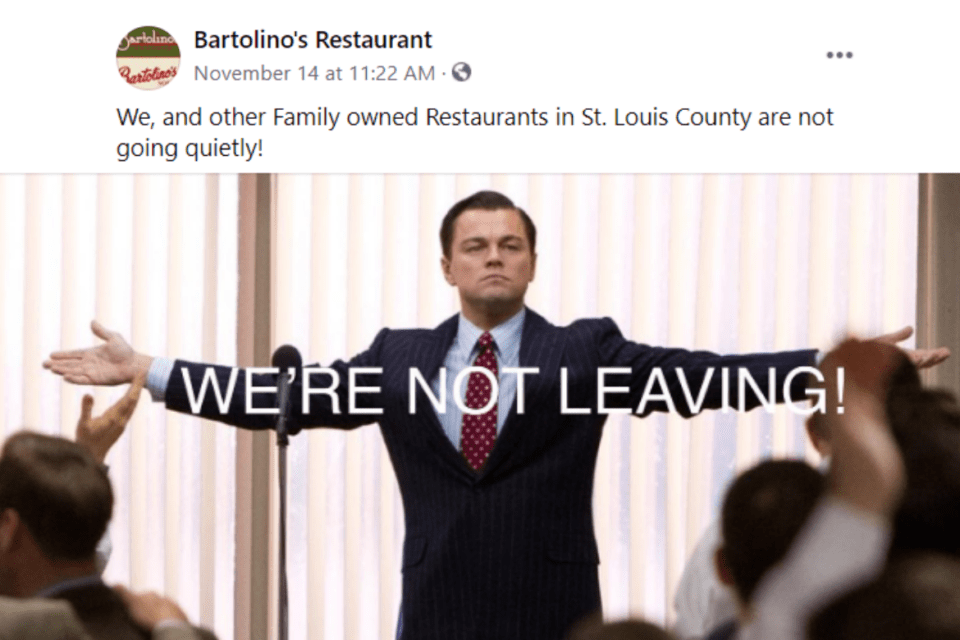 On Friday, newly re-elected St. Louis County Executive Sam Page announced some of the most severe restrictions, yet, on St. Louis County residents and businesses in response to the rise in coronavirus cases. Once again, restaurants are among the businesses most impacted. As of Tuesday, restaurants are not allowed to open their dining rooms, and outdoor dining is restricted to 25% capacity.

This time, however, the restaurants are fighting back.

The coronavirus pandemic has been an unpredictable rollercoaster for restaurants in STL County. When the first mandatory stay-at-home order was issued in late March, many scrambled to adapt by adding or increasing curbside carryout options. By mid-May, indoor dining was allowed at 25% capacity, and then increased to 50% in June. Between the end of July and October, dining capacity allowances vacillated between 25% and 50%—until the most recent closure order taking effect this week. Except this time, there is no expanded unemployment option for employees, and no Paycheck Protection Program loans for businesses.

On Saturday, Bartolino’s Restaurant announced on social media their intent to join other restaurants in a suit against County Executive Sam Page.

We, and other Family owned Restaurants in St. Louis County are not going quietly You have been there for us, we are going to be there for you! Sam Page’s overreach with the arbitrary closure of indoor dining for county restaurants and bars is irresponsible.

The final weeks of the year are consistently one of the most important times of the year for restaurant employees. Our employees are FAMILY, and Sam Page took a direct uppercut towards their livelihood. We have partnered with other local county restaurants to file a lawsuit against Sam Page, and plan to REMAIN OPEN for SAFE Indoor Dining.

Amid a public outpouring of support, many restaurants have stated they will remain open 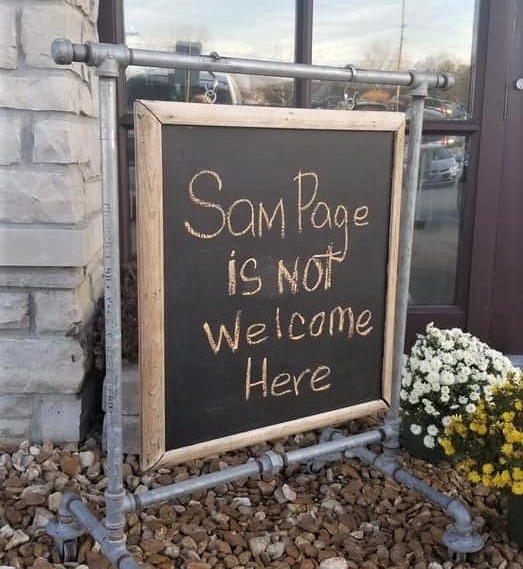 in defiance of Page’s closure order. It is unclear how the county intends to handle violations of the order. The St. Louis Post-Dispatch reported that St. Louis County Prosecuting Attorney Wesley Bell stated violations of the health order would be handled on a “case by case” basis and that they would not “tolerate irresponsible behavior” in putting people at risk. Restaurant owners report they have a longstanding good relationship with St. Louis County law enforcement, and do not expect they will interfere with any restaurants who choose to remain open.

Benjamin Brown, owner of Satchmo’s Bar & Grill in Chesterfield, has been active in advocating for dining establishments during the course of the pandemic. In April, he and another restaurant owner successfully lobbied for a suspension of a law prohibiting restaurants from selling sealed curbside cocktails. It is no surprise that he is among those leading the way this time as well.

Mr. Brown expanded on this in the following statement to The Libertarian Republic:

“The fact that an organization like this is willing to get involved so directly only highlights the ludicrous and arbitrary nature of these restrictions. I believe that is pretty clear to anyone that has been closely following the county’s covid response and the information they have been providing to the public.

How you can you believe this is really about saving lives when: 1) 50% of the new hospitalizations in St. Louis are coming from places outside of the county, 2) they state that most of the new spread is coming from small gatherings in homes, and 3) Dr. Garza of the St. Louis county covid taskforce recently stated publicly that, “Even if we did shutdown restaurants and bars, I don’t know how much of an impact that would have on transmission, because there is so much now out in the community,”.

I understand the pressure felt by a politician to “act” during trying times. However, it’s clear from the very information they’ve presented to the public, that restaurants in St. Louis County are NOT one of the major drivers of increased transmission of the virus nor the increase in hospitalizations. Our restaurants are being used as a scapegoat. A convenient target for a county executive lacking the power to to change human behavior in places where they claim the higher rates of transmission are actually occurring.”

Neil Struharik, owner of Tucker’s Place steakhouses, spoke with Austin Petersen on the KWOS Morning Show about his frustration with Sam Page’s handling of the coronavirus pandemic, and the lawsuit being brought in response to the latest mandatory closure orders. Struharik talked about the hundreds of restaurants and distributors getting involved in the pushback against Page. He stated the St. Louis County Executive has been stricter on St. Louis County than any other region in Missouri, and that he is specifically targeting and bullying restaurants in the midst of the holiday season—one of the most important times of the year for restaurant employees. Struharik also pointed out that, in spite of being the most restrictive, St. Louis County has one of the worst records for coronavirus cases and that Sam Page is looking for a scapegoat.

Later in the day, Struharik told The Libertarian Republic that he had spoken with attorneys for the pending suit, and that a “complaint from 40 local restaurants with a restraining order” would be filed Tuesday. It is expected to be in front of a judge by the end of the week. He went on to say that the number of restaurants joining the lawsuit is expected to increase dramatically by the end of the week.

Ultimately, the Tucker’s Place owner said everything they are doing is for their people. 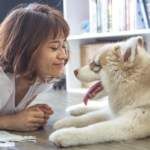 How To Choose The Right Dog Breed For your Lifestyle 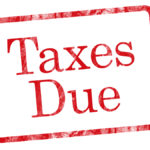 What You Need To Know About Calculating Tax on Bonus Payments