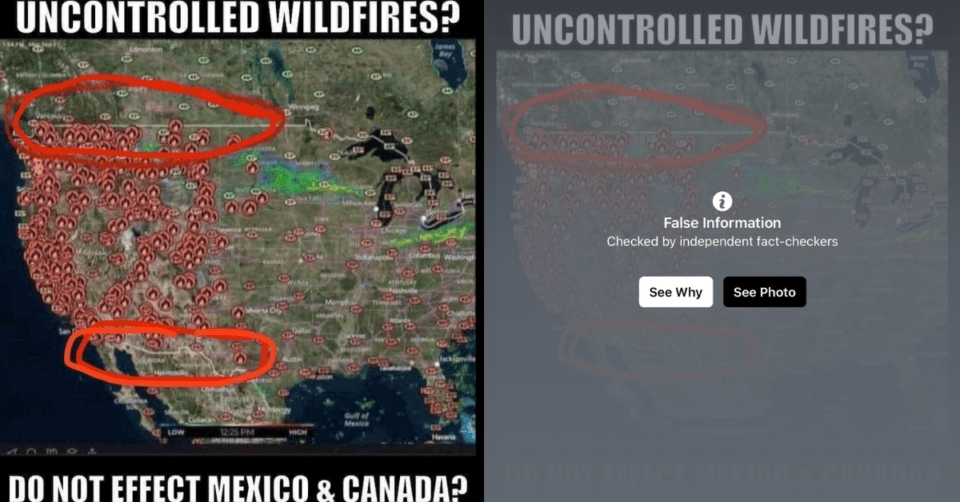 An image shared on Facebook claims a map shows that wildfires stop at the U.S.’s borders with Canada and Mexico.

The map only appears to show U.S. wildfire data. Both Canada and Mexico are also experiencing wildfires, according to NASA’s fire map.

The post shows a map of the U.S. with dozens of red fire icons scattered across the western half of the country. Two red circles have been drawn on the map, one around the western section of the U.S.-Canada border and the other around the U.S.-Mexico border.

Social media users shared the image amid wildfires raging along the West Coast, burning millions of acres and killing at least 35 people, according to CBS News. The caption appears to suggest that the wildfires stop at the U.S.’s borders with Canada and Mexico, saying, “Uncontrolled Fires? Do Not Effect (sic) Mexico & Canada?”

However, the map only shows fires in the U.S. because it is based solely on American data, according to climate scientist Katharine Hayhoe.

“The latest disinformation circling the twittersphere asks why the impacts of climate change appear to stop at the Canadian border,” said Hayhoe in a tweet addressing the same map shared in the Facebook post. “The answer is simple: because US maps only show US data.”

Despite the Facebook post’s claims, wildfires are burning in Canada. A report published by the country’s natural resources department states that “Canada has had 3,621 fires and a total of about 235,124 hectares burned” as of Sept. 9. Peter Englefield, a physical sciences officer at Canada’s Northern Forestry Centre, said in an email to the Daily Caller News Foundation that there are currently 30 wildfires burning across Canada, including eight in British Columbia that are uncontrolled, as of Sept. 17.

A fire map operated by NASA shows some of these wildfires in British Columbia and Alberta are near the border. Englefield said that the “one closest to the US border is 1000 hectares in size and about 60 km from the border.”

NASA’s fire map also shows wildfires are occurring in Mexico, with several of the active fires close to the U.S.-Mexico border. A 50 to 100-acre brush fire burned in Mexico close to the border on Aug. 29, the San Diego Union-Tribune reported.