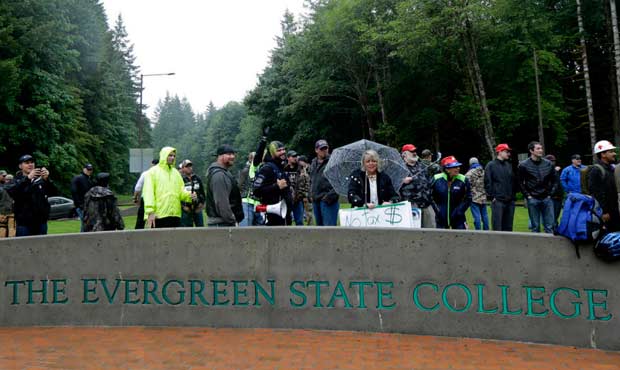 Wendy Endress, vice president for student affairs at Evergreen, addressed the college community in a Friday email, which acknowledged multiple people alleged being stalked or having their “freedom of movement” impeded, The College Fix first reported Monday.

“In the future, individuals could be charged with crimes including obstructing law enforcement, disorderly conduct, criminal mischief, and/or unlawful imprisonment,” said Endress. “Preventing a law enforcement officer from responding could place community members at great risk. Blocking egress doors is a violation of fire codes. This action endangered everyone in the Library.”

Protests erupted at Evergreen in late May, spurred by the decision of professor Bret Weinstein not to participate in a Day of Absence, on which white students were invited to segregate themselves from students of color. (RELATED: Evergreen Program Instructs Students To ‘Consciously Act’ On Race, Gender)

George Bridges, president of Evergreen State, reported the college experienced a “slight decline” in enrollment since the May protests, but insisted the numbers were not as grave as those reported by other universities experiencing student backlash. (RELATED: Mizzou Enrollment Keeps Plummeting After 2015 Protests)

The Daily Caller News Foundation reached out to Evergreen for comment, but received none in time for press.