I’ll preface this by saying I’m not the guy to be taking financial advice from. But hear me out, because if there’s one thing I know, it’s Japan.

The Tokyo 2020 Olympics will bring a huge economic boom to Japan’s tourism industry. This is something you can start investing in now.

The problem is there are so many varieties of these, and tourism dollars will be pretty evenly spread through all these competing businesses.

Wouldn’t it be nice if there was some singular business whose patronage could not be escaped? Well it turns out there is. The Tokyo rail system.

People will be converging not only from all over Japan, but also the world, to attend the Tokyo 2020 Olympics. It’s also nearly impossible to navigate Tokyo without using their trains unless you’re passing through. If you’ve been there, you know. And if you’re there for the Olympics, you probably won’t be driving.

The rail company that operates Tokyo is East Japan Rail Company (East JR) and is listed on the stock exchange as EJPRY.

Yes, East JR is a monopoly for Tokyo rail transportation. Regardless of how you feel about monopolies, I fail to see how a Japanese rail monopoly operating in Eastern Japan is your problem here in America. 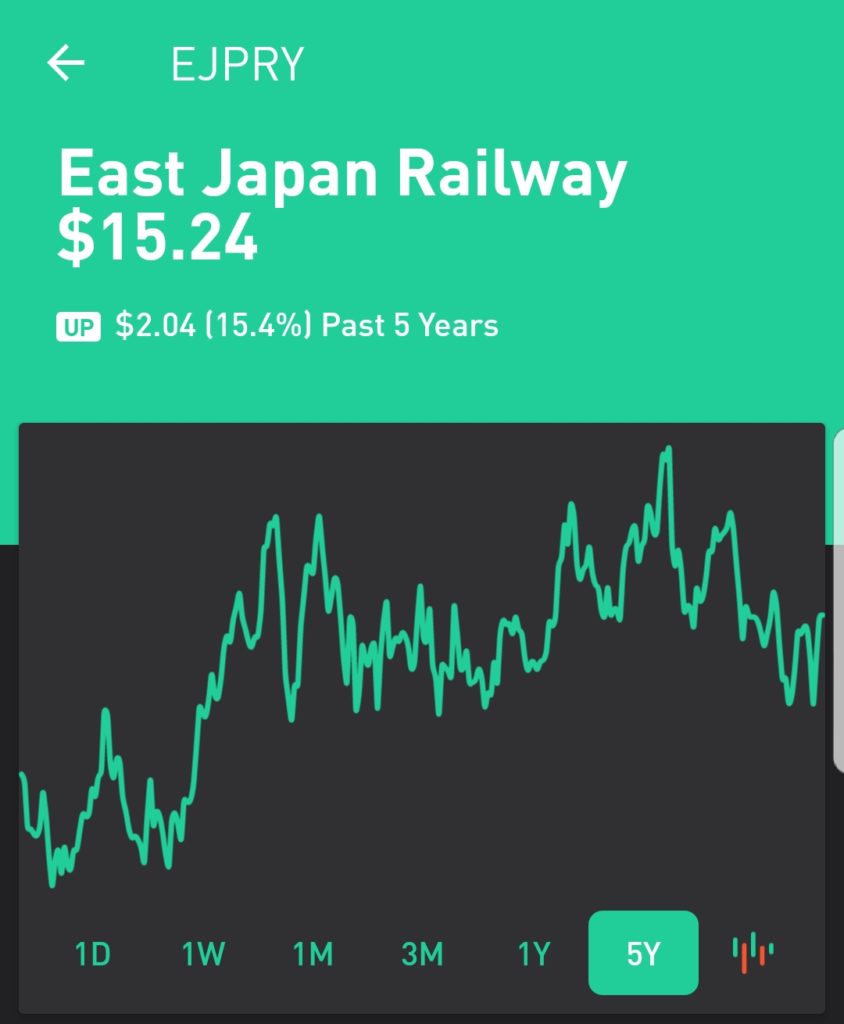 As you can see, their stock price is not that expensive, and really not all that volatile (as people steadily rely on train transportation in Tokyo daily).

You can easily buy shares of EJPRY using the stock exchange app called Robin Hood, which has no trading fees. If you do not have Robin Hood already, you can get it through this referral link here, which will direct you to the download on your app store, as well as reward you with a free random stock share to get you started for using the referral link.

Remember, no trading fees is great for people like me who don’t have large sums of money to invest all at once. But trading fees also discourage impulsive buying/selling, which is a great way to lose money.

But get in on that bump. You have about a year and a half to do it.

Disclosure: I am not employed by nor affiliated with the East Japan Rail Company. I don’t live in Japan. I am, however, a new shareholder. I chose to purchase EJPRY shares for the exact reasons stated in the article.

Woman Allegedly Tries To Poison Husband With Antifreeze, Gets Caught By 4-Year-Old Son