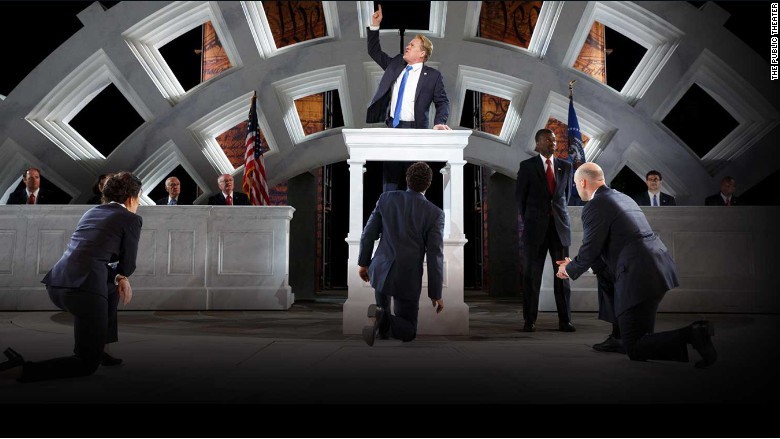 “Cowards die many times before their deaths; the valiant never taste of death but once.”

Delta and Bank of America have pulled their funding from The Public Theatre Company of New York over their ‘controversial’ interpretation of “Julius Ceasar.”

The issue lies in the costuming and artistic choices of the actors. Ceasar appears very Trumpsian, and his wife, Calpurnia speaks with an accent similar to that of Melania Trump.

And because the whole point of Julius Ceasar is the fall out of his brutal assassination, that means, yet again, we have a situation where Donald Trump is being murdered for our entertainment and art. See also: Kathy Griffin, Spawn, and so on.

So of course when the word caught on that Ceasar was being handled this way, right-wing media folks hopped on their keyboards, raged, and got the attention of Delta Airlines and Bank of America, and there goes some funding.

It might be my liberal-arts indoctrination talking, but I think this version of Ceasar is a cool idea. Shakespeare is universal and poetic and timeless and excellent, but god damn is it hard to get new people in the door.

His work is written in iambic pentameter, which is a sometimes hard-to-parse form of verse, and all of his works naturally take place in the distant past, which is a shame because even ‘minor’ Shakespeare works like Henry The VIIII are awesome when the people putting on the show know what they’re doing.

Thus, updating the costumes and the setting of Julius Ceasar seemed like a good idea to me. Especially when you consider its message.

Basically, scared for their Republic, jobs, and the power hungry nature of Ceasar, the Roman Senate conspires to have him murdered. And they do.

What follows is mass chaos, more back-stabbing, a war, and a tragic spiral of events that leads, well, I won’t say because I’d hate to spoil a 418 year old work of art.

What Ceasar is saying, and what those upset are missing is that this is ultimately a work that’s more-or-less Trump neutral. The play’s artistic director Oskar Eustis put it best:“Julius Caesar can be read as a warning parable to those who try to fight for democracy by undemocratic means…To fight the tyrant does not mean imitating him.”

And that’s a very important point here. By using Trump and modern settings, those paying attention will realize you can’t fight Trump via escalation because it will result in total anarchy. You have to fight via the courts and via the democratic progress; that we need now, more than ever, to uphold our beliefs in liberty, due process, and free speech, both constitutional and socially implied. The ancient romans of the play failed to realize that, and paid the price.

And make no bout a doubt it, we are facing similar chaos. Delta and Bank of America were bullied by social media, likely Twitter. Only 24 percent of Americans use twitter.

Now, going forward, it seems pretty hard to take any sort of risk in this day and age. The left, the right, all have their daggers our and are more than excited to stab anyone in the wallet they can. This production is just another easy target to vindicate one side or the other, and a poor target at that.

Look, if you can’t see the difference between dressing up Shakespeare for modern times with our President and Kathy Griffin holding a fake bloodied Trump head, I can’t help you.

Ceasar isn’t a celebration of murder or a damnation of government. It’s about fallible men who take drastic action in the face of a man they can’t understand and control and come to regret it instantly.

It’s called a Tragedy for a reason, and the fact folks can’t see that, be it Delta Airlines, Bank of America, or the social media masses who only preach free speech when it suits them, is one too.