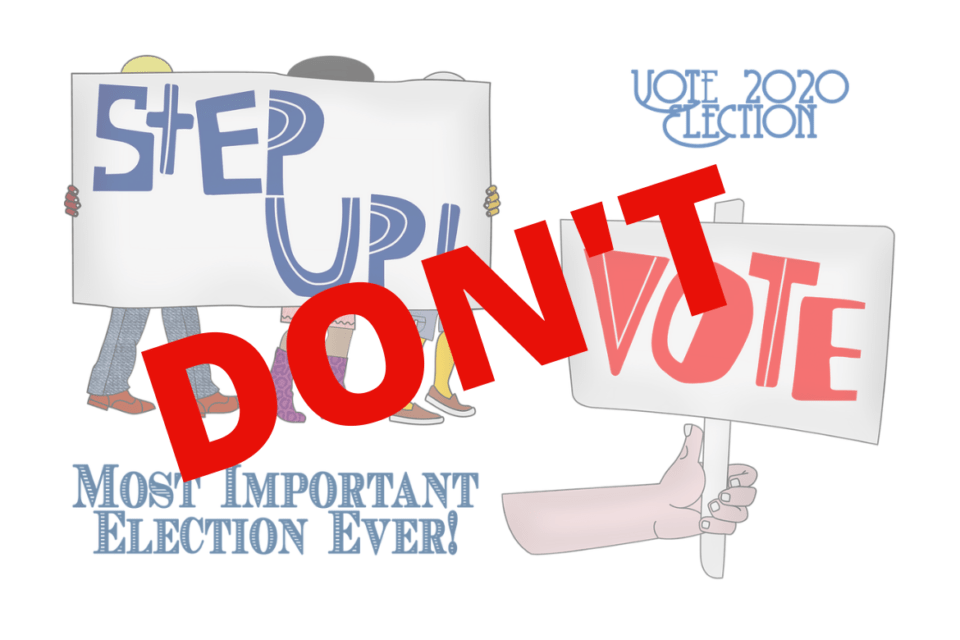 If you listen to the media, big tech companies, and celebrities, you would be under the impression that this is the “most important election of our lifetime,” and the fate of our Constitutional Republic depends on every citizen voting.

Contrary to the opinion of the powers that be and their NPCs, not every American citizen should vote. In fact, many people in this country shouldn’t be in a voting booth at all!

Without further ado, I give you four groups of people that should not vote.

If a potential voter is so constitutionally illiterate that he or she does not understand the separation of powers and the function of the three branches of government, their vote is not helping anyone except those who wish to control them.

While I wish every single American would read both the Federalist and Anti-Federalist Papers as it helps to understand the process and debates which gave birth to the U.S. Constitution, every single individual in this country is without excuse not to understand that Congress (which is comprised of the Senate and House of Representatives legislates), the Judiciary (Supreme Court) interprets the constitutionality of a particular law, and the Executive Branch enforces laws passed by Congress. If you fall into this category, please educate yourself before you consider voting—never vote in an election as long as you live.

I don’t say this to be harsh, but an ignorant vote hurts the entire country and will ensure national destruction.

These are the individuals who have bought into the scam that their political party sold them. People who fall into this category don’t have any principles in reality and only care about their party winning and the other guy losing. This kind of voter would follow their respective party straight to hell as long as their guy is the ruler of the government-created wasteland. The party line voter will vote straight ticket for an R, D, L, or G—not because he or she believes the candidate running for the office in question is best suited for the job, but rather to keep the “other guy” out. Party line voters have a strong tendency to think their party can do no wrong and that only the opposition created the problems in our government. These people criticize their neighbor on the other side of the aisle for the speck in his or her eye while refusing to remove the log from their own.

The Lesser of Two Evils voter

This term is something I heard thrown around a lot during the 2016 Presidential Election by people who didn’t like Donald Trump or Hillary Clinton. This group of people thinks both candidates are awful, but will vote for the candidate they feel has rationalized in their head is less terrible than the other.

The truth of the matter is that there is no such thing as the “lesser of two evils”. This phrase is nothing more than a meaningless attempt to justify a bad decision in one’s own mind. Evil is evil. It should not be tolerated but rather squashed. If you truly have reached the conclusion that all your potential choices in an election are evil, it is perfectly acceptable to say ‘no’. I would also like to offer a word of encouragement to those who for whatever reason have decided to sit an election out. Do not let anyone guilt or shame you into voting for someone you can’t cast a vote for. You have every right as a free individual to say ‘no’, and to express any dissatisfaction you have with an elected official regardless of whether you voted or not. Those who believe otherwise should refer to group number one.

This group of people are the uninformed folks who only show up to vote every presidential cycle but do nothing in between the time that passes every four years between cycles. They have very little to no knowledge of history or current events, and they believe everything they hear on CNN or Fox News without even stopping to consider they are being exploited. In local elections, they never show up at city council or town hall meetings. They see the POTUS and their state governors as some sort of divinely appointed emperor who is pretty much all-powerful and can do whatever he or she desires.

I don’t have a problem with voting. I want people to vote if they choose to do so unless they fall into one of the four categories I just described. The reason for this is that the American people as a whole suffer due to the foolish decisions of others. I am not willing to allow the masses who refuse to vote wisely sacrifice America at the altar of those who worship the State. And you shouldn’t either.

What is Augmented Reality?