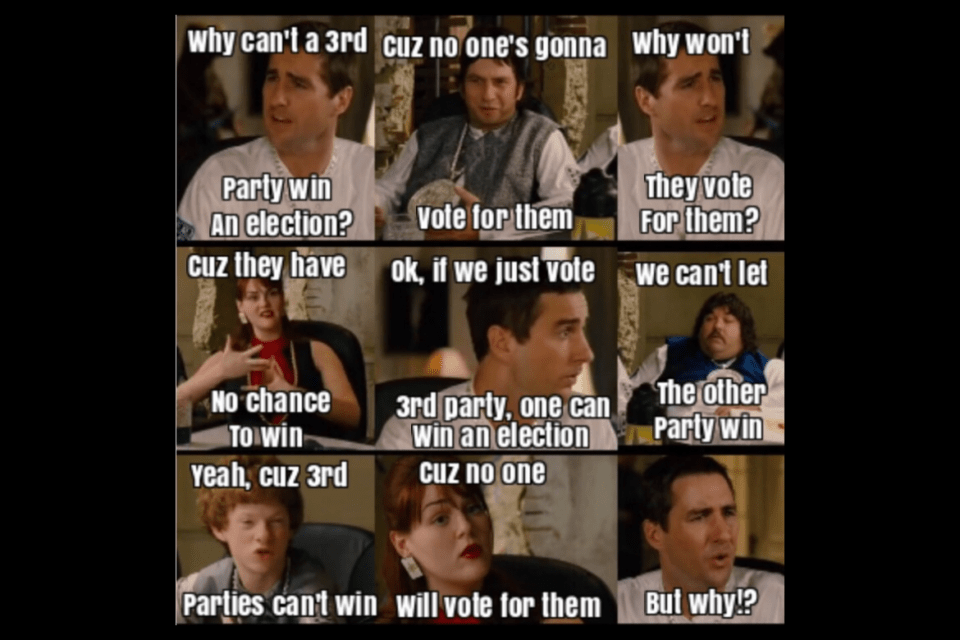 Joe Biden hasn’t even made a decision yet on which wildly flawed establishment Democrat he’ll pick as his running mate, and yet the fear mongering masses are already out in full force.

But here’s what they’re actually saying to you:

Your voice doesn’t matter as much as mine.

Your voice doesn’t have as much value to them as their own voice, and because of that you should silence yourself and do something that goes against your own principles. The problem with this tactic? Aside from being unscrupulous, this is a form of voter suppression.

No matter how much you try to justify this as some moral crusade, at the end of the day you’re using threats and intimidation tactics to coerce someone into voting differently than they would if they were allowed to reach a decision on their own. How else is someone to interpret “If you don’t vote for Biden, you’re giving us four more years of Trump!” as anything other than a threat?

This bullying tactic sits on the top shelf of the Voter Suppression Library, nestled in between tried and true classics How to Lose an Early Mail-in Ballot in 10 Days and Gerrymandering for Dummies. I like to call this one Atlas Shrugged and Voted for the Lesser of Two Evils. There may be more creative names out there, but voter suppression by any other name is still voter suppression.

Of course, this fear mongering voter suppression tactic has been around for ages, so don’t expect it to go anywhere any time soon. It manifested in perhaps the most serious way in 1992, when Ross Perot nearly upended the political establishment in his presidential run. Perot qualified for the presidential debates against George HW Bush and Bill Clinton, and as a result, the Commission on Presidential Debates raised their criteria for debate inclusion. No third party or independent candidate has qualified for these debates since.

This has lent credibility to the lazy argument that third party candidates have no real shot at winning and therefore shouldn’t earn your vote. Circular logic aside, the reasons these people present for why third party candidates can’t win are solely due to the fact that the political system has been designed specifically to exclude them in the first place.

All of this has created a culture in which it’s already taboo to even think about voting third party. You don’t learn about the Libertarian Party in your US history classes, even though their first presidential ticket in 1972 made history by becoming both the first openly gay man and the first woman to receive an electoral vote. Instead, people are taught from an early point in their lives that this is a two party system; we are socialized to accept that those are the only options.

So when someone says they’re going to vote third party, that is the result of a significant change in thought processes. You don’t just easily toss aside all those years of indoctrination and being told that the lesser of two evils somehow isn’t evil (they are). This is a decision that comes after a serious moral dilemma of not being able to vote, in good conscience, for either the Republican or Democratic candidate. Once you’ve reached that point, there is no going back; you cannot be talked into voting for either of those inherently flawed and evil candidates.

This is why the fear mongers don’t ever talk about the candidate they’d like you to vote for. It’s always about the stick, not the carrot. It actually might be impossible to make the pitch for Biden without mentioning Trump, and vice versa. And why would you expect anything else? Both have been accused of sexual assault, both have touched on overtly racist tropes multiple times in the past, and both are ancient relics of a time long gone by. The only difference is that while Trump has spent the past four years using the system to target certain groups he hates, Biden spent the past three decades building that system.

No, these people aren’t interested in convincing anyone to support their candidate. They’re just so obsessed with denying victory to the other side that they’re willing to do whatever it takes, including marginalizing your voice with intimidation tactics. How many presidential elections are “the most important election of our generation?” At this point, politics is turning into the country music industry, where every single awards show is “the biggest night in country music.”

Yet somehow these people will suggest that getting Trump out of office will magically solve everything; as if Biden doesn’t have his own disastrous climate change record, isn’t still touting a foreign policy predicated on American imperialism, or helped usher in the current era of mass incarceration that’s fueled the tensions between police and people of color.

Despite all the terrible things Biden is very much on record of doing and supporting – don’t forget how proud he was to work with segregationists – these people will somehow still make you out to be the bad guy because you choose not to vote for a guy who’s built a career by standing on the shoulders of the marginalized. And the reason why these fear mongers do this—why they will bully and intimidate you—it all boils down to one very simple truth.

They don’t care about your voice. To them, you only have value or worth if you agree with them. If not, then you’re as good as dead to them.