The five-point pledge contains some much more seemingly reasonable provisions, like an agreement to “aggressively enforce” existing federal laws to prevent the sexual exploitation of children online, and to appoint an Attorney General who will make prosecuting those laws a “top priority.”

However, other portions of the pledge may frighten onlookers as resembling the attributes of a nanny state. This includes the “serious consideration” of a Presidential Commission to examine the “harmful public impact of Internet pornography on youth, families, and the American culture.” The pledge also commits to establishing corporate partnerships to implement viable technology tools and solutions to reduce the exploitation of children online.

This is certainly not the first time in which Donald Trump has advocated for acts likely in conflict with the First Amendment. Late last year, he advocated “closing up” parts of the internet to combat terrorism. When confronted about this conduct, Trump infamously and derisively responded, “Somebody will say ‘Oh freedom of speech, freedom of speech.’ These are foolish people.” He insisted that he would be able to persuade Bill Gates to assist him in limiting internet access.

In another instance, Trump stated that he was interested in “opening up” libel laws so that he could more easily sue journalists for reporting negative stories about him. In the same breath, he lamented that journalists were so difficult to win cases against because they’re “totally protected.”

But Trump’s biggest offenses against the First Amendment may not have to do with the provision’s protection of freedom of speech, but rather its protections of freedom of religion. Late in 2015, he advocated for banning all Muslim immigration to the United States. He has also repeatedly advocated for shutting down mosques and subjecting them to surveillance.

This is the danger of a politician controlled only by populism and with no apparent binding principles. Trump will just as quickly disregard the rights of minority as is feasible and politically expedient. It is important to remember that the Bill of Rights were crafted with this very fear in mind. As articulated by James Madison in Federalist No. 10, too much democracy can often lead to “mobocracy,” with the rights of smaller groups being trampled by those in power.

Another interesting storyline in Trump’s signing of this pledge is that it lines up perfectly with the platform agreed upon by the crafters of the Repuplican Party platform. At the Republican National Convention, language in the foundational documents decreed pornography a “public health crisis.” Though Trump has clearly not thus far affiliated himself with the evangelicals in his party, his signing of the Enough is Enough pledge may be a move to appease this group.

This interference with the consumption of pornography is not foreign in the western world, as the UK in December 2014 banned pornography containing a number of sexual acts. Should someone like Trump take power, it would be possible for an executive agency to take the actions he so desires, though any such input would highly scrutinized on constitutional grounds. It is worth noting, however, that obscenity has been historically held by courts to be unprotected speech, and therefore, judges are generally more permissive of such regulations.

In total, Trump’s recent signing of this pledge is just the latest indication that he cares little for the Constitution or its central tenets. It will be interesting to see if Trump offers an explanation for his actions, or if, as usual, he ignores any criticism and uses it as an excuse to blame someone else. 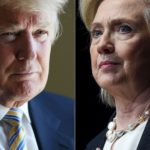 The Nation is Focused on Trump, but Clinton is No Friend to Muslims