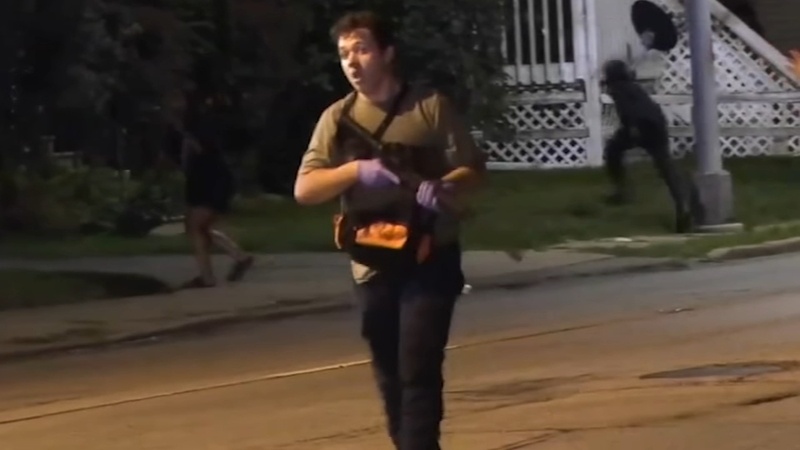 Former President Ronald Reagan once observed: “The trouble with our Liberal friends is not that they’re ignorant; it’s just that they know so much that isn’t so.”

Such an observation has never been more relevant than it is now, especially in the aftermath of Kyle Rittenhouse defensively shooting three people in Kenosha.

The Left has resorted to distorting events, the timeline, and assuming motives that conveniently confirm to their biases. Worst yet, they believe their terrible takes are somehow legally binding. They don’t actually care about what really happened. They simply and deliberately want to see someone they dislike be destroyed, and at any cost. It’s certainly a good thing that the court of public opinion is not an actual court.

Here I’m going to disassemble such irresponsible myths that seek a vindictive political vindication rather than actual justice.

1. KYLE CROSSED STATE LINES FOR THE PURPOSE OF ATTENDING THE PROTEST.

This is false. Kyle actually crossed state lines for work. Kyle worked in Kenosha as a lifeguard, which would require him to be First Aid & CPR trained. As Kyle lived very close to the Illinois/Wisconsin state border, and only 20 minutes from Kenosha, this is not unusual.

As Cassandra Fairbanks of The Gateway Pundit reported on August 28th, Rittenhouse that day went to his job as a lifeguard in Kenosha, and afterwards volunteered to help clean graffiti at a local school.

This is also stated by Rittenhouse’s defense in their statement that was released the following day:

“After Kyle finished his work that day as a community lifeguard in Kenosha, he wanted to help clean up some of the damage, so he and a friend went to the local public high school to remove graffiti by rioters. Later in the day, they received information about a call for help from a local business owner, whose downtown Kenosha auto dealership was largely destroyed by mob violence. The business owner needed help to protect what he had left of his life’s work, including two nearby mechanic’s shops.”

The Left is asserting this as fact, when not only has it not been confirmed, but it’s rather improbable. While this is still an unknown factor to the public, it is still very irresponsible to parade it as truth, especially when you have no way of knowing. That’s just as good as lying.

As his gun was not present with him at his lifeguard job or at the school graffiti cleanup, most likely the gun was obtained in Wisconsin where private transfers without background checks are legal.

Moreover, the defense statement states that the gun never crossed state lines, therefore being obtained in Wisconsin that day.

“The business owner needed help to protect what he had left of his life’s work, including two nearby mechanic’s shops. Kyle and a friend armed themselves with rifles due to the deadly violence gripping Kenosha and many other American cities, and headed to the business premises. The weapons were in Wisconsin and never crossed state lines.”

While a defense statement certainly isn’t irrefutable proof, it’s hard to imagine that they would release that in a defense statement if they couldn’t verify it. So this is a wait and see point, and making a conclusion like the Left has done that specifically favors themselves is certainly not honest.

3. KYLE WAS NOT LEGALLY ALLOWED TO POSSESS A GUN IN ILLINOIS

It’s true that he certainly couldn’t have purchased a gun in Illinois, nor generally open carry with one. But it certainly was not illegal for him to handle one or shoot one in Illinois under certain circumstances. But this is actually a moot point and a goal post shifting distraction, as Illinois laws do not apply in the state of Wisconsin where he is being charged. He is not being charged under Illinois criminal codes, and as stated in the previous point above, there isn’t a clear indication that the gun was ever in Illinois anyhow.

4. BEING A MINOR IN POSSESSION OF A GUN PROVES THAT IT WAS MURDER

Well, if this isn’t at best case double jeopardy, or at worst case infinite jeopardy, I don’t know what is.

If this were true, then Kyle could be charged under every criminal statute under the sun and be found guilty automatically. This isn’t how the courts work.

5. HE WASN’T ALLOWED TO POSSESS A GUN IN WISCONSIN

Again, he certainly wasn’t allowed to legally purchase a gun in Wisconsin. But at this time there is no indication that he did, as opposed to being loaned to him. And while Wisconsin State law generally bars people under the age of 18 from open carrying, there are exemptions and loopholes specifically for the ages of 16-17 under certain circumstances. This is where the court debate will lie regarding the illegal possession charge, which is a misdemeanor, and does not dictate motive.

6. HE WENT THERE WITH THE INTENT TO KILL PEOPLE

This is also pretty well negated by the fact that he only fired at (and only hit) people who directly attacked him, and attempted to flee in both incidents prior to firing. He did so with precision and discipline, firing no more rounds than necessary, and even from a difficult and disadvantaged position on the ground. He fired on nobody else. This is not only a very important point, but also an extraordinary one, all things considered. Panic firing into the crowd is something others might have done in that situation.

Now let’s see what the evidence shows. According to the defense statement:

“After the crowd passed the premises and Kyle believed the threat of further destruction had passed, he became increasingly concerned with the injured protestors and bystanders congregating at a nearby gas station with no immediate access to medical assistance or help from law enforcement. Kyle headed in that direction with a first aid kit. He sought out injured persons, rendered aid, and tried to guide people to others who could assist to the extent he could do so amid the chaos. By the final time Kyle returned to 2 the gas station and confirmed there were no more injured individuals who needed assistance, police had advanced their formation and blocked what would have been his path back to the mechanic’s shop. Kyle then complied with the police instructions not to go back there. Kyle returned to the gas station until he learned of a need to help protect the second mechanic’s shop further down the street where property destruction was imminent with no police were nearby.

As Kyle proceeded towards the second mechanic’s shop, he was accosted by multiple rioters who recognized that he had been attempting to protect a business the mob wanted to destroy. This outraged the rioters and created a mob now determined to hurt Kyle. They began chasing him down. Kyle attempted to get away, but he could not do so quickly enough. Upon the sound of a gunshot behind him, Kyle turned and was immediately faced with an attacker lunging towards him and reaching for his rifle. He reacted instantaneously and justifiably with his weapon to protect himself, firing and striking the attacker.”

An analysis from the New York Times appears to corroborate these events with video evidence they have collected and examined.

Two minutes later, at 11:43 p.m., Rittenstein is captured on camera again. He wants to go back to the car dealership he says he’s protecting, but is barred by police from returning, as seen in @Ruptly footage: https://t.co/yFQfRhuOAS. pic.twitter.com/23vcP5cqHq

Footage from livestreams indeed confirms that multiple cars were being damaged at that second car dealership, and at least one was set on fire, at around at 11:45 p.m. pic.twitter.com/gaeDe53nqK

But Rittenhouse doesn’t appear to stop at the trash bin fire. It’s only 30 seconds before the shooting that we see that Rosenbaum chases Rittenhouse with several other people, for unknown reasons. This is visible on both @KoerriElijah and Regg Inkagnedo’s livestreams. pic.twitter.com/lqm2zSUtNH

What matters most in the case, is whether this first shooting was a justified act of self defense. Whether or not he was in unlawful possession of the gun matters not, as that is a separate misdemeanor charge. That charge is debatable, but based on everything we’ve seen, it’s the only one I see potentially sticking. Intentional homicide certainly will not stand up to any legal muster, especially with Kyle offering First Aid to protesters prior to being pursued, who as a lifeguard was trained and qualified to administer it.

SO WHY ARE THEY STILL PURSUING THESE CHARGES?

I’d muster that it’s largely reactionary. If they were smart, they would drop them as even lesser degree homicide charges would be a tremendous uphill battle based on this being pretty clear self defense.

But I’ll let the defense team have the final word on this question.

“Kyle did nothing wrong. He exercised his God-given, Constitutional, common law and statutory law right to self-defense.

However, in a reactionary rush to appease the divisive, destructive forces currently roiling this country, prosecutors in Kenosha did not engage in any meaningful analysis of the facts, or any in-depth review of available video footage (some of which shows that a critical state’s witness was not even at the area where the shots were fired); this was not a serious investigation. Rather, after learning Kyle may have had conservative political viewpoints, they immediately saw him as a convenient target who they could use as a scapegoat to distract from the Jacob Blake shooting and the government’s abject failure to ensure basic law and order to citizens. Within 24-36 hours, he was charged with multiple homicide counts.”