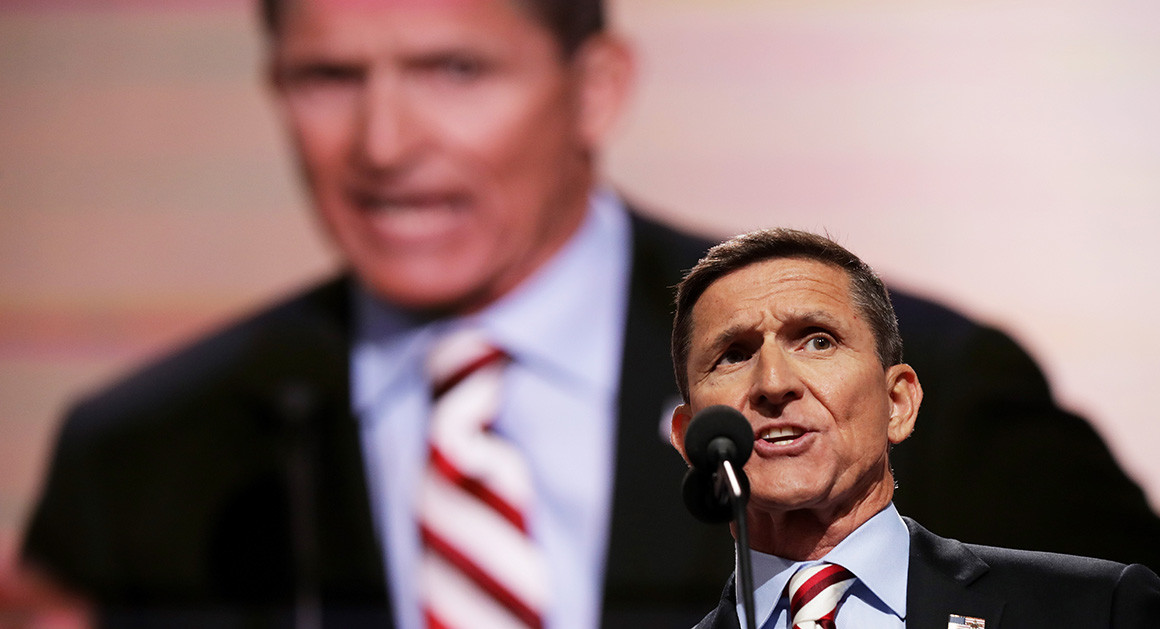 In the final hours before his resignation, now-former White House National Security Adviser Michael T. Flynn said he “crossed no lines” in his discussion with Russia’s ambassador, but ultimately he was most concerned about the steady stream of leaks to reporters based on classified information.

“In some of these cases, you’re talking about stuff that’s taken off of a classified system and given to a reporter. That’s a crime,” Flynn told The Daily Caller News Foundation Investigative Group during a telephone interview from his White House office on Monday.

“You call them leaks. It’s a criminal act. This is a crime. It’s not just a wink and a nod,” Flynn said.

“Over the weekend,” Bloomberg’s Eli Lake reports, Flynn “was instructed not to speak to the press when he was in the fight for his political life. His staff was not even allowed to review the transcripts of his call to the Russian ambassador.”

On Monday morning, he spoke with TheDCNF at length, saying he was told to “go out and talk more.”

“He [President Donald Trump] expressed confidence,” Flynn told TheDCNF, just hours before his resignation. “That’s when he told me that we need to go out and talk more. So I’m going to do that.”

“I haven’t been fighting back because I’m not that kind of guy. I’m behind the scenes. I’ve always been behind the scenes. But this is ridiculous. It’s so out of control. I’ve become an international celebrity for all the wrong reasons.”

The politicization of intelligence and the release of classified information for use against political opponents is likely to spark a fierce firestorm in Washington.

President Donald Trump tweeted early Tuesday on leaks from officials within his administration, saying, “The real story here is why are there so many illegal leaks coming out of Washington? Will these leaks be happening as I deal on N.Korea etc?”

White House press secretary Sean Spicer said at his daily briefing on Tuesday that the president “is clearly upset” about leaks and that past leaks affected earlier administrations, including Obama’s.

“People who are entrusted with national security secrets, classified information, are leaking it out. That’s a real concern for this president,” he said.

“We have to wonder that people who work for our government, who are entrusted with classified information, decisional-based materials are leaking that information out. That, I do believe is a big story.”

Spicer did not spell out any steps Trump might take to stem the flow of leaks, however.

President Barack Obama fired Flynn as DIA director in 2014 after Flynn delivered testimony before Congress that was at odds with Obama’s contention that radical Islamic terrorism, including ISIS, was not a major threat. Since then, Obama administration officials have openly held low regard for him.

Since Trump and Flynn entered the White House, anonymous sources have given select reporters information about telephone intercepts conducted by the National Security Agency (NSA).

The classified information secretly given to reporters purportedly showed that Flynn discussed sanctions on Dec. 29, when 35 Russian diplomats were being expelled that same day by the outgoing Obama administration.

Other intelligence leaks have revealed Trump’s private discussions with heads of state soon after he became president-elect.

In a Feb. 9 story, The Washington Post cited unnamed “current and former U.S. officials” who accused Flynn of violating the law in a Dec. 29 telephone conversation with Russian Ambassador Sergey Kislvak.

Flynn called the leaks of classified information against government officials “unprecedented,” and predicted those would be the focus of future congressional investigations.

“Members of Congress are very concerned because these are leaks from classified systems. The House and Senate are looking into those things, as they should,” he told TheDCNF.

The issue of government leaks is an issue for House Permanent Select Committee on Intelligence Chairman Devin Nunes. On Monday, Nunes told Bloomberg News that he views leaks about Flynn’s private conversation as part of a pattern.

“There does appear to be a well-orchestrated effort to attack Flynn and others in the administration,” said Nunes, who is a California Republican. “From the leaking of phone calls between the president and foreign leaders to what appears to be high-level [Foreign Intelligence Surveillance Court] information, to the leaking of American citizens being denied security clearances, it looks like a pattern.”

A Wall Street Journal editorial Tuesday asked, “Did U.S. spooks have a court order to listen to his conversations?”

Former intelligence and military officers told TheDCNF they agree Flynn was the victim of a highly orchestrated “disinformation campaign” generated by current and former intelligence officers, many with loyalties to former President Obama.

Intelligence officials are supposed to use their expertise in psychological warfare and disinformation campaigns against enemy states, but never against an occupant of the Oval Office.

“Who pulled the NSA tapes on Mike Flynn?” asked retired Col. James Waurishuk, a 30-year intelligence officer who once served in the National Security Council. “Who compiled it? Who released it?” the retired Special Forces veteran asked in an interview with TheDCNF.

Waurishuk argued the many leaks meant the public is seeing the politicization of intelligence. “There are those in the intelligence community that are more concerned with their agendas than with national security,” he said.

“Notice how the intelligence community can leak Flynn’s conversation, but there are no leaks on Hillary Clinton and Benghazi,” he added.

Another former intelligence official, retired Col. James Williamson, told TheDCNF, “What is illegal is that Flynn has his conversations eavesdropped on. Who at NSA leaked the transcript?”

Williamson called it an “egregious overstep” by current and former intelligence officials.

Flynn insisted that he crossed no lines in his telephone conversation with Kislyak: “If I did, believe me, the FBI would be down my throat, my clearances would be pulled. There were no lines crossed.”

Flynn said there was a brief discussion of the 35 Russian diplomats who were being expelled by Obama in retaliation for Moscow’s alleged interference in the 2016 campaign.

“It wasn’t about sanctions. It was about the 35 guys who were thrown out,” Flynn said. “So that’s what it turned out to be. It was basically, ‘Look, I know this happened. We’ll review everything.’ I never said anything such as, ‘We’re going to review sanctions,’ or anything like that.”

Flynn said he apologized to Vice President Mike Pence about his earlier contention that there were no discussions about the expulsion order, which was part of the Obama sanctions.

“For the vice president, I feel terrible. I put him in a position. He’s a man of incredible integrity. I think the world of him. He is so good for our country,” he said. “I should have said, ‘I don’t know. I can’t recall,’ which is the truth. Looking back, that’s what I should have done.”

The December conversation “was not to relieve sanctions. It was basically to say, ‘Look, we’re coming into office in a couple of weeks. Give us some time to take a look at everything.’”

Before he submitted his resignation, Flynn said the president urged him early Monday morning to speak out more frequently.

“That’s when he told me that we need to go out and talk more.” Flynn told TheDCNF he intended to do that.

“I haven’t been fighting back because I’m not that kind of guy. I’m behind the scenes. I’ve always been behind the scenes. But this is ridiculous. It’s so out of control. I’ve become an international celebrity for all the wrong reasons.”

Flynn has been silent since tendering his resignation.