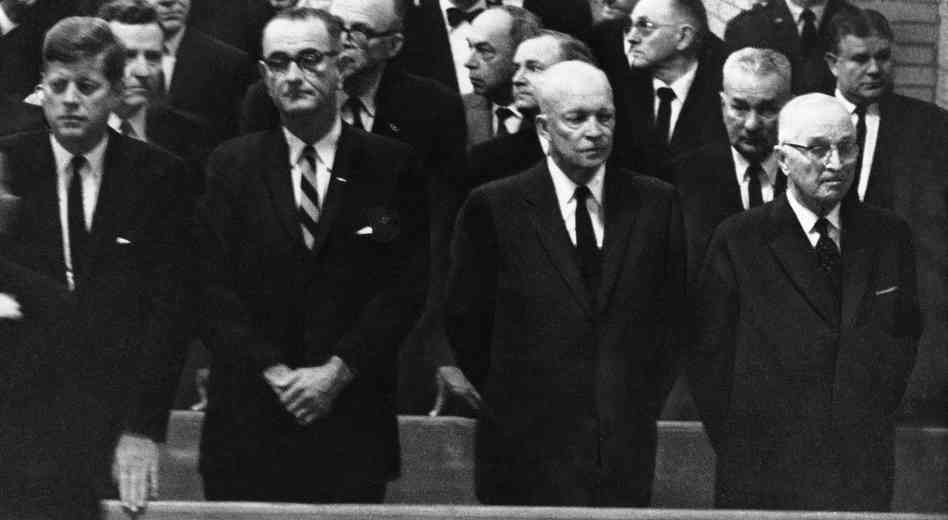 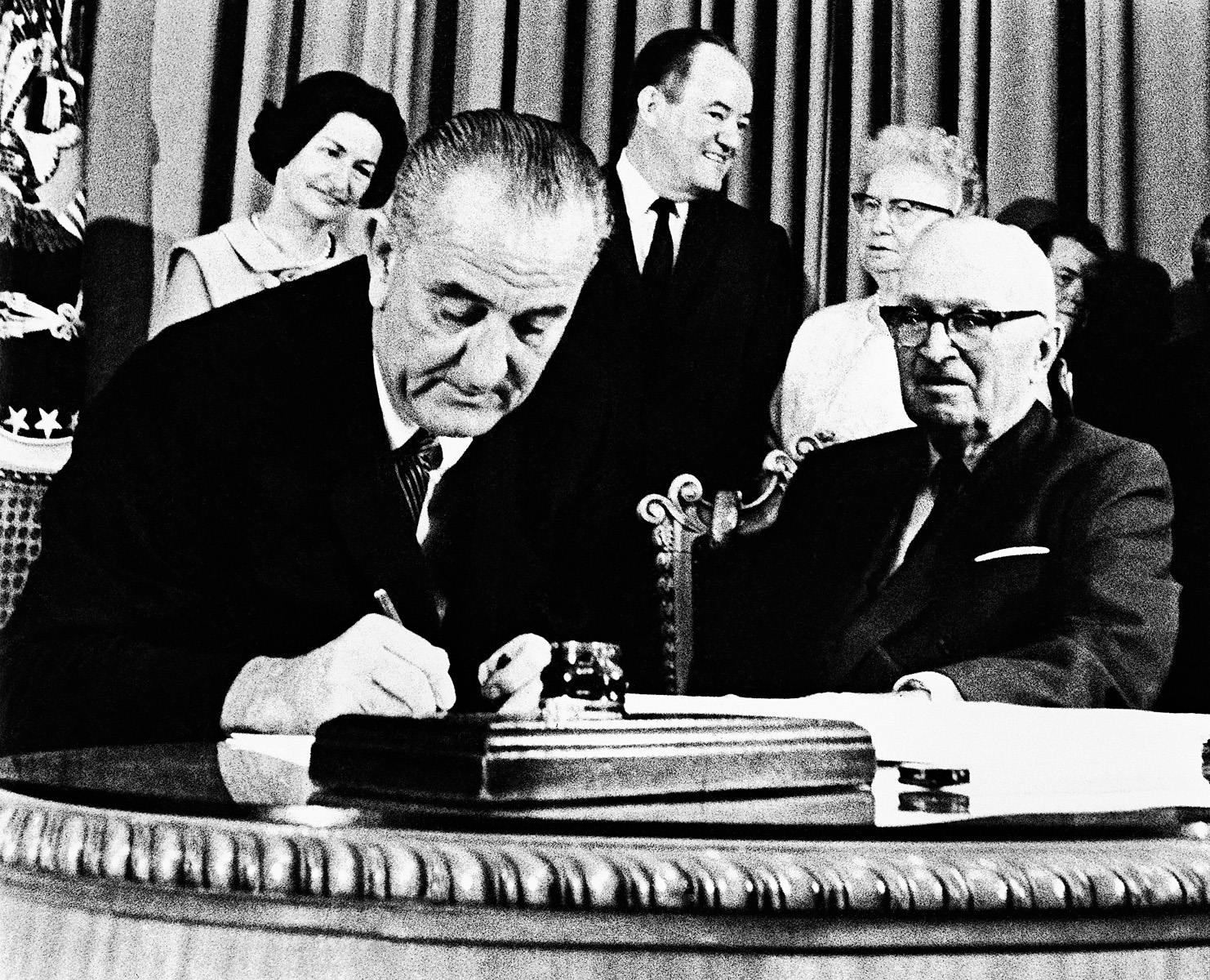 This is the final entry of a three-part series examining the gradual death of the American Dream. The first entry examined how the groundwork was laid, the second focused on the next stage that built upon that initial foundation, and this will look at further expansions that dealt the final crushing blows to the American Dream. Let’s see how it happened.

Franklin Roosevelt’s sudden death early his fourth term meant that Vice President Harry S. Truman would take over and become the next president. Like his predecessor, Truman supported continued expansions of government programs throughout his presidency. Where Roosevelt had the “New Deal”, Truman developed the “Fair Deal”.

Some of the proposals in the Fair Deal included a higher minimum wage, increased support for public housing and education, further support for farmers, national health insurance, and additional conservation and public power initiatives. Although he had some victories, Truman’s attempts to get his Fair Deal initiatives passed were largely unsuccessful. This was due to a combination of the strong Conservative Coalition in Congress, the increasing economic prosperity that came after the end of WWII, and the less vigorous approach Truman took compared to Roosevelt in getting what he wanted.

However, Truman was successful at continuing many of the domestic policies launched by Roosevelt. Some of these included seizing businesses for war purposes, creating new government programs that duplicated existing ones, and maintaining controls over prices, wages, and production. But perhaps his most shocking domestic action was his attempt to draft striking coal miners into the army so that he could order them back to work. As with many of his other efforts, Congress didn’t support him on this venture.

One of Truman’s most controversial decisions, and one of the most controversial decisions of any president, was the use of atomic bombs against Japan. Historians and civilians alike are split on whether the bombing was justified or unjustified. While debates around the necessity or lack thereof of the bombs will likely never end, their use sent a clear message that the US government had both the capability to create such weapons and the willingness to use them. This event also helped kick-start the Cold War, which would keep the world in a state of deep fear and paranoia for almost five decades.

Figuring that he wouldn’t be able to get enough support to win another term, Truman declined to run in the election of 1952. Accordingly, the Democratic candidate that year was Adlai Stevenson, who was defeated in a massive landslide by Republican challenger Dwight D. Eisenhower.

Leading up to the Republican National Convention, Eisenhower’s primary opponent for the nomination was Robert Taft. Taft was considered to be the leader of the Old-Right, which was a coalition of primarily Republicans and some Democrats that had for decades favored non-interventionism and limited domestic government (although Taft and Eisenhower differed little when it came to domestic issues). In contrast to Taft, Eisenhower was in favor of a more interventionist foreign policy. By winning both the Republican nomination and the presidency, Eisenhower’s political rise signaled the end of the Old-Right as a major force in US politics.

In addition to starting NASA and the Space Race, one of Eisenhower’s biggest accomplishments was the creation of the interstate highway system. Eisenhower’s drive for this, which is still one of the biggest public works projects in US history, came from his experience with similar systems in other countries and realizing that it would be useful for quickly and effectively transporting ground troops if the need arose. Despite its usefulness for both military and civilian purposes, however, the interstate highway system allows the federal government to pressure state governments into doing what it wants (for example, raising the drinking age to 21). The federal government accomplishes this by threatening to reduce or withhold highway funding if state governments refuse to comply with its orders.

As president, Eisenhower presided over a fairly stable period in US history. Inflation was kept low, the economy prospered, and personal income increased dramatically. While it was far from perfect, compared to how things were both before and after his time in office, Eisenhower’s presidency is still seen by many as one of the overall strongest times in US history. Unfortunately, that prosperity  didn’t last. Despite leaving the country in a strong place, as well as delivering a now-famous warning about the danger of the military-industrial complex in his 1961 farewell address, the 1960’s would see the beginning of America’s fall from grace.

John F. Kennedy and Lyndon B. Johnson: the New Frontier and the Great Society

As the first president to be limited to two elected terms by the 22nd Amendment, Eisenhower stepped down in 1961. Thus, the country would see the first newcomer to the White House since 1953. In the election of 1960, that newcomer would turn out to be John F. Kennedy, who managed to beat Richard Nixon in one of the closest elections of the century up to that point.

Kennedy’s brief administration oversaw the continuance of the Space Race, a push for increased Civil Rights measures, a strong anti-Communist foreign policy, and calls for additional government welfare programs (called the “New Frontier”). As a result of the larger budgets used to fund these initiatives, Kennedy added as much debt in three years as Eisenhower had added in eight.

Despite his ambitions, Kennedy’s presidency came to an end when he was assassinated on November 22nd, 1963. Shortly after he was confirmed dead, Vice President Lyndon B. Johnson was sworn in as the next president. Johnson would go on to accomplish many of the things Kennedy had supported (this time under the name of the “Great Society”) and in doing so made America worse for the wear.

In his 1964 State of the Union Address, Johnson declared “War on Poverty”. Some of his ideas for fighting such a war included better unemployment compensation, increased federal education funding, additional support for mass transit, and more libraries and hospitals. And, after easily defeating Republican challenger Barry Goldwater in one of the biggest landslide victories in US history in 1964, Johnson would have all the time he needed to fight that war.

To get his way, Johnson used a strategy known as “the Treatment”. This involved harassing, intimidating, and sometimes even threatening others until they gave him what he wanted. Johnson first used “the Treatment” when he was in Congress and continued it as president. He was quite similar in this way to Franklin Roosevelt (whom he strongly admired as a politician) in that they both used aggressive, forceful styles to get their agendas passed.

One thing that Johnson strongly addressed as president was healthcare. The high cost of modern US healthcare is often blamed on capitalism and free markets, but the reality is far different. While healthcare in the US was not a pure free market service prior to Johnson’s presidency, it was both far less expensive and had far fewer government controls than it did after he left office. In fact, healthcare costs previously matched the consumer price index.

That all changed with the Social Security Act of 1965. By creating Medicare and Medicaid, this act took the US much closer to having the universal healthcare or national health insurance that progressives had been calling for since the early 1900’s. Over time, these programs have caused healthcare costs to skyrocket since they have drastically increased demand for health services while the supply for such services has been unable to keep up. With Medicare in particular, costs noticeably rose in the 1980’s as life expectancies increased and there were fewer taxpayers to finance the program due to Baby Boomers having fewer kids than previous generations. Additionally, both programs given the federal government even more control of state governments than it had before.

Furthermore, the almost continuous inflation of the money supply from the creation of the Federal Reserve in 1913, along with the weakening of the gold standard in 1933, meant that the dollar had lost a significant amount of its purchasing power by the 1960’s. Johnson dealt a further blow to the dollar in 1965 by signing the Coinage Act of 1965. This bill authorized certain coins to be minted with base metals instead of precious metals. By signing that bill and allowing monetary inflation to continue, Johnson helped further weaken US currency. Since poor people have so little money already, inflation hurts them the worst. Thus, Johnson ended up hurting the very people his anti-poverty programs targeted.

Johnson’s presidency also oversaw the creation of the National Endowment for the Humanities, the National Endowment for the Arts, and the Corporation for Public Broadcasting. Through all of this, Johnson got even more people dependent on government programs, thus ensuring that they would continue to vote for more government. Additionally, as more people turned to government for relief, mutual-aid societies (voluntary organizations by which members provided each other with health insurance, unemployment benefits, children’s schools, and other benefits), which had been on the decline since the rise of government aid in the early twentieth century, continued to fall by the wayside. Thus, Johnson’s presidency continued the trend of people turning to government programs for relief instead of looking to their family members, friends, and neighbors.

This has been a look at some of the changes in the US government from the mid-1940’s until the late 1960’s that essentially sealed the fate of the American Dream. More information related to these subjects can be found in the excellent books “9 Presidents Who Screwed Up America: And Four Who Tried to Save Her” and “The Betrayal of the American Right”.

Have the final nails been hammered into the coffin of the American Dream? No one can say for sure, but considering that saving it at this point would effectively require repealing the twentieth century, it now looks doubtful that it will ever happen. However, as mentioned in the first entry in this series, knowing the cause of the sickness is essentially to curing it. The primary causes have now been pointed out, so there is still a chance of saving the American Dream. It won’t be easy and it won’t be pretty, but it’s absolutely worth trying.