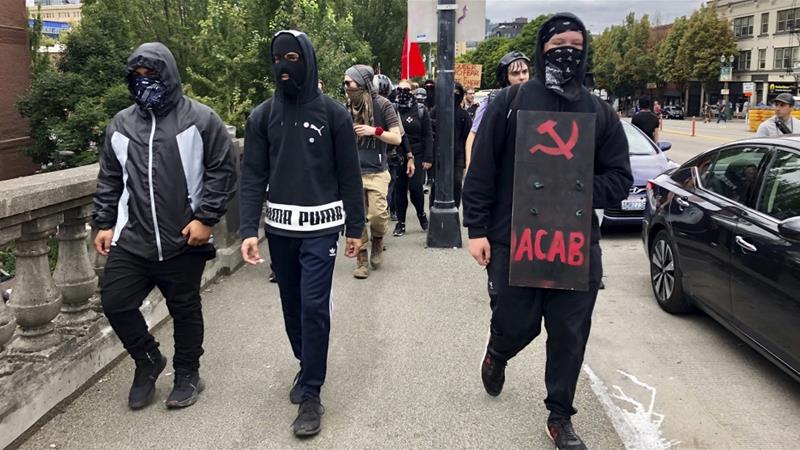 For the very first time, you have the ears of the entire nation. Many Americans, including mainstream conservative pundits have seen the video footage of George Floyd die with a knee on his neck. They were all horrified. People who were previously skeptical of your message, who criticized taking a knee on a football field, are now all saying “hold up a minute.”

George Floyd’s death was senseless and tragic, like Eric Garner and Philando Castile before him. But now people are listening.

The brutal killing of George Floyd by Minneapolis police is merely the latest in a long line of incidents of egregious police misconduct.

Yet, there are some who are riding your coattails and crying crocodile tears. They’re opportunistically hijacking your movement and your message to bring attention to their own self-serving causes.

First, we need to explain who these people are. They are Anarcho-Communists. Their core belief system is the abolition of government and private property. They believe in a mob rule society. They have existed for a long while, and were the perpetrators of the WTO Riots in Seattle in 1999. This was before they rebranded themselves as ANTIFA, which they took from European groups.

Despite what ANTIFA would have you believe, being Anti-Fascist is a relatively common and mainstream position. Yet ANTIFA is fringe, and there’s a reason for that.

This is how #FakeNews spreads. This is an example of white people doing things we asked them not to do. https://t.co/bJYDyJKMlB

DO Y'ALL SEE ANY FUCKING BLACK PEOPLE?!!??! pic.twitter.com/cemOXDTKFb

A group of white people showed up in Oakland armed with hammers and started destroying shit as people of color looked on confused and asked why they're tearing shit up. pic.twitter.com/BbptUluzcg

Nashville is being destroyed right now. Every brick I saw thrown without exception was thrown by white people. This man was yelling at these white people who’d just put horse excrement on a cop car and broke out their windows. He said, ‘they’ll blame us!’ #NashvilleProtest pic.twitter.com/TWL5VFeWGq

An organizer in Detroit asked this dude not to touch cops or mess with cop cars, and the group that he was with began to chant "You're not in charge." Keep in mind this is Detroit. pic.twitter.com/EeVol7V2MB

A group of Black men in Minneapolis attempt to prevent a group of White men from further vandalizing a building, and demands that they apologize for making Black people look bad. pic.twitter.com/ZlPv9JOuEa

THIS WHITE GROUP WAS ORGANIZED. They broke into Chase Bank and Walgreens & started fires inside. I better not hear on the news tomorrow that BLM protestors are responsible for the damage because that is not true! #BlackLivesMatter #GeorgeFloyd #oaklandprotest pic.twitter.com/JftKRnP2Hx

And of course, a white ANTIFA member made the unfortunate mistake of trying to vandalize NBA Star J.R. Smith’s vehicle.

J.R. Smith responded about the incident below:

JR Smith’s response to the video out there of him beating someone up bc they broke his car window (via @TNHTalk) pic.twitter.com/LIiyTzO7Fr

I watched a Livestream of the Friday night protest in Seattle, when an Amazon Go building had their windows smashed in by white ANTIFA activists. A black man yelled “What are you doing? This isn’t about Amazon!”

They use your group. They use your numbers. They incite the confrontations between you and the police. Then they leave you on the front lines to go destroy property in your city. They call it “collateral damage” for your movement when it was their main objective all along. Mainstream white Leftists are giving a nod to these folks when they repeat the collateral damage talking point. In doing so, they’re softening and normalizing the hijacking of your movement on behalf of ANTIFA.

And for the most part, these Anarcho-Communists are not even from your city. They came from out of town, and they go back to where they came from. They sleep soundly in their community which remains intact, while leaving your community with empty stores and ashes. And they’re happy pinning their transgressions against your community on your movement.

They are grave robbing George Floyd to meet their own ends, and at your expense.

If you see an ANTIFA member destroying property at one of your protests, they must be dealt with in the language they understand. NBA Star J.R. Smith spoke it well.

How to Make the Most of Your Rehab Experience?