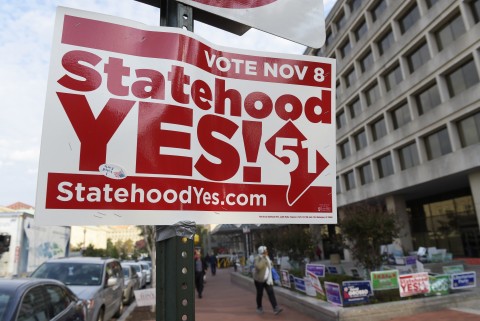 Latest in the statehood movement from the Federal Capitol of the United States of America comes a bill introduced by Democratic Del. Eleanor Holmes Norten. Norten argues that DC, a 227 year old federal municipality, deserves statehood because it is larger than two states, pays more in taxes than twenty-two states, and sends its residents to war. And while at a superficial level this might make sense, it is a horrible idea.

Delegate Holmes suffers from a lack of constitutional knowledge common among the Democratic Party’s left-wing members. Of course, she blames the consistent losing streak of the DC Statehood movement, not on its lack of merit or sensibility as an idea, but on conservatives. Her emotional appeal is short sighted, uninformed, and contrary to everything the Founding Fathers wrote when creating the capitol.
Washington DC is an exception in the United States of America. It is a large city without a state, and thus the only city on American soil not under the jurisdiction of a governor. It is the sole municipality in America where only the federal government has a direct say in its affairs. This, of course, is a great idea. Giving DC a governor and legislature, however, could cause serious problems.

To make things clear and concise, here are the two main reasons this is a bad idea.

By making DC a completely independent entity, it separates the federal and state governments on a fundamental level. DC cannot directly interfere in the affairs of governors (such as constitutional conventions), and no governor can hold the Capitol hostage. Why is this important? A governor of the Capitol would have, even if not expressly written into law, a seat of primacy over the other fifty sitting governors. He or she would almost certainly be appointed by federal elites, and thus would shatter the fundamental independence of the states that makes this country so exceptional. The 10th amendment would lose its meaning if the physical manifestation of the federal government also had a seat at the meeting table of the state governments.

In order to preserve the delicate balance of this union as we know it, the states must be absolutely proportionally equal to one another in terms of influence over the federal government.