(AUTHOR’s NOTE: This is a tongue-in-cheek look at Trump’s border wall)

Patriot Place is a “super regional lifestyle and entertainment center” planned to compliment the construction of The New England Patriots’ Gillette Stadium. There’s countless stores, restaurants, boutiques, an escape room, and a movie theater. With the stadium being the center-piece and main draw, the area has become something of an economic hub for the town of Foxboro, Massachusetts.

What was once a place for football fans to go watch football games, has become a place for the whole family to eat, entertain themselves, and catch some football if they are so inclined. It’s impressive. I’ve been there countless times.

It’s all the brain child of Donald Trump’s pal, and owner of the Patriots, Robert Kraft.

Which brings us to Donald Trump’s Mexican-American Border Wall. As eminent domain begins to take hold and citizens are being asked to sell their land, I thought, well, might as well make some money off the deal, right?

If Hoover Dam is a major attraction in Nevada, why can’t the wall be one too?

So, if we’re going to have to have a stupid expensive offensive border wall, lets explore how to get it *right* and perhaps it even pay for itself, eventually.

First, let’s talk about the wall itself.

Hopefully it looks like this and is a sight to behold. Additionally, it darn well better go several hundred feet down, as quite a few people tunnel under the border. Beyond that you’ll need visibility of some kind *through* the wall, so you can gander at any sort of shenanigans that may be taking place on the other side – maybe some leaning glass windows like The Sears Tower has?

Now let’s talk about the accoutrements. The stuff that will make this endeavor cash-flow positive. For starters, this is going to be a major construction effort. construction materials will be shipped, and thousands of people will be hired to build it. And where there’s people, there should be industry and demand for goods and services.

It is here Trump could learn from Robert Kraft…and the Chinese. The great wall of China is an amazing attraction visited by millions. As is the Patriots place. Now, combine the two and turn the ultimately rural area into something resembling a resort or destination. Bring in your industry and hotels and maybe a theme park or casino – give tax breaks. Heck, the last time folks decided to build something in the middle of the desert, Wayne Newton played there 25,000 times. 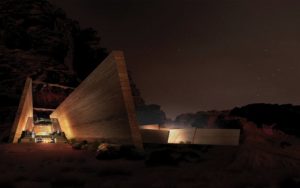 Writing this, I’m not quite sure how serious I am. It’s ridiculous to assume industry and businesses will flock to the wall because people are there, especially considering how toxic the very notion of working with Donald Trump is these days.

But, at the same time, it’d be….neat. At the very least a very, very, long stretch of rural land could see some economic infusion and modernization – possibly at the expense of America’s soul. The temporary jobs for building the wall could be turned into lasting ones in hotels or restaurants or movie theaters, or building those hotels and restaurants and movie theaters.

Regardless, this is a pipe dream I suppose. A cynical dream from the optimistic hope that something, anything, good could come from this blasted wall other than strife and vitriol, rage, girders and concrete and xenophobia.

And who knows, maybe one day David Copperfield will walk through the thing.