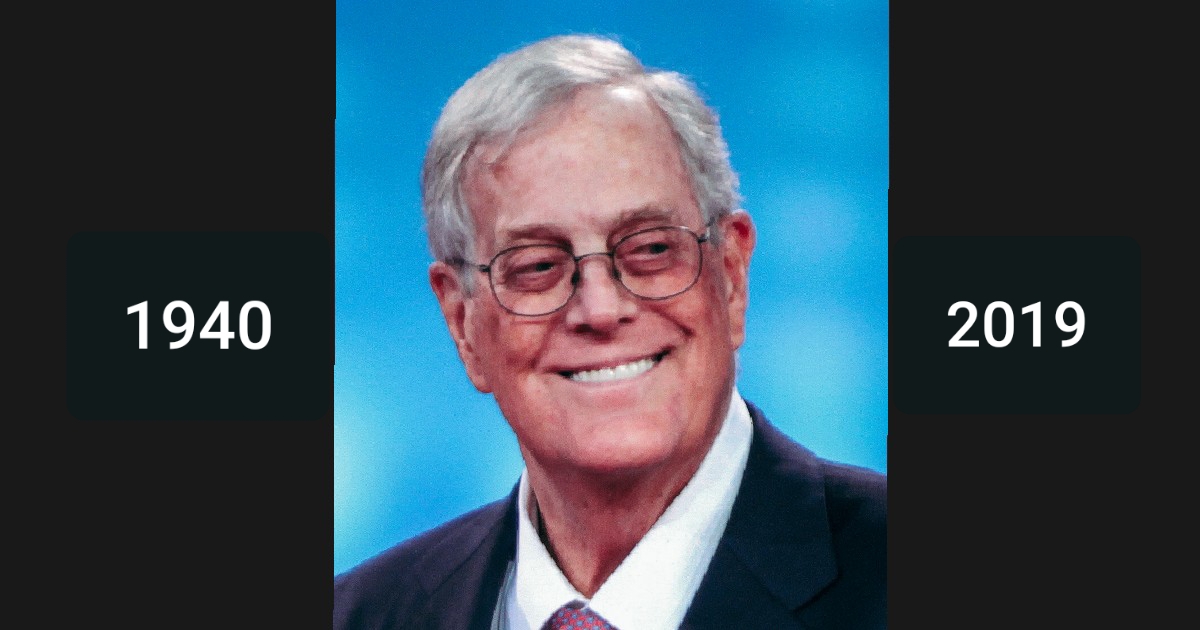 David Koch, billionaire businessman, libertarian activist, prolific philanthropist, and controversial conservative political donor, has died at the age of 79. He had been diagnosed with prostate cancer 27 years ago, and initially been informed he had only a few years left to live. His death was officially announced this morning by his brother, Charles Koch.

Charles got into the family business after receiving multiple degrees in chemical engineering from MIT, and in 1979 became president of his own division, Koch Engineering. He retired from the company last year over health issues.

He, along with his brother, are probably best known for their political contributions and wealth. David was worth roughly $50 billion at the time of his death, and had donated large sums of his wealth to both politics and philanthropy. Though libertarian in philosophy, he tended to focus in his later years on fiscal issues and candidates who could win electoral victories, which lined him up with the Republican Party, though he refused to support Trump.

He was the Libertarian Party’s vice-Presidential candidate in 1980 under Ed Clark’s ticket. At the time, he had advocated abolishing a wide range of federal government agencies including the Federal Reserve Board. His ticket was the most successful run of a Libertarian Presidential ticket in terms of both percentage and raw votes until Gary Johnson’s 2016 run. He left the party in 1984, however, when it went as far as advocating a complete end to all taxation.

His advocacy remained primarily libertarian in nature. He considered himself socially liberal but fiscally conservative. He supported gay rights back when they were unpopular, opposed the war on drugs, wanted to drastically shrink the state, supported a non-interventionist policy and opposed war, wanted a balanced budget and reduced regulations, and made large contributions towards criminal justice reform efforts. He continued to work within the two party system where neither party well-represented his ideas, and saw himself as forced to prioritize his principles.

He was the chairman of the board and major donor to several organizations, such as Americans for Prosperity, the Cato Institute, and Reason Magazine.

Outside of politics, he was one of the world’s top 50 philanthropists, though he often shied away from advertising his generosity. His largest charitable contributions were aimed at a “moon shot” campaign to find a cure for cancer, and other medical research causes. These included the Prostate Cancer Foundation, John Hopkins University School of Medicine, MIT, and dozens of medical research programs throughout the world. He also invested in the arts, education, PBS, and donations to and partnerships with organizations like the ACLU on issues such as criminal justice reform.

He may be best known as a convenient boogeyman of the left and a substitute for the supposed evils of money in politics, although  his donations appeared to be ideologically driven as opposed to being aimed at special favoritism for himself or his businesses.

David is survived by his wife Julia, three children, and a wide range of both political and philanthropic organizations he founded or supported.

The ideas and principles which were important enough to him to spend vast sums of wealth on promoting will live on.

How To Recover Files from a Corrupted Disk

China Strikes Back, Slaps 25% On US Automobiles After Trump’s ‘I Am The Chosen One’ Comments